The idea of using a blockchain for online identity and reputation is a key area of interest for many developers working on decentralized applications, and Onename is a company at the forefront of turning this concept into a reality. The identity platform, which was founded and created by Ryan Shea and Muneeb Ali, originally used the Namecoin blockchain for storing user data, but the company recently moved to the Bitcoin blockchain (by way of Blockstore). Shea and Ali were recently interviewed for an episode of Epicenter Bitcoin, and Ali stated, “We were one of the largest production systems built on top of Namecoin, and we started noticing certain limitations.”

Muneeb Ali went on to explain three specific limitations that the company found with Namecoin, which eventually led them to develop Blockstore and move over to Bitcoin. 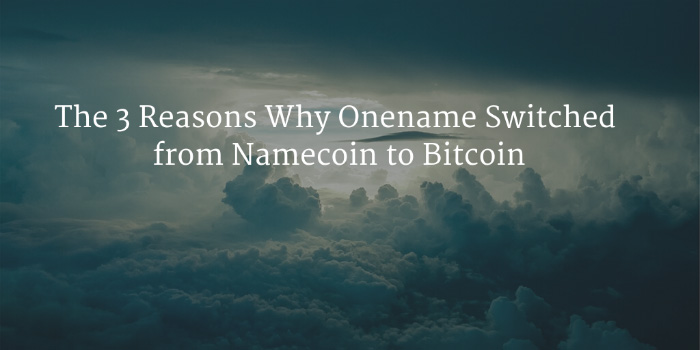 1. Spam Registrations on the Namecoin Network

The first issue pointed out by Ali during the interview had to do with the way new names are registered on the Namecoin blockchain. As Ali explained, the pricing algorithm was set when Namecoin was first launched, and it lacked the sort of sophistication that may be needed in a decentralized name registration system:

“Their pricing rules were baked in at launch, and it was very cheap to just buy a name. The pricing algorithm wasn’t very sophisticated. As a result, there was a lot of spam registrations on Namecoin. There is a paper that came out by Arvind [Narayanan], the professor at Princeton, and they analyzed how much spam registrations there are -- and I think the results were really surprising. I think less than 1 percent of names on the .bit namespace currently map to anything meaningful.”

Although Ali was extremely thankful and supportive of all the work that had been put in by the Namecoin development community over the past few years, he admitted that the lack of infrastructure around the Namecoin blockchain made it impractical to continue using it as a base protocol:

“Because Namecoin was an old fork and it didn’t keep up with all of the development that was happening with Bitcoin, the software was generally lacking stability, as compared to Bitcoin. The ecosystem of how many developers are working on Namecoin was much smaller than the number of developers working on Bitcoin. There are so many different companies, there are so many different block explorers or APIs, so just from an engineering perspective, it makes more sense to be part of an ecosystem that is well maintained and rapidly developed.”

3. The Centralization of Mining in Namecoin

The third problem pointed out by Ali during the Epicenter Bitcoin interview had to do with an issue that has plagued many altcoins: security. Namecoin uses the same hashing algorithm as Bitcoin (SHA-256), and it can be merge mined with Bitcoin. Ali explained Namecoin’s merged mining setup with Bitcoin during the interview:

“The third was actually a security issue where it turns out that Namecoin does merged mining with Bitcoin, so basically, some miners would mine both cryptocurrencies because it is the same hash that they’re calculating and they can get rewarded on two different chains. It turns out that merged mining is actually pretty hard because if the miner does not have that much incentive -- let’s say the value of the currency isn’t that much or the overhead required for them to actually run Namecoind nodes and integrate merged mining -- they feel like it’s not worth it to them given the reward that they’re getting.”

Although merged mining with Bitcoin should be helpful towards another blockchain’s security in theory, Ali noted that this has not been the case for Namecoin:

“So, practically what ended up happening is that one miner, F2Pool, has consistently -- they have more than 60 percent hashing power on Namecoin. And it’s a known fact. The Namecoin community knows about it, and they’re trying to address the problem. But, for us, it seems like if you are on the main Bitcoin blockchain, the amount of financial infrastructure and financial capital that is linked to the security of the blockchain is a lot more. So, a lot more people care if a single miner approaches 51 percent mining power, and there’s a lot of people who will try to do something about it. Whereas, in the case of Namecoin, this has been going on for many months, and so far, the community has not been able to do anything about it.”

There are still plenty of alternative blockchain proponents out there in Bitcoin land, but this is one of the clearest examples of why many alternative use cases of the blockchain may eventually be rolled back into Bitcoin. This trend may accelerate with the proliferation of sidechains, although it will be interesting to see if the same sort of merged mining issues found with Namecoin take place in that setup. Many Bitcoin supporters feel that there is only a need for one cryptocurrency on the Internet, but whether or not that hypothesis will hold true still remains to be seen.

Correction: A previous version of this article claimed Onename itself is a blockchain-based identity system. As /u/Justin_Guy pointed out on Reddit, Onename is a registrar for Blockchain IDs, which uses Blockstore.