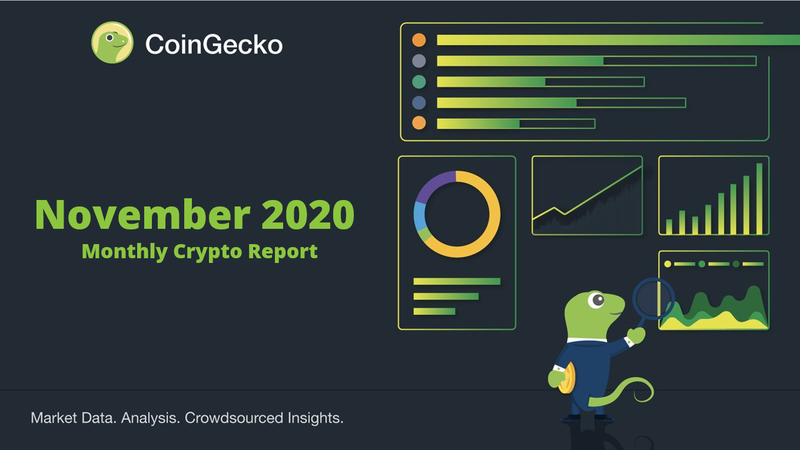 Our November Monthly Report is here!

It’s been quite a roller coaster ride this past month with so much going on in the crypto space. To name a few, Bitcoin (BTC) successfully hit a new All-Time High at $19,725, DeFi protocol hacks that cost nearly $70 million in losses, as well as a new yearly high in open interest for the Bitcoin Derivatives market.

In addition to that, we saw large financial corporations such as Square, PayPal, and DBS Bank continue their efforts in adopting it as part of their hedging strategies.

Here are our 5 key crypto-highlights for November: 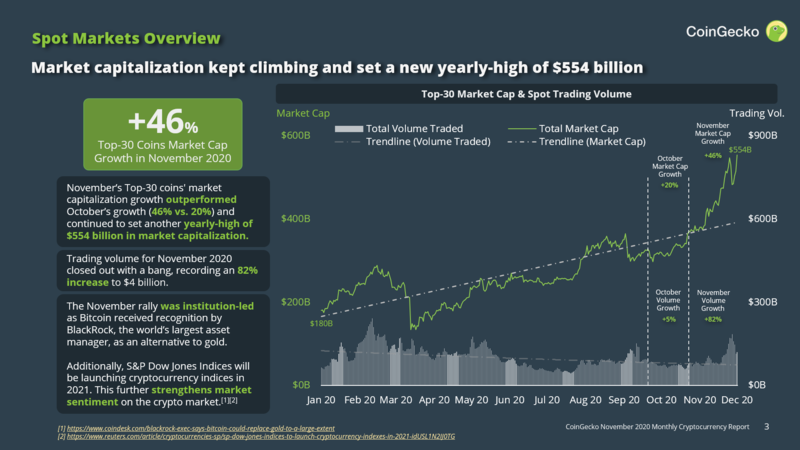 The market has outperformed October’s growth (46% vs 20%) by recording yet another year high at $554 billion, far surpassing the previous high of $378 billion. Furthermore, the trading volume saw a whopping 82% increase from the previous month. 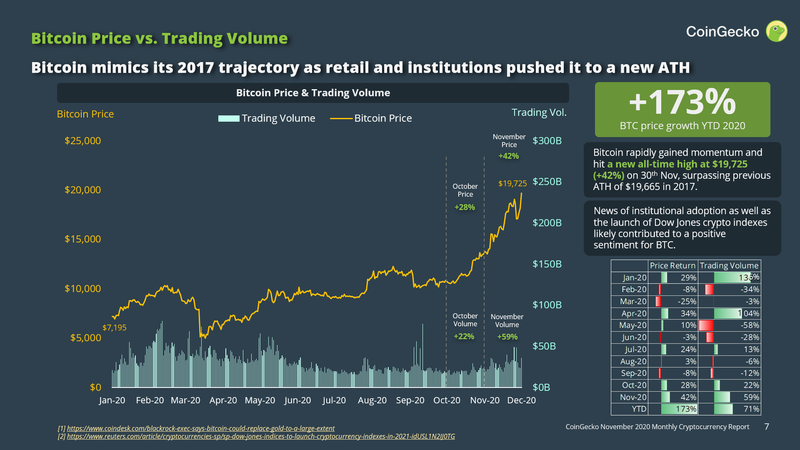 Akin to the market’s performance, Bitcoin has also achieved a new record by reaching a new ATH of $19,725. This comes 3 years after setting its previous high of $19,665 and is likely due to the influx of institutional investors as well as the anticipation for the launch of S&P Dow Jones Indices set for 2021. It is very likely that news related to mainstream or institutional adoption has heightened the positive sentiment towards the crypto market, particularly that of Bitcoin. 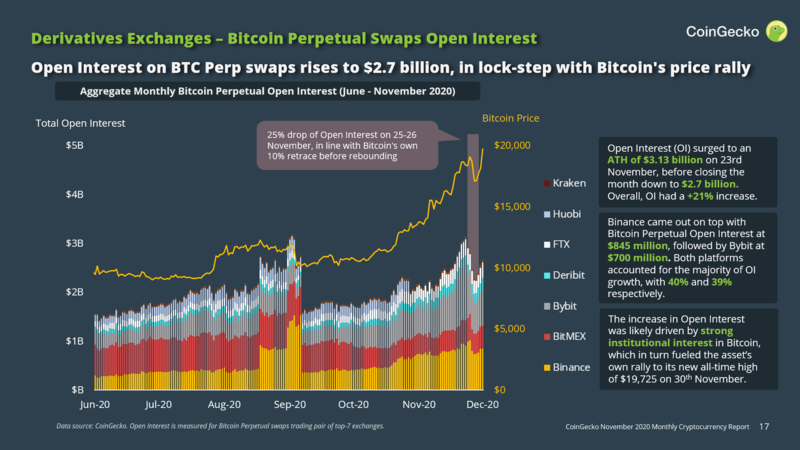 With Bitcoin’s recent rally comes volatility and along with it an uptick in market participation on Bitcoin Perpetual Swaps. The open interest (OI) for top exchanges hit a new yearly high of $3.1 billion on the 23rd of November. Despite closing the month slightly lower at $2.7 billion, it still represented a 21% increase in terms of month-on-month growth.

Binance and Bybit emerged as the November sharks with a massive growth of 40% and 39% increase in OI respectively.

4. Alts showed strength as XRP, AAVE and YFI had more than 150% return 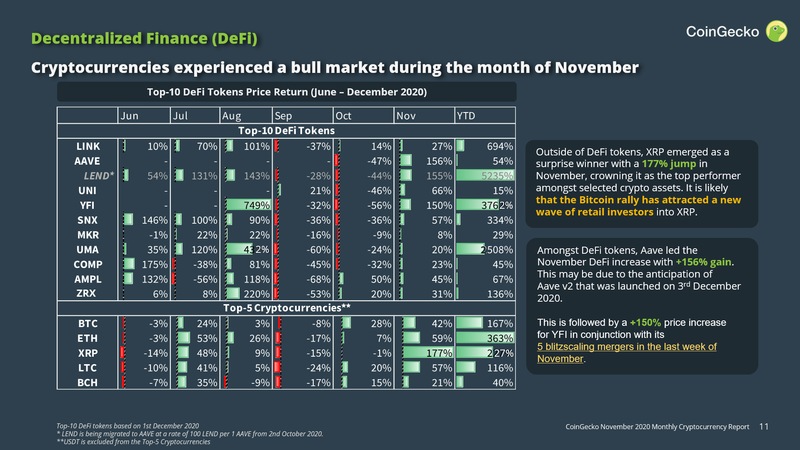 Moving on, while Bitcoin rallied with a 42% increase in November, other major altcoins also displayed strength. XRP(XRP) was a surprise winner with an impressive 177% month-on-month rise, suggesting that there may be a surge of retail investors.

This was also closely followed by Aave (AAVE) and Yearn.Finance (YFI) who saw price returns at 156% and 150% respectively. Aave’s growth was likely fueled by its protocol’s version 2 launch, while YFI’s growth was spurred by its merger and acquisition spree. In fact, YFI is already working with Pickle Finance (PICKLE), Cream (CREAM), Cover Protocol (COVER), Akropolis (AKRO) and SushiSwap (SUSHI).

Overall, November has been a productive month of growth for all coins in the market. 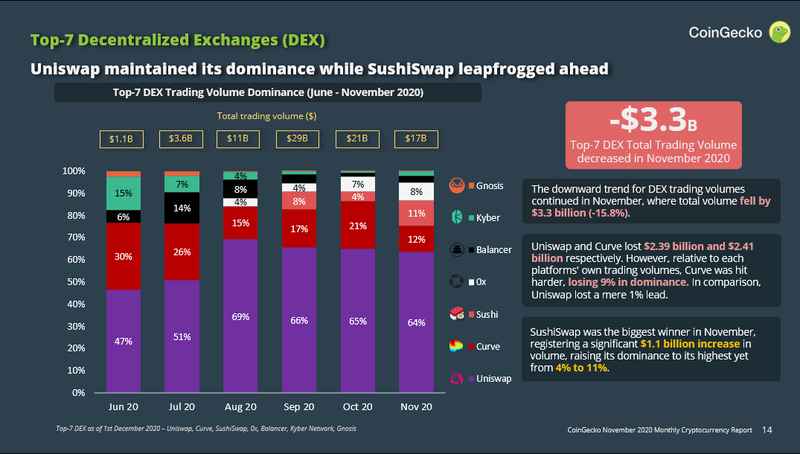 Unfortunately - despite gains in trading volume in the industry, decentralized exchanges (DEX) experienced a $3.3 billion (-15.8%) drop in volume from October with a total trading volume of $17 billion. Both Uniswap and Curve Finance bore the brunt of the losses with a fall of $2.39 billion and $2.41 billion respectively. Meanwhile, Sushiswap is the only winner with a $1.1 billion increase, raising its dominance to its highest yet at 11% (previously 4%).

This is just a fraction of what we cover in our report - Grab your own copy of the full report:

(Psst! CoinGecko users can easily grab this and past reports right here!).

Like what you see? Here are two ways you can get more: