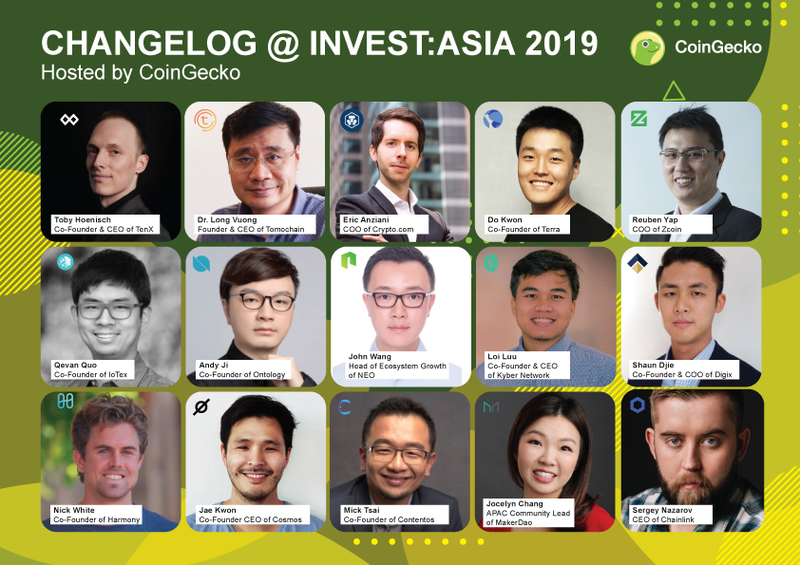 Changelog was a platform held during Coindesk's Invest:Asia 2019's conference for industry-leading crypto projects to share their updates and developments.

Here are spotlights on some of these featured speakers where they introduce their projects and a quick overview of what they presented.

Reuben is the Chief Operating Officer (COO) of Zcoin. Prior to his foray into the cryptocurrency space, Reuben have been operating one of South East Asia's largest VPN provider whilst working in a legal firm he co-founded for than a decade. Reuben is an early adopter of cryptocurrencies being the first merchant in Malaysia to accept bitcoin and other altcoins back in 2012.

Loi holds a Ph.D in Computer Science from the National University of Singapore and has published multiple academic papers on blockchain technology. Loi is also included in the Forbes' 30 Under 30 Asia list in 2018. Before co-founding KyberNetwork, Loi was the blockchain advisor of Kambria, an open source DAO focusing on development and adoption of advanced robotics system.

Do Kwon, Co-Founder of Terra

Shaun is the founder of the Ethereum Singapore meetup group - one of the largest in the world with over 8,000 members.  He is currently a Technical Committee Board Member at the IT Standards Committee (organised by IMDA and Enterprise Singapore for Blockchain and Distributed Ledger Technologies) and is also a Regional Partner at Kenetic Capital - an institutional platform for blockchain advisory, technology and investment. Shaun also co-authored Cryptocurrency Wizards (2018) covering the testimonials of movers and shakers in the Asian cryptocurrency ecosystem.

A serial entreprenerial with a Masters of Science Degree in Computer Science - Artificial Intelligence, Toby has founded and led various tech startups in the Tech and Fintech industry. All of which culminated to the foundation of TenX, which brings him closer to his mission to bring the massive benefits of blockchain to the masses.

Jocylen is currently the APAC Community Lead for MakerDAO, leading the marketing initiatives and business development efforts in the Southeast Asia region. Jocelyn started her career at HSBC as a banker and she also co-founded a social networking app in Singapore. As part of her entrepreneurial journey, she also pioneered the implementation of a public warning system in Singapore with MHA. Her mantra is to embrace new technologies that makes the world a better place.

Eric has extensive experience in prestigious tech companies and startups prior to his position with Crypto.com.

A PhD candidate in economics of the University of Massachusetts. Long is also the co-founder and the former project lead of NEM blockchain prior to creating TomoChain.