If you're serious about keeping a portion of your wealth in cryptocurrency, you should know that the best policy is to keep your cryptocurrency where you have control of your private keys. After all, your keys, your coin; not your keys, not your coin. In contrast to the early days of needing a full node and downloading the whole blockchain, today it's easier and much more user-friendly to maintain a wallet with your own private keys.

In this review, we will look at a new type of “hybrid wallet” that is user-friendly yet offers security on par with that of a hardware wallet. CoinUs offers an easy, secure way to handle your cryptocurrency – a method that provides the ease of hot wallets and the security of hardware wallets. It does this through its first-in-kind hybrid wallet: the CoinUs Keeper. The folks at CoinUs were gracious enough to send us a CoinUs Keeper for our review.

CoinUs is a brand from Korea that aims to simplify the way in which users manage the complexities of today’s cryptocurrency world. To date, the company has introduced 2 products that will be the foundation of its future CoinUs ecosystem: the CoinUs Wallet app and the CoinUs Keeper dongle.

The Keeper is not a standalone device, as the term “hybrid wallet” already implied. It divides and stores data. Hence, if you lose your phone or Keeper (or both), you don't have to worry about someone else trying to conduct a transaction 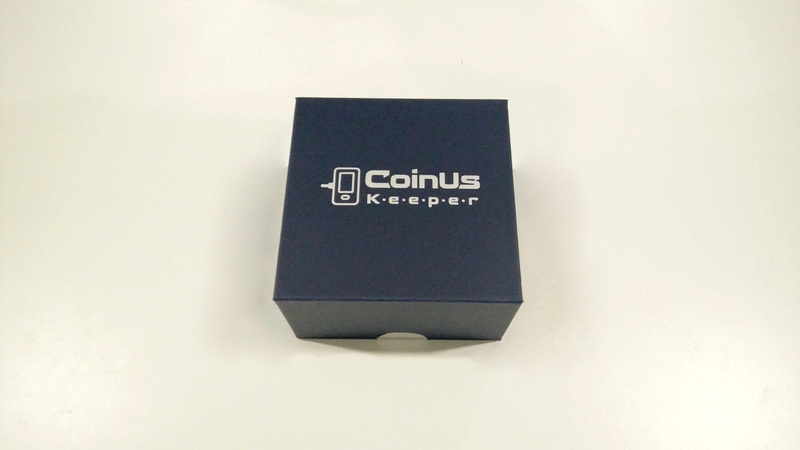 The device arrived in a blue box with a silver-printed “CoinUs Keeper” name and logo. The box measured approximately 9 x 9 x 5.5 cm. 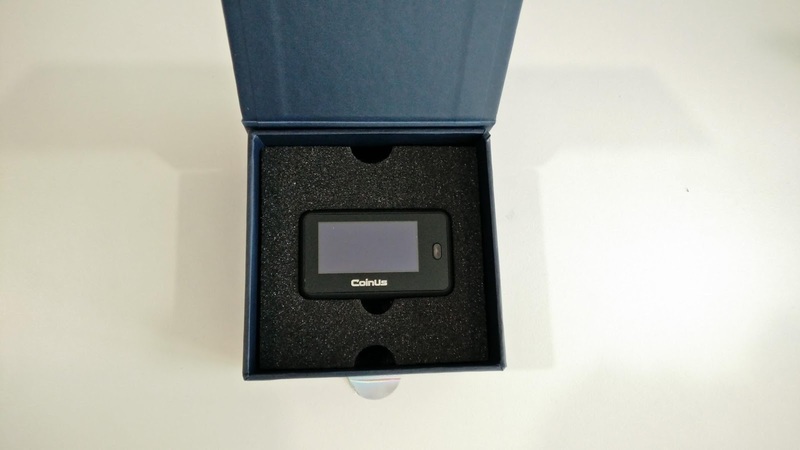 The Keeper itself was placed snugly inside protective foaming. Underneath it, CoinUs included a roll of USB to USB-C cable. 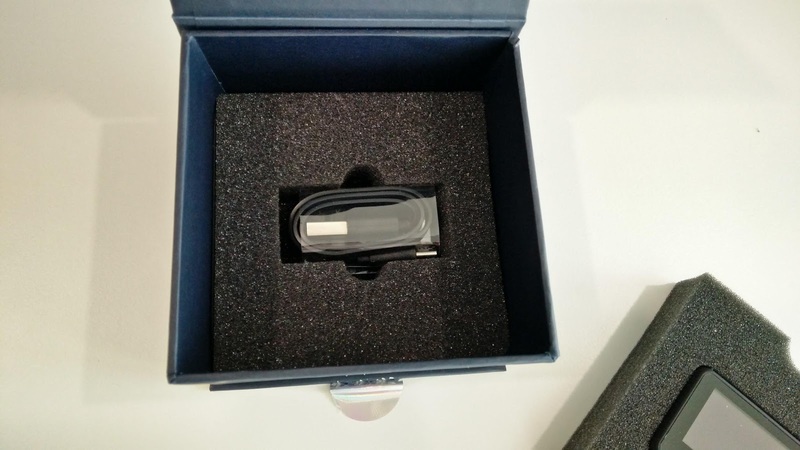 Here are the full contents of the box: 1 CoinUs Keeper, 1 USB to USB-C cable, 1 English pamphlet and 1 Korean pamphlet. You’ll notice that the back of the pamphlet is meant for writing down the mnemonic seed phrases, which we will touch on later. 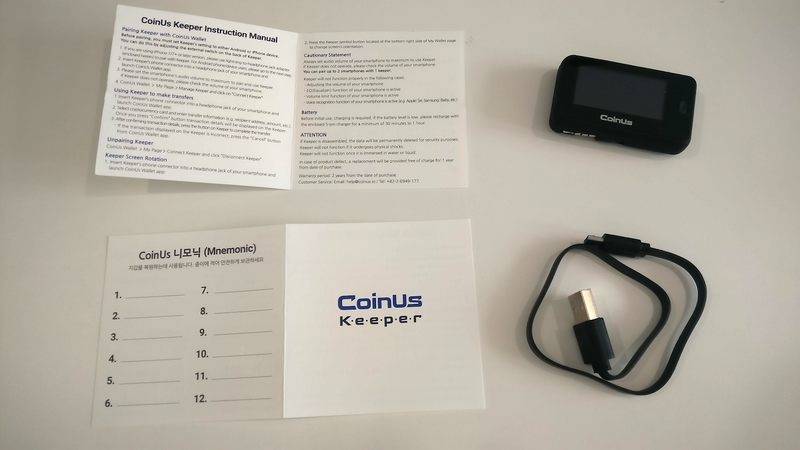 The Keeper itself measures 5.5 x 3.5 x 1.3 cm and feels like a McNugget in your hand. It has a front-facing screen measuring 4 cm diagonally. You’ll see a button on the right side of the screen. This is the button you will press to confirm all actions requiring a Keeper confirmation. The Keeper has a foldable 3.5mm audio jack at the bottom, which you will use to connect to your smartphone, a USB-c port at its right side, and an interface switch behind. You must toggle the interface depending on which smartphone OS you are using (Android or iOS). 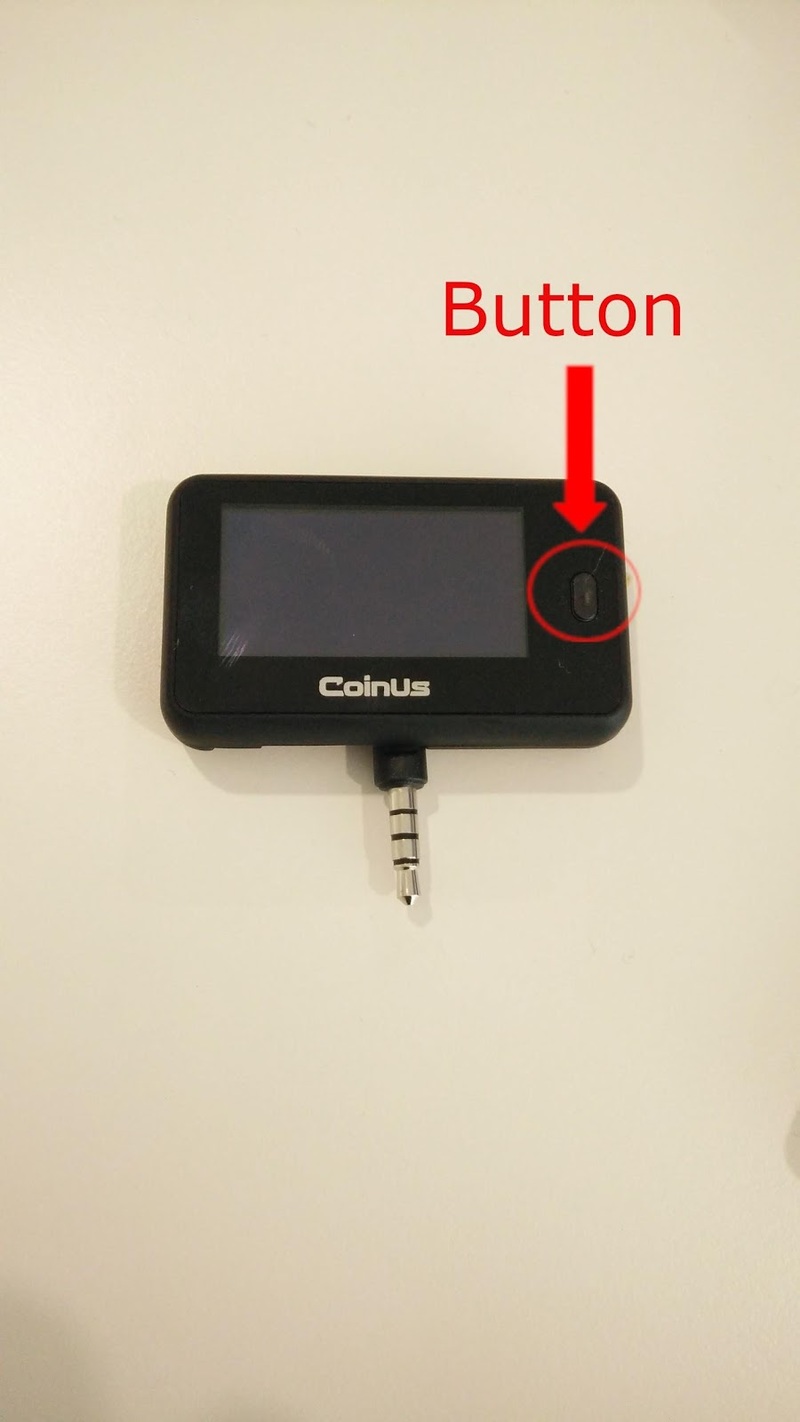 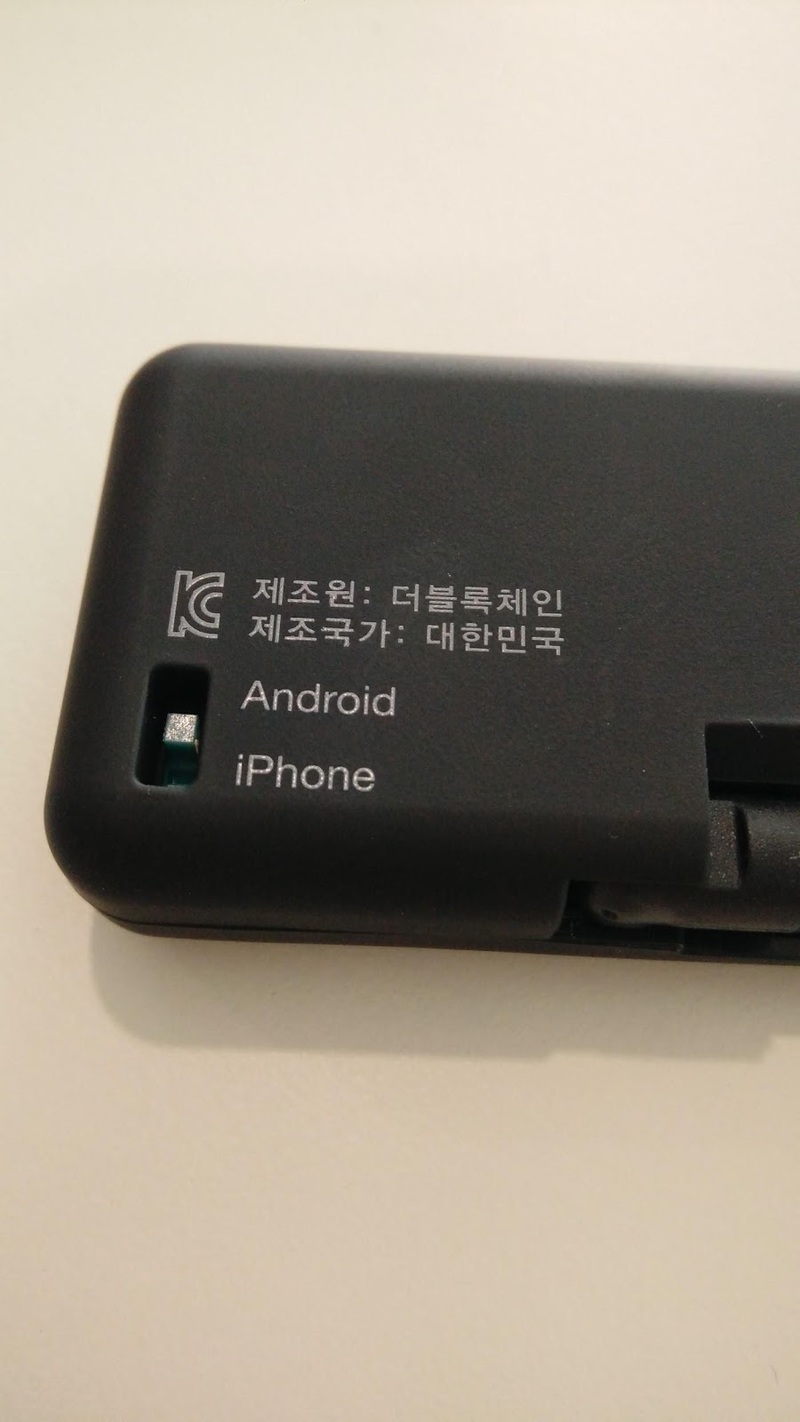 Why use an audio jack?

I actually wondered the same thing. That is why I approached the developers at CoinUs. Here’s what they said:

“Currently we support earphone jack. The main reason was security and the other is to provide mobility when keeping high security level. In terms of mobility, we've decided to go with the earphone jack since everyone has a phone. In terms of developing other ways to connect, our developers are always researching to find better ways to bring mobility and security in the best way possible. USB and OTG is [definite]”

Seeing as how the Keeper already has a USB-C port built in, perhaps that is what they planned. CoinUs also said that the Keeper is somewhat of an MVP, and that, along the way, the company would be coming up with devices that have better specs.

For a sense of scale, here’s what the Keeper looks like beside a OnePlus 6. 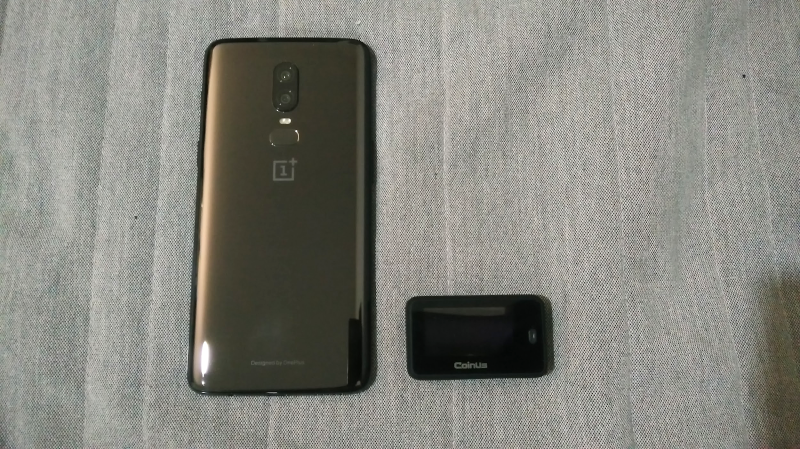 As stated, the Keeper requires the CoinUs Wallet app to work. You should not think of the Keeper as a full-on hardware wallet but rather as a dedicated 2FA device to step up your wallet app’s security. In this setup, both the phone and the Keeper are essential to making the transaction possible.

Each phone can recognize only 1 Keeper, while a Keeper can be coupled with up to 2 phones. However, it is recommended that you pair a Keeper with only a single smartphone.

After downloading and installing the app, I was greeted with the opening page, which asked me whether I wanted to create a new wallet or recover one from seed or QR. I pressed “Create Wallet” and was asked to set up a 6-digit PIN code twice. Don’t ever forget this PIN code, as you will use it for every single action pertaining to your CoinUs Wallet. This PIN code also serves as the last defence if both your phone and your Keeper are compromised. 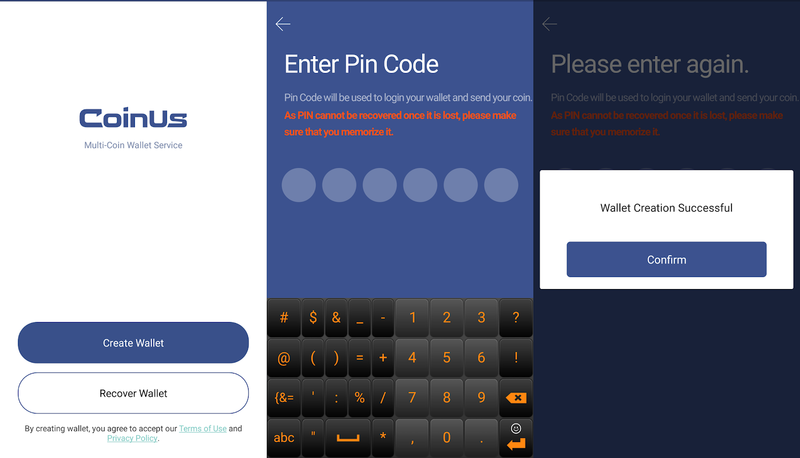 You will be asked to save the backups in Mnemonic 12 word seed phrase and QR format. 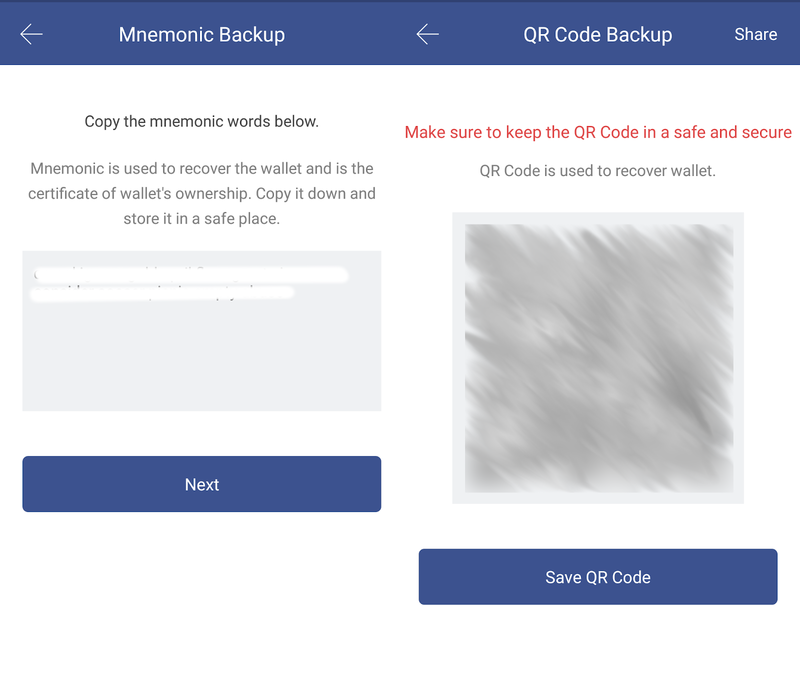 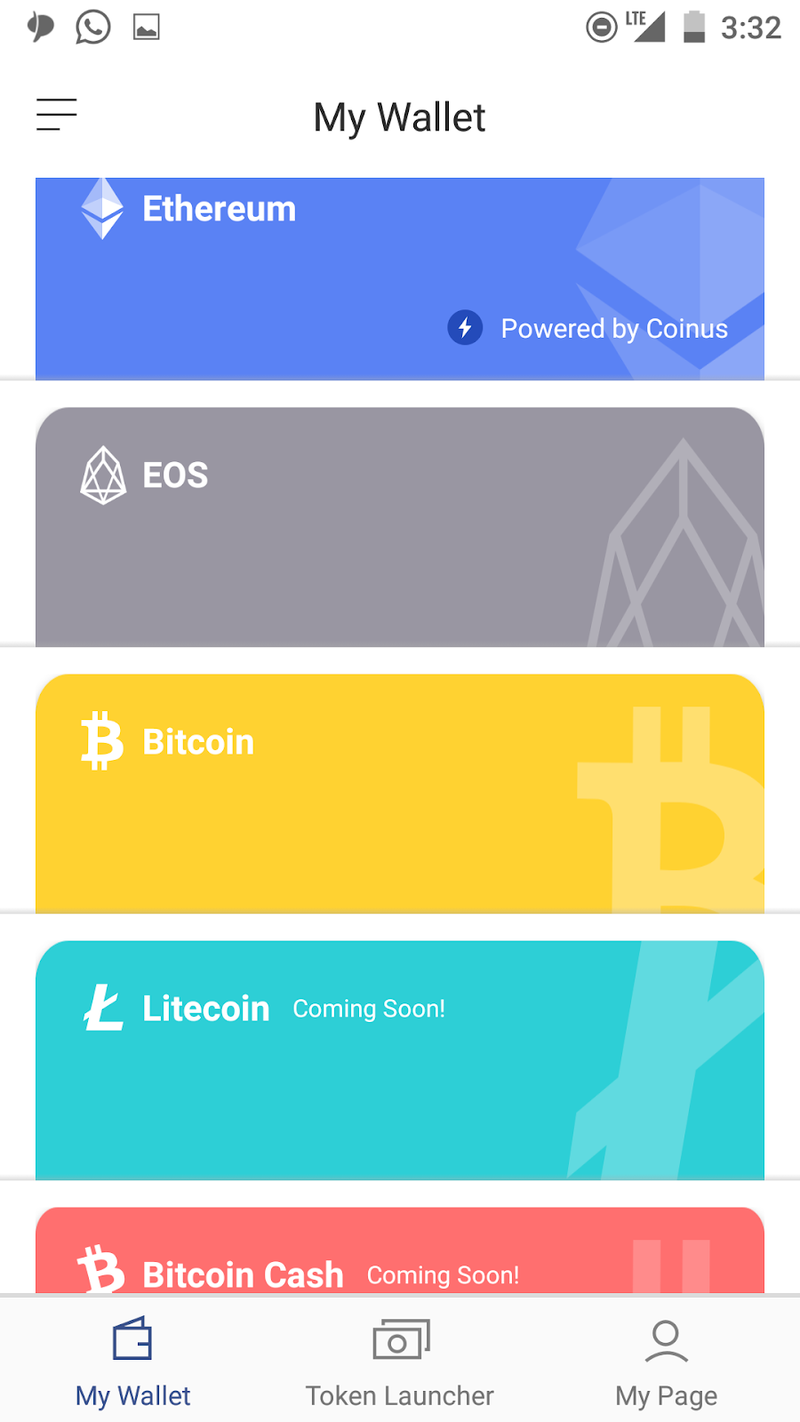 The CoinUs Wallet is a multi-coin-supported light client wallet. Currently, you can receive, store and send;

Support for Bitcoin Cash and Litecoin is coming soon. The developers behind CoinUs have also promised to add more support if there is community demand for it.

Creating a wallet address in the wallet is the same across all coins (except EOS, which requires that you first have an EOS account). For this review, I'll be creating an Ethereum wallet in 3 easy steps.

Simply press on the coin you want, press “Add Card”, choose a name for the new card and voila: you have an address and can now send and receive coins.

Apparently, you can use the CoinUs Wallet app all by itself. However, unlike most other mobile wallet apps, CoinUs is the first mobile wallet app to have a dedicated “transaction-signing one-time password (OTP)” device. We’ll take a look at how this works.

To start using the Keeper with your CoinUs Wallet, open the app and go to “My Page” > “Manage Keeper”. Here, you’ll see the status of the Keeper on your phone. 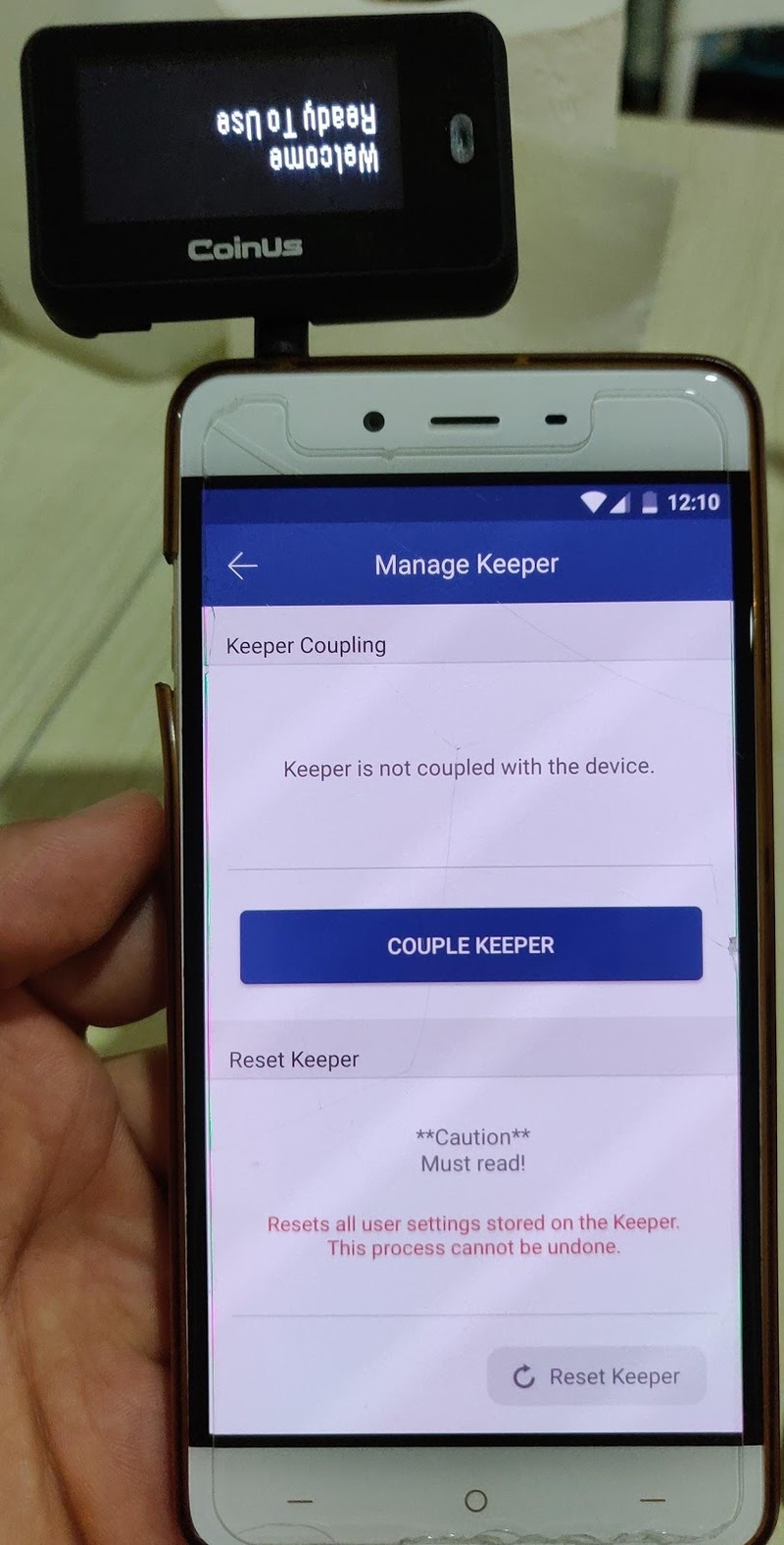 To couple the Keeper with your phone, simply press “Couple Keeper” and follow the on-screen instructions below. 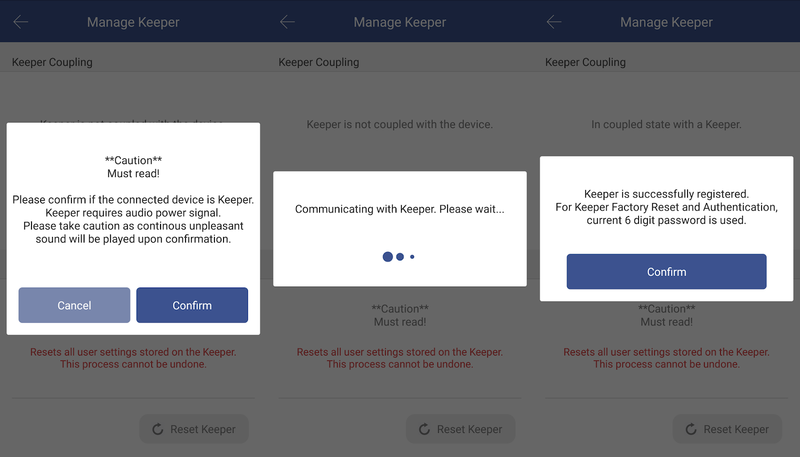 Depending on where the audio jack is located on your phone, you can change the orientation of the Keeper’s screen within the CoinUs app. 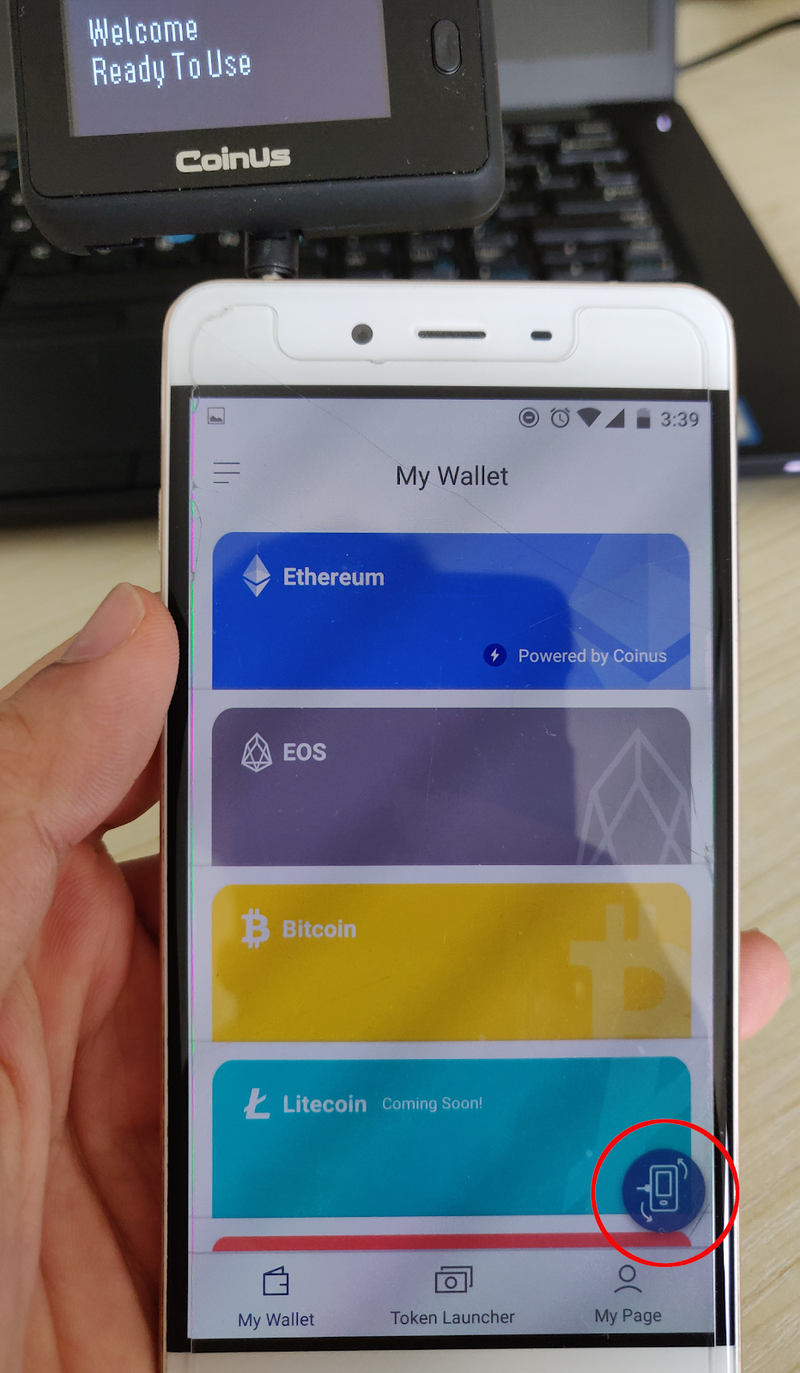 For purposes of this review, I will be sending a small amount of ether. I’ve loaded some ether to the address using MetaMask like I would any Ethereum address. Then, on the CoinUs app, I key in the receiving address, amount and fee allocation. Remember that allocating higher fees gives your transaction a higher chance of being placed in the next block. 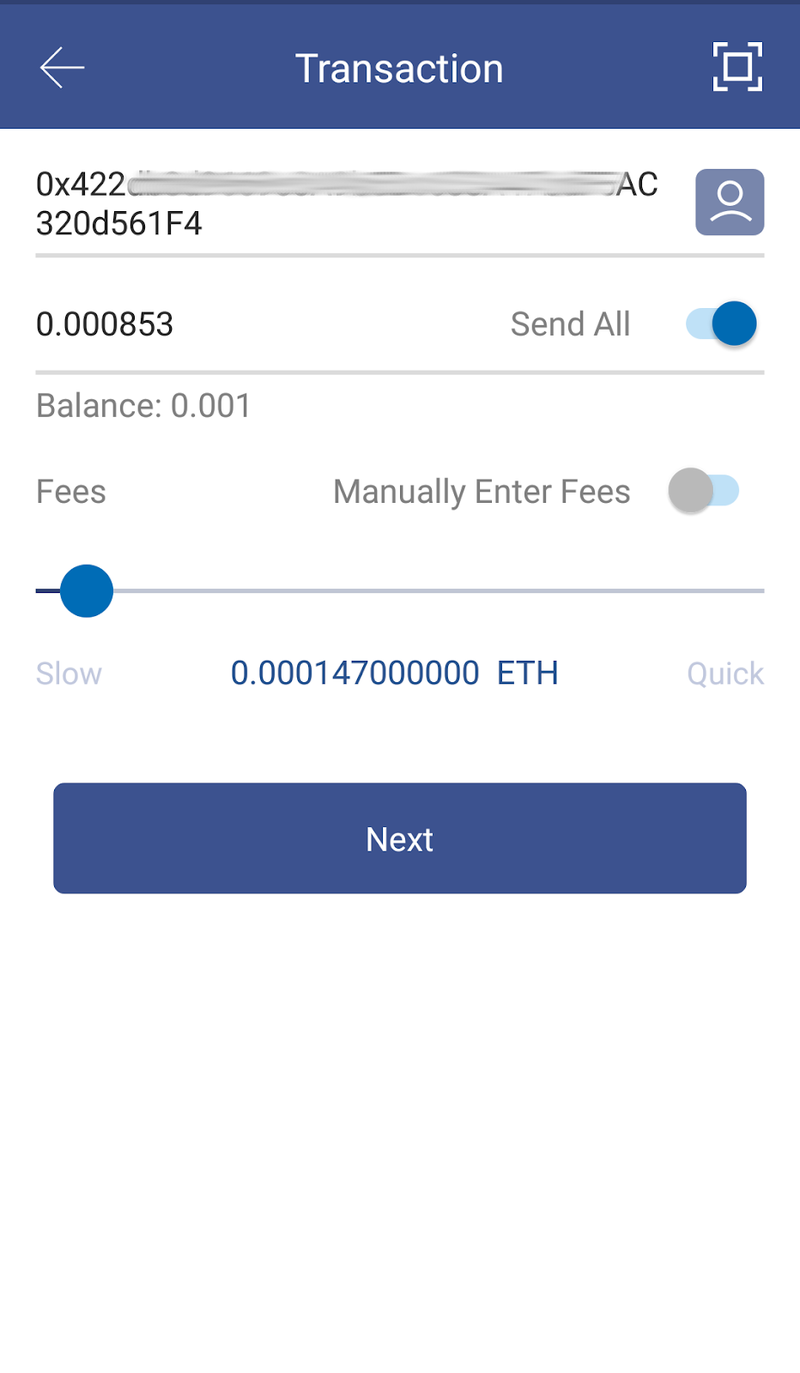 Once you’ve confirmed that all the details are correct, press “Next”. You’ll be prompted to press the Keeper Button.

Once you’ve coupled a Keeper to your CoinUs Wallet, every action that involves signing your keys requires the Keeper to be connected. I tried to send some Ether from the app without plugging in the Keeper. I managed to get to the transfer page but when I pressed “Confirm”, a warning popped up, telling me that the Keeper was not found and that transactions weren’t possible until I connected the Keeper. 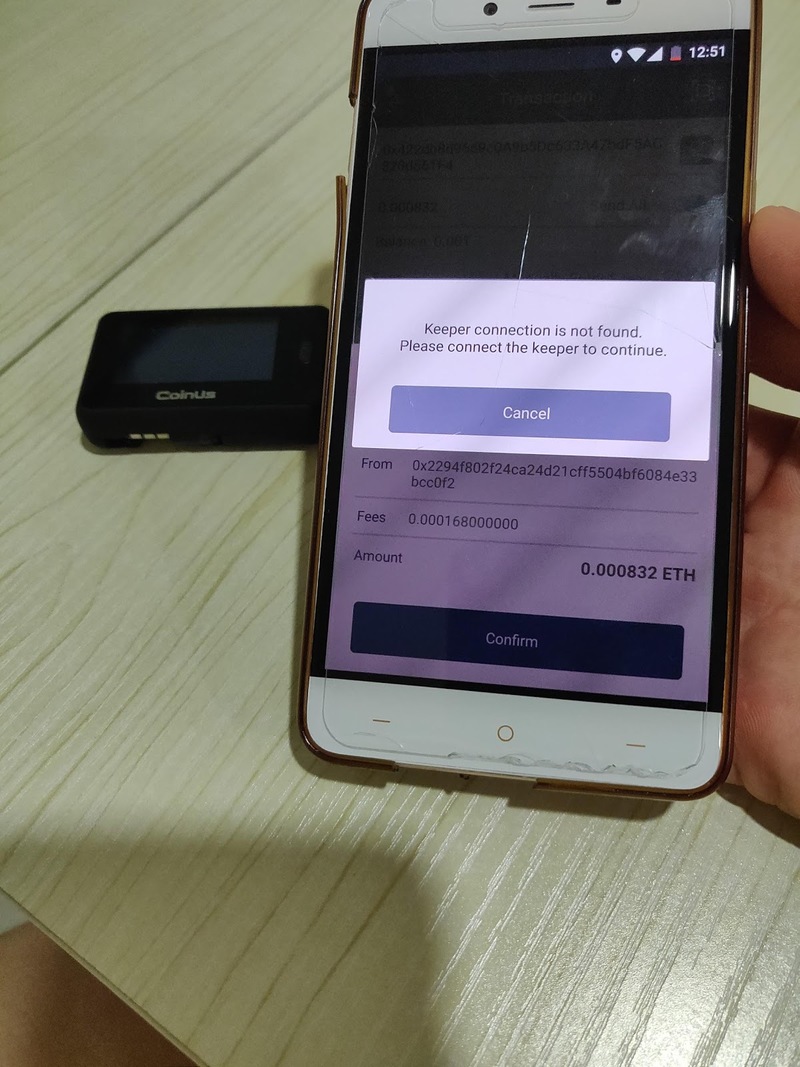 This serves as a second layer of protection if your phone gets stolen and the bad guys are trying to syphon away your cryptocurrency.

I had 2 concerns while reviewing the Keeper;

There is much potential as to what the Keeper can do. It’s certainly designed with user-friendliness and simplicity in mind. The Keeper is suitable both for beginners looking to experiment with cryptocurrency and for long-time users who want the ease of sending cryptocurrency from their smartphones with an added security feature.

I personally will use the Keeper only as a hot wallet rather than storing the bulk of my cryptocurrency for long-term keeping. It is user-friendly enough that even complete beginners can use it like they would an E-wallet app. I hope CoinUs will fix the above 2 pain points in their next update.

About Kristian Kho — Market Research Analyst at CoinGecko and cryptocurrency fan since 2014. I like to geek out about things in the crypto space. You can read some of my stuff at kristiankho.com. Follow the author on Twitter @Kristian_Kho