If you are residing in Australia and are interested to jump onto the crypto bandwagon, here are six bitcoin exchanges in Australia that you may want to consider.

Global multi-asset investment platform eToro has been offering its 10 million users, spanning 140 countries, the chance to trade bitcoin since 2014, seven years after the pioneering organisation launched.

In early 2019 there are 14 cryptocurrencies on offer – including Binance Coin (BNB), Stellar (XLM), IOTA (MIOTA), Cardano (ADA) and more.

Yoni Assia, Co-Founder and Chief Executive of eToro, set up the organisation with the goal of making it more straightforward for people, ranging in trading experience, to establish a portfolio. The platform is intuitive, user-friendly, and the ability to post messages to top-ranking traders on the network – as well as match their trades with the unique CopyTrader fuction – allows novices to learn strategies and tips.

In May 2018, eToro upgraded all existing, non-leverage crypto positions from CFDs so that the holders were granted ownership of the underlying asset. More recently, in November 2018, eToro rolled out its cryptocurrency wallet to Android and iOS users. Initially, the wallet will support bitcoin, bitcoin cash, ethereal, and litecoin, though there are plans to include other cryptos in the near future. 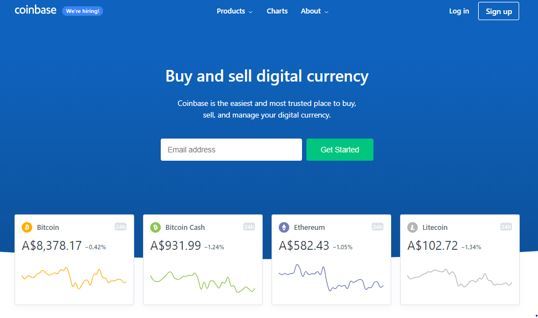 Coinbase, which is based in San Francisco is considered by many to be the most beginner friendly exchange. It is recognised as one of the world’s premier cryptocurrency exchanges and wallet platforms. According to a report by Washington Post, Coinbase now manages over 20 million customer accounts, which is nearly as many as Fidelity Investments and twice as many as Charles Schwab. It is also currently available in 33 countries.

Coinbase charges 1.49% fees on bank purchases and 3.99% fees on credit and debit purchases. It accepts credit card and debit card with more than 50 type of currencies.

Coinbase also has a trading platform for professional traders known as Coinbase Pro. It was recently rebranded from GDAX (Global Digital Assets Exchange).

Coinjar is a popular Bitcoin wallet in Australia. In fact, it was based in Australia when it first started out. However, the company has relocated its physical headquarters from Melbourne to London in December 2014 to avoid GST charge on bitcoin transactions. According to their webpage, Coinjar currently has over 150,000 customers and have processed over S$100m worth of transactions.

Asher Tan and Ryan Zhou cofounded Coinjar in 2013. Asher has a background in economics and was formerly providing analysis on company financial performance to leading business magazines. On the other hand, Ryan Zhou is a veteran entrepreneur and has founded several successful startups.

BTC Markets is an Australian cryptocurrency exchange based in Melbourne. It was founded in 2013 by Martin Bajalan and other members of the Australian chapter of the Bitcoin Foundation. It aims to be a simple, reliable and professional place for users to trade cryptocurrencies.

You can transfer funds to BTC Markets via bank transfer or BPAY. It receives Australian Dollar and allows users to trade bitcoin, bitcoin cash, ethereum, ethereum classic, litecoin, and ripple. BTC Markets charges a maximum fee of 0.85% for trading digital assets with the Australian Dollar. The rates are cheaper if you trade larger volumes. Fees for crypto-to-crypto trades are cheaper at 0.22%.

Coinspot, which was founded in 2013, is one of the most popular and well-known exchanges in Australia. Coinspot was founded by Russell Wilson, an Australian software engineer. He initially started CoinSpot as a free online wallet that allows users to store their crypto.

As time goes by, Coinspot has developed into an important shopping point for other cryptocurrencies especially bitcoin, litecoin, and dogecoin. As one of the leading exchanges, Coinspot allows users to buy, sell and trade bitcoin and many other altcoins. It accepts Austrlian Dollars in its platform and allows users to pay by cash, BPAY, POLi and any other cryptocurrencies.

Coinmama users are only allowed to buy seven cryptocurrencies, namely bitcoin, ethereum, ethereum classic, bitcoin cash, litecoin, cardano and QTUM. It allows customers in almost every country to buy bitcoin with a credit or debit card. They charge a fee of around 5.5% on each purchase. If you are buying an amount of less than $150, you do not need to verify your identity. It makes small purchase quick and easy and convenient to use. Read our step-by-step guide to using Coinmama.

Independent Reserve is an Australian bitcoin and cryptocurrency exchange, geared towards traders and corporations. Founded in 2013 in Sydney, its mission is to transform cryptocurrency technology into secure, robust and regulated financial services.

Independent Reserve is fairly easy to use. To make use of this platform, all you need to do is to simply create an account and verify your identity. You can buy bitcoin, bitcoin cash, ethereum, litecoin and ripple using the Independent Reserve. It supports a fair range of payment methods and accepts Australian Dollar, New Zealand Dollar and US Dollar. Maximum fees charged is 0.5% but may fall to as low as 0.1%, depending on your trading volume. There are no deposit limits for Independent Reserve, but some minimum withdrawal limits are set: 0.001 BTC, 0.1ETH and 0.01BCH.

About Kent Chong — Kent is a freelance writer specialising in the equities market. He is also interested in blockchain technology and cryptocurrencies.