6 Alternative Places for Bitcoin Discussions with No Censorship 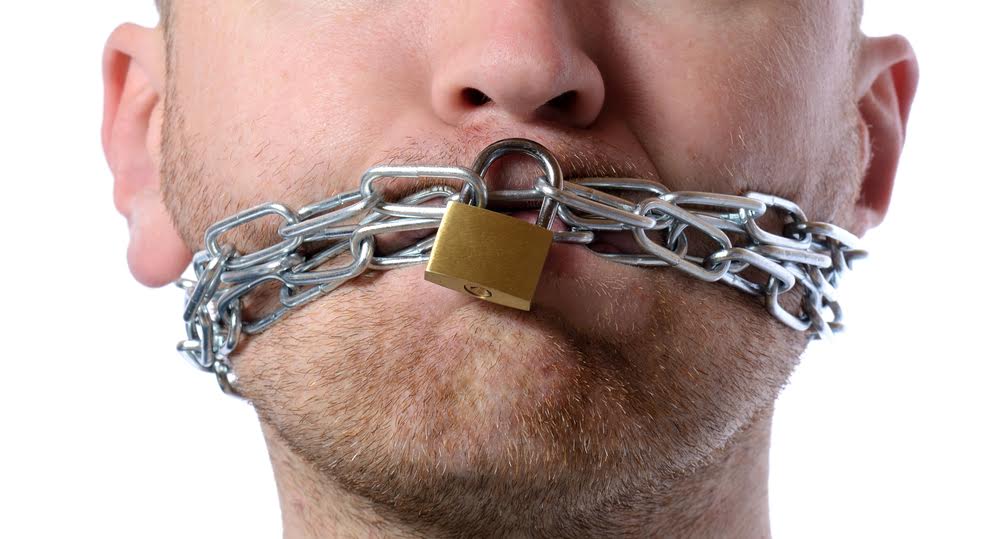 There have been a lot of disagreements on Bitcoin forums lately concerning the Bitcoin block size increase with various BIP proposals being put on the table. Two of the biggest discussion boards, /r/bitcoin subreddit and bitcointalk.org have been hosting the most intense debates so far.

Unlike the digital currency itself, the conversation surrounding it is unfortunately not decentralized. There is a moderator who is solely in charge of most of the discussion forums and his name is Theymos. Theymos has been in the cryptocurrency community for a long time and you can see his online persona throughout many topics.

Theymos has been an administrator to the Bitcoin Wiki, Bitcointalk.org, /r/bitcoin, Bitcoin.org, and Bitcoin.it. Bitcointalk started out as a fork from the original SourceForge (SF) forum that acted as one of the first discussion platforms for Bitcoin. Bitcointalk was created after the original SF forum disbanded and discussions moved to bitcoin.org/smf. The bitcointalk.org domain name is under the control of Sirius a.k.a. Martti Malmi who allows the forum to be moderated by Theymos and volunteers. 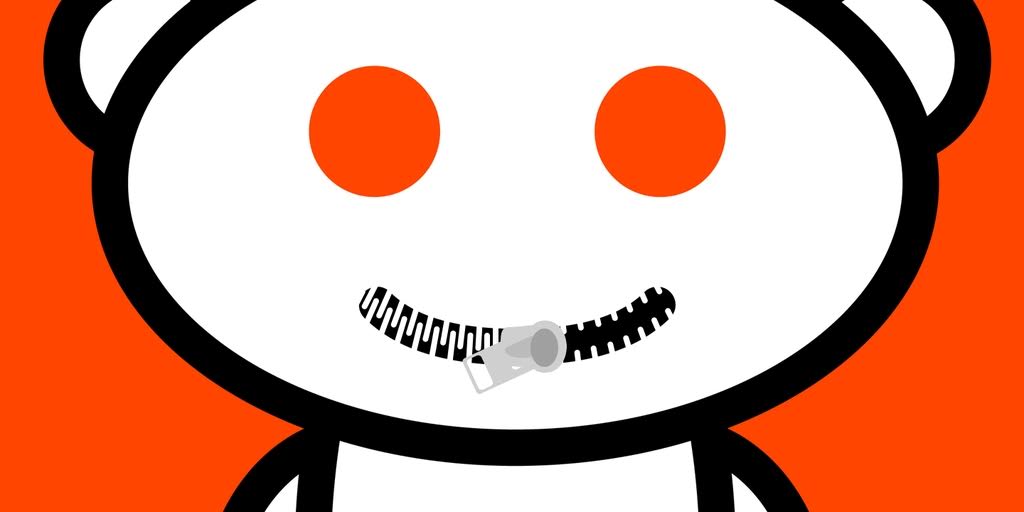 There were issues brought up in the community several times about Theymos's leadership roles in various Bitcoin communities that have led many to believe the discussion realm is quite centralized. Over the course of the past few months, there have been many complaints directed at Theymos concerning censorship on /r/bitcoin and Bitcointalk. Many people from various companies, organizations and common users have criticized these outlets for shadowbanning threads and commentary regarding BIP proposals and Bitcoin XT discussion. In a stickied post held on /r/bitcoin, Theymos explains his position which was downvoted to oblivion. He states:

“/r/Bitcoin exists to serve Bitcoin. XT will, if/when it’s hardfork is activated, diverge from Bitcoin and create a separate network/currency. Therefore, it and services that support it should not be allowed on /r/Bitcoin.”
— Theymos, Lead Moderator r/bitcoin

Community members and various news publications have voiced their opinions about the censorship on /r/bitcoin. Many have pointed out the irony of having a centralized area for discussions for a decentralized technology. There have been industry leaders such as Brian Armstrong of Coinbase and Roger Ver who have spoken up against discussion censorships. However, it seems that Theymos and fellow moderators have decided through their signals that users either put up or shut up and if they are really unhappy, to start forming other competitive forums.

“If you think that you can do better, try competing instead of complaining.”
— Theymos, Lead Moderator /r/bitcoin 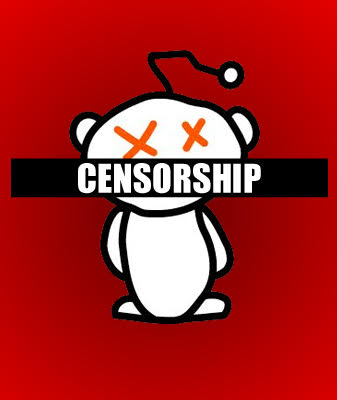 The Competition Is Here

It seems like the Bitcoin community will not take censorship lightly and users are beginning to actively promote alternative forums. Below is a list of six discussion forums that Bitcoin users can join to have discussions.

The creators and moderators of Bitcoin_Uncensored produced a subreddit that claims to be 100% uncensored when it comes to threads and commentary. The group believes that there should not be one centralized source of Bitcoin information, and they say, “especially one where the moderators censor posts and comments to fit their agenda”. The forum has a total of 2,900 subscribed users and has seen some small growth.

Mike Hearn’s Bitcoin XT has caused quite a bit of drama amongst all the proposals for the Bitcoin block size increase. This is one big reason for the censorship and shadowbanning happening at /r/bitcoin. Censorship and overall migration from one side of the debate has caused the creation of this new subreddit called /r/bitcoinXT. This subreddit has a population of 13,246 Bitcoiners and has seen increases since the XT fork itself has been announced.

The Let’s Talk Bitcoin (LTB) platform has been a community favorite for sometime. The podcast’s founder Adam B. Levine published the first episode in April 2013. From there, Levine have transformed LTB to what he calls an “experimental community platform". The LTB Network forum itself has almost 12 thousand users and has a substantial collection of threads and podcasts about the digital currency.

Bitcoin.com has been releasing new features regularly in order to become a competitive portal in the industry. The website which Roger Ver maintains has a newly created forum for Bitcoin enthusiasts. Ver, when asked by CoinGecko informs us the following:

“Forum.bitcoin.com has been growing very well. We now have thousands of unique visitors each day,  with an ever growing base of interesting users. The AMA is certainly the best one in the history of Bitcoin. I’m confident that in time Bitcoin.com will grow to become a hub of social interaction in the bitcoin sphere.”
— Roger Ver, Bitcoin’s First Angel Investor

/r/btc is another subreddit focused on the subject of bitcoin and its related environment. The forum has seen an increase of subscriber migration from the original r/bitcoin. Currently, there is a lot of movement here since the censorship has increased.

Last week, Brian Armstrong had a lot to say about the block size debate and felt that he was being censored. This led to many posts on /r/bitcoin discussing about Coinbase’s potential ban from the subreddit. Theymos even threatened to ban Coinbase should Coinbase start actively promoting XT to customers on their website.

Roger Ver, who has stepped up to help moderate /r/btc stated that the /r/btc subscribers list has more than doubled in size over the last 48 hours. The site currently has a population of over 5,000 followers and also claims to deter post suppression.

Zapchain has a Bitcoin discussion board that allows users to post questions and answers and earn some bitcoin at the same time. The website incentivizes users through the use of micro-tipping using the Coinbase API. It organizes discussions in a daily manner similar to Product Hunt. Founded by Matt Schlicht, it recently raised $350,000 from Tim Draper, Adam Draper and the Boost Bitcoin Fund and these VCs surely see a potential to build a micro-transaction enabled Bitcoin discussion forum.

With Theymos and others who moderate these venues publicly stating that if there is disagreement with their leadership then they should outright compete with them. Roger Ver, who spoke with us regarding the growth at /r/btc and his new forum believes that restrictions of content and dialogue never adds value to problems. Ver told us:

“Suppressing dissenting opinions is not the proper way to find solutions to problems.  The best way is to allow free and rigorous debate.”
— Roger Ver, Bitcoin’s First Angel Investor 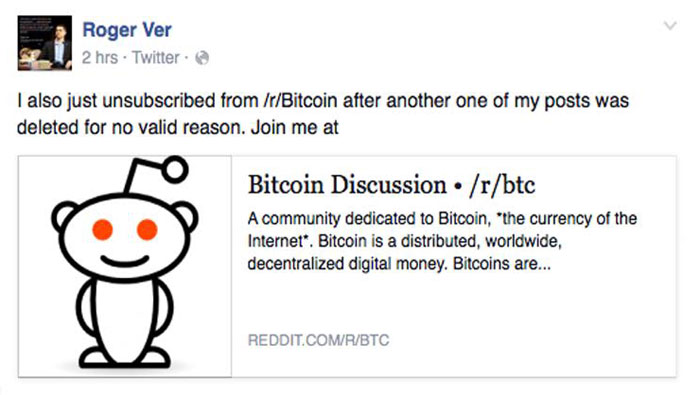 Many community members have voiced their opinions about moving to other locations. Core developers like Gavin Andresen have left the /r/bitcoin space during the block size debate. At Andresen’s recent AMA appearance, a user asked him “Do you think that the actions and statements of Theymos/Blockstream were highly damaging for the community?” in which the chief scientist replied:

It’s clear that many are unhappy with restrictions in conversation and this has led to the bifurcation of online meeting places to discuss Bitcoin. Maybe this shift was needed to have the conversations take place on a more decentralized manner. However, the fact remains that with over 175 thousand subscribers, /r/bitcoin will not be going anywhere fast and many have to simply agree with the ‘put up or shut up and compete’ mentality.

Many of the protesters are also coincidently protesting on /r/bitcoin itself which to many people represents a contradiction. It will take a massive exodus for any of the above 6 listed forums to compete with /r/bitcoin. Despite this huge task community members are continuing to rally behind this movement as more and more new posts are seen weekly regarding this subject.

Jamie Redman is a Bitcoin enthusiast, trader, journalist and graphic artist. For over 4 years Redman has been deeply infused in the cryptocurrency space. Creating a ton of Bitcoin visuals and articles for the community to enjoy, Redman continues his quest to be a candid evangelist of the virtual currency. Follow the author on Twitter @jamiecrypto