What was the highest price for Bitcoin?

What was the lowest price for Bitcoin?

What was the 24 hour trading volume of Bitcoin?

Where can Bitcoin be traded?

You can trade Bitcoin on Binance, Currency.com, and Binance. Popular trading pairs for Bitcoin in the market includes BTC/USD, BTC/CAD, BTC/EUR, BTC/PHP, BTC/INR, and BTC/IDR. 
How to keep your Bitcoin safe?


That being said, Bitcoin comes with risks. In order to determine for yourself if it is a good investment, it is important to understand the risk and only invest amount that you are comfortable losing. 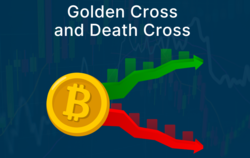 What Are The Golden Cross And Death Cross?

Learn about what golden cross and death cross technical indicators signal and how you can apply them to your analysis!

We have met the technical definition of a recession and yet, the market bounces more? Read on to understand the noise behind the 'macro FUD'.