What was the highest price for Empty Set Dollar?

What was the lowest price for Empty Set Dollar?

What was the 24 hour trading volume of Empty Set Dollar?

Where can Empty Set Dollar be traded?

What is Empty Set Dollar?

Empty Set Dollar (ESD) is a decentralised stablecoin that uses an algorithmic approach to maintain price stability around $1 target by relying on a seigniorage model.

ESD has some unique features:


How does ESD work?

ESD’s price mechanism uses a seigniorage model. This means, if the market demands more ESD i.e. when ESD goes above $1, more ESD coins will be minted to meet that demand and bring the price back down to $1. That extra minted money supply is then distributed to the coupon holders first before the ESD holders that chose to lock their ESD.

If market demand is lagging behind supply, ESD may fall below $1. So a supply contraction is needed to spur price. During this contractionary phase, a coupon redemption system comes into play, where users may purchase these coupons with ESD coins in exchange for a premium (i.e. receive more ESD coins) only when the ESD price goes back to $1. Basically, users agree to burn their ESD in exchange for coupons redeemable later on - reducing ESD’s supply until price goes back up to $1. However, coupons have to be redeemed within 90 epochs (30 days), which carries significant risk if the price of ESD does not go back to $1 as coupons will be rendered obsolete after 90 epochs without redemption.

This protocol relies on a ‘voluntary system’ that is very much depended on by its incentive mechanism. This poses a risk to the currency in the event that users decide to ignore the coupon incentives and no longer participate in the system, the protocol’s ability to maintain its peg at $1 will be directly hampered.

Note that the price of ESD as of January 2021 is $0.285, which is more than 70% down from its supposed peg. This may indicate that the coupon and incentive mechanisms ESD is based on may be waning in effect.

Why was this project started?

ESD was created to solve core issues that its predecessors faced. Collateral-based stablecoins are both capital inefficient and carry risks of the underlying collateralized assets, which goes against the whole idea of ‘decentralisation’. These stablecoins also face a restricted supply, as the total of supplies are constrained to strictly less than the available reserve assets on-chain. ESD’s construction that is based on many iterations offers an elastic-supply stablecoin not bound by these limitations.

How does ESD differ from other Stablecoins?

ESD’s protocol was designed by taking elements from numerous pre-existing protocols to produce a balanced protocol that aims to curtail the core issues of other protocol designs.

ESD directly addresses the centralisation risks of USDC, USDT, TUSD and attempts to avoid the ‘death spirals’ faced by rebase tokens such as AMPL and BASED. When negative rebase happens to a rebase token due to their price being lower than $1, the amount of rebase tokens owned will also decrease, inducing panic among users. This will further compound the selloff, initiating a vicious spiral downwards. 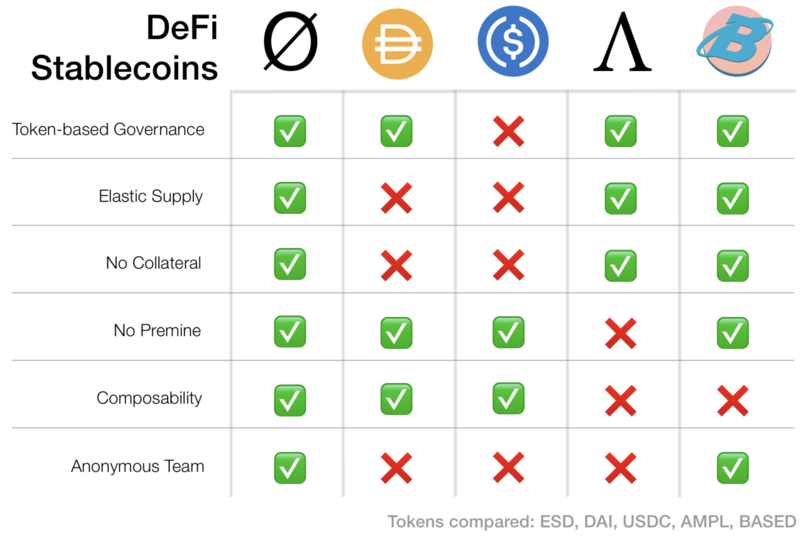 It also should be noted that ESD has a fork named Dynamic Set Dollar. They are different in a few ways, such as in epoch duration and their coupon expiry.

How do I get ESD?

ESD can be purchased on exchanges such as Uniswap or Sushiswap.

You can browse through the various centralized and decentralized exchanges by heading over to our exchanges page here.