Synthetix Network price today is $2.37 with a 24-hour trading volume of $113,338,868. SNX price is down -8.5% in the last 24 hours. It has a circulating supply of 230 Million SNX coins and a total supply of 278 Million. If you are looking to buy or sell Synthetix Network, HitBTC is currently the most active exchange.

What was the highest price for Synthetix Network?

What was the lowest price for Synthetix Network?

What was the 24 hour trading volume of Synthetix Network?

Where can Synthetix Network be traded?

Synthetix is a decentralized synthetic asset issuance protocol founded by Kain Warwick and the Synthetix Foundation. Initially, it was known as Havven when it first launched in September 2017. During its seed round and token sale, it managed to raise $30 million by selling 60 million HAV tokens to investors. In late 2018, the platform expanded its vision and rebranded to Synthetix. Today, the platform is the largest decentralized exchange for derivatives in the decentralized finance (DeFi) space, boasting an impressive ~$700M in total value locked (TVL) as of November 2020.

What are synthetic assets?

Synthetic assets or Synths are derivatives that provide exposure to real world assets on the Ethereum blockchain. Similar to derivatives in traditional financial markets, Synths allow users to hedge and reduce their risk, speculate on price movements and gain access to unavailable assets or markets. This is all accomplished without an individual ever holding the underlying asset.

What can the SNX token do? 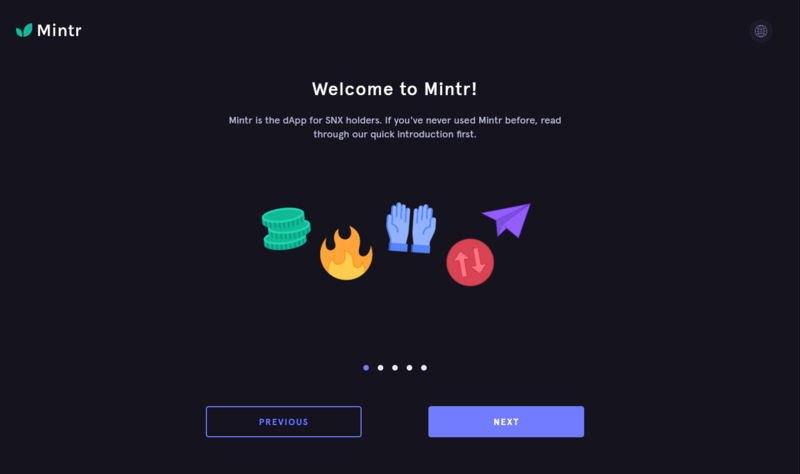 Synthetix Network Token (SNX) is primarily used as collateral to mint synthetic assets. SNX holders can head over to Mintr to stake their SNX into the Synthetix smart contract and create sUSD – synthetic United States dollars. The amount of sUSD minted will depend on two factors: i) the amount of SNX staked, and ii) the collateralization ratio (C-Ratio) of the platform. At present, the C-Ratio is 600%. This means that in order to mint 1 sUSD, a user would need to stake at least 6 SNX as collateral.

SNX is also used to earn rewards. SNX holders who stake their SNX into the platform are incentivized to do so through two main reward mechanisms: i) exchange rewards and ii) staking rewards. Exchange rewards are generated whenever a trade takes place on Synthetix, the value of which can range from 0.1-1% of the trade value, though it is typically 0.3%. Staking rewards meanwhile, are rewards from the protocol’s inflationary monetary supply. The new SNX generated by the protocol is given to SNX holders who stake their tokens. Both these rewards are distributed as SNX on a weekly, pro-rata basis and are escrowed for 1 year.  This is subject however, to an individual’s compliance with the target C-Ratio.

Synthetix also offers other time-limited incentives such as liquidity provider rewards. These can be viewed on Mintr by clicking the LP Rewards tab.

How do I obtain Synthetix Network Tokens (SNX)?

Synthetix Network Tokens (SNX) can be obtained by buying them from an exchange such as Binance or Uniswap. You can find SNX trading on various centralized and decentralized cryptocurrency exchanges via the link provided.

What kind of Synthetic Assets/Synths are there?

Synthetix Exchange lists all its supported synthetic assets under its Synths tab. For a broad categorization of the different Synth types, as well as further explanation of their inner workings, you can check out Synthetix’s litepaper. Broadly, there are 5 types of synthetic assets:


How does Synthetix work?

The process of staking and minting synthetic assets is similar in principle to how an individual would obtain an over the counter (OTC) derivative. OTC derivatives are derivatives that are bought through broker-dealer networks, rather than on stock exchanges. This means that they are inherently riskier, bearing significant counterparty risk. Thus, to mitigate this, each party is often required to put up collateral in a transaction.

In Synthetix, the act of obtaining a derivative is similar. A user first needs to lock-in or stake their collateral, SNX, into the smart contract before it issues the synthetic asset in return. However, there are a few key differences.

Firstly, Synthetix operates on a peer-to-contract model, rather than a peer-to-peer model used in traditional OTC derivatives markets. This means that Synths are traded for one another through a smart contract, rather than with a corresponding party or individual. When a trade is executed on Synthetix, the smart contract takes and burns the given Synth and mints an amount of corresponding Synth, determined by exchange rates from Chainlink’s decentralized price feeds.

Secondly, users who lock-in their collateral incur debt. Initially, the value of the debt will depend on the amount of Synths the user has minted. However, this value is non-static and will fluctuate. This is because the debt represents a portion of total network debt, whose value increases or decreases depending on the exchange rate and supply of Synths in the protocol.

In the event that this occurs, the user’s C-Ratio may fall below the stipulated target level of 600%. The individual would then need to either i) burn some minted Synths or ii) obtain more SNX and stake it into the protocol to mint more Synths, to bring his/her ratio back up. No rewards will be given until then. More information on debt can be found in Synthetix’s litepaper.

Finally, Synthetix generates rewards for users. As mentioned before, Synthetix offers exchange and staking rewards to users, which incentivize participation and compliance with the protocol. This is unlike traditional derivatives markets, which do not have this rewards feature.

The Synthetix Foundation has been responsible for the governance of the protocol since its inception in 2017. It does this through two proposal mechanisms: i) Synthetix Improvement Proposals (SIPs) and ii) Synthetix Configuration Change Proposals (SCCPs). The former deals with proposed changes to Synthetix’s smart contract while the latter is concerned with proposed changes to values such as the C-Ratio and exchange fees. The various SIPs and SCCPs can be viewed freely at their respective links.

However, in line with moving towards greater decentralization, the Synthetix Foundation was decommissioned on 28th July 2020. In its place, three decentralized autonomous organizations (DAOs) were formed: i) ProtocolDAO, ii) GrantsDAO and iii) SynthetixDAO. More information on the roles and responsibilities of these DAOs can be found in Kain Warwick’s blogpost here.