A Brief History of HODL

Every new innovation brings its own lingo. New words mark important developments in the field and also add color and a certain backstory.

Crypto is no different. Dozens of crypto terms have entered the English language over the past few years, most notably HODL. But even by the standards of internet message boards, the origin story of crypto's best-known slang word is a good one. It involves late-night posts, investment drama, self-acknowledged weaknesses, and of course alcohol.

Let's jump into the history of HODL, and touch on some other notable crypto slang along the way.

It began with Bitcoin

Like all good crypto stories, HODL’s history starts with Bitcoin. 2013 was Bitcoin's breakout year; the cryptocurrency began the year at $13, but passed the $900 mark in early December. 90x isn't too bad by anyone's standards; investors made millions.

Given the sad state of affairs on the 18th, online message boards were full of bitcoin enthusiasts sharing their tales of woe. Over on bitcointalk.org, one user, GameKyuubi, decided to make a public announcement.

"I AM HODLING" he declared.

The post underneath was more than a little rambling. But there was a kernel of sense in the middle:

"I'm a bad trader and I KNOW I'M A BAD TRADER," GameKyuubi acknowledged.

Without the keen sense of when to trade, and still stuck in an apparent bitcoin free-fall, GameKyuubi did the only thing he knew to do:

"You only sell in a bear market if you are a good day trader or an illusioned noob.  The people inbetween hold."

No more indecision for GameKyuubi; no more waffling about, unsure of when to trade. He was going to hold onto his bitcoin and ride out the storm.

But what about that notable misspelling? "Buy-and-hold" is an accepted trading strategy on the traditional markets. "HODL" - essentially the same idea - is unique to crypto. Why the unusual word?

GameKyuubi's post was more than a dry announcement that he was going to hang on to his tokens for a bit. From the opening sentence - which included the classic line, "GF's out at a lesbian bar" - his announcement showed all the hallmarks of a drunken rant. You don’t write the phrase “pit paffy wing wong wang sure no problem bro” without a certain lowering of the inhibitions. GameKyuubi confirmed it before he signed off, acknowledging that he'd "had some whisky" and that he'd "type d (sic) that tyitle twice because I knew it was wrong the first time."

The title was still wrong, of course.

Wrong title, drunken post, market downturn - it all came together to create an instant classic. The result was the birth of the founding father of crypto slang. HODL - buy and hold, sometimes also Hold On for Dear Life - leaped into the crypto canon. Part of the term’s appeal was that GameKyuubi wasn't wrong. If he wasn't confident enough to navigate leverages and options and to execute advanced trading strategies, then he was best served by HODLing.

What GameKyuubi started, others continued. With NFTs taking the world by storm in 2021, a whole wave of related terms entered crypto parlance. Here's some of the top hits:

WAGMI - We Are Gonna Make It, or sometimes We're All Gonna Make It. WAGMI reflects a positive outlook on crypto and NFTs in general. Most often used in the context of good news - like when the whitelist for your latest drop filled up in seconds. It might also be used as a reassurance, for when the floor price for your collection is so far below mint that you're scared to look. Of course, the latter would also be a prime time to morosely whine about NGMI - Not Gonna Make It.

Diamond hands/paper hands - Wanna make it big? Keep HODLing, despite the downturns. Other sectors require nerves of steel, but to be a savvy crypto investor you need diamond hands. The opposite is to panic and sell at the first drop in price. That’s a paper hands play, and when the market rebounds, you’ll be out of luck. GameKyuubi would not approve of paper hands.

Fren(s) - The real benefit in the crypto community is the frens we make along the way. They're the ones who spread the word about your whitelist, share tips on the next token to 100x, and are there with a bit of assurance when BTC pushes everything down (again).

PFP NFT - Non-Fungible Tokens (NFTs) hold nearly limitless potential and dozens of real-world use cases. One simple use case is the social media profile picture, where ownership of the NFT makes your own profile picture NFT (PFP NFT) truly unique. It's an avatar that's uniquely yours, backed by the blockchain.

BUIDL - An intentional play on HODL. BUIDL emerges as more and more crypto projects, from NFTs to DAOs, are interested in developing long-term communities. Like HODL, BUIDL is all about a long-term approach.

To the moon - The always-hoped-for day when the altcoin you promoted or the NFT collection you went ape for (bought into early) becomes the next big thing. Let it go 100x in a year, and take you to the moon!

GM/GN - We’re all frens in the crypto world, and goodmorning/goodnight are standard greetings. Some of the more polite Discord communities will have entire channels dedicated just to GM/GN. Who said the Internet wasn’t polite?

Chances are that by the time you read this, new words will have entered the crypto vocabulary. It’s unlikely that any will ever match HODL for common use, and probably none will ever have quite the story behind it.

In between chasing kids and perfecting the perfect dad bod, Aaron writes educational content on crypto and the blockchain. He enjoys researching, writing, and learning about the newest developments in the word of crypto and Web3. 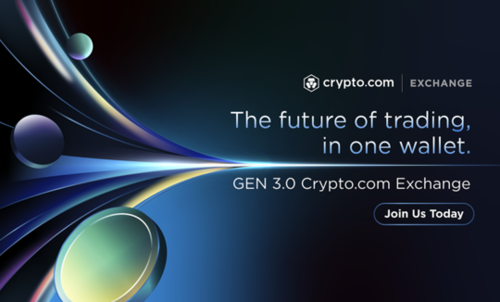 Why is Crypto.com one of the most used Crypto Exchanges?

Because they are secure and transparent BUIDLers.