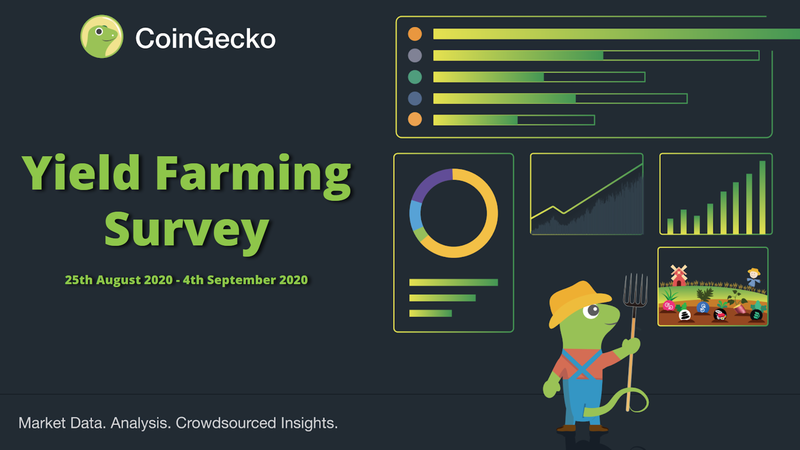 The cryptospace has been evolving at an incredible speed, and one of the new growth cycles in the past 90 days is Yield Farming.

Yield farming really took off after Compound kick-started its COMP yield farming incentives for both lenders and borrowers on the Compound platform. Shortly after the launch of Compound’s yield farming programme, many other DeFi protocols also incorporated yield farming strategies such as Balancer (BAL), Yearn.Finance (YFI), Curve.Finance (CRV) and SushiSwap (SUSHI) to name a few.

According to our data, the total market cap of yield farming tokens stands at $3.5 billion with YFI taking 25% of this share as of 21st September 2020. According to DeFiPulse, DeFi as a whole had a Total Value Locked of over $9 billion, which is a 300% increase since July 2020.

However, yield farming isn’t as easy as it seems. Only sophisticated DeFi natives would know how to do it profitably as this agriculture game requires close monitoring and constant changes in strategies. We at CoinGecko wanted to gain some insights into the following three things in yield farming:

Key Finding #1 -  23% of the respondents have participated in yield farming in the past 60 days, illustrating that yield farming is still a niche but growing trend. 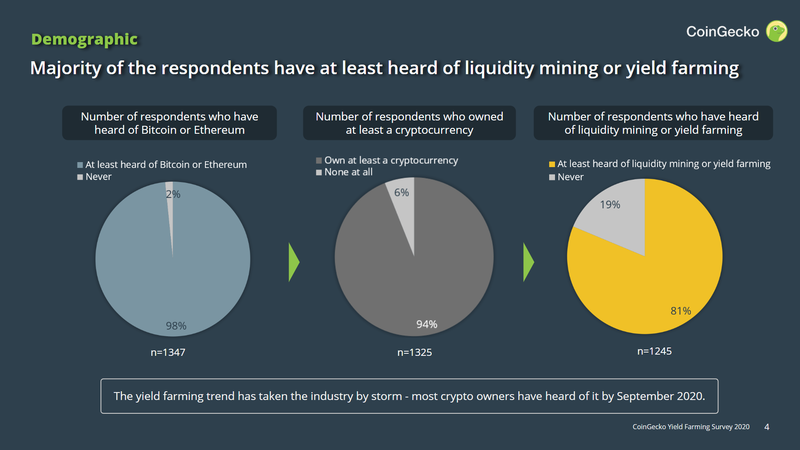 In our survey, we found that yield farmers are still a small subset (312 out of 1,012) of cryptocurrency users who have heard of yield farming. It is dominated by males aged between 30 - 59 years old. 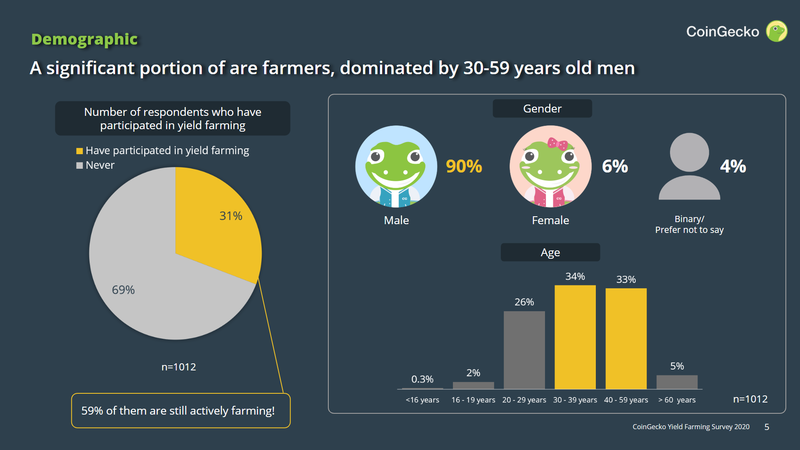 These results are expected as the crypto space is known to be male-dominated. Moreover, one needs a certain level of crypto experience to participate in yield farming.

However, given that the yield farming frenzy began approximately three months ago, the number of farmers is substantial but remains a niche amongst sophisticated DeFi natives.

Key takeaway: Yield farming is a niche game for those familiar and comfortable with financial ratios and have been in the crypto space for quite some time. They are familiar with existing and new DeFi protocols to form effective farming strategies.

Key Finding #2 -  Each yield-farming token made up less than 10% of the farmers’ holdings. 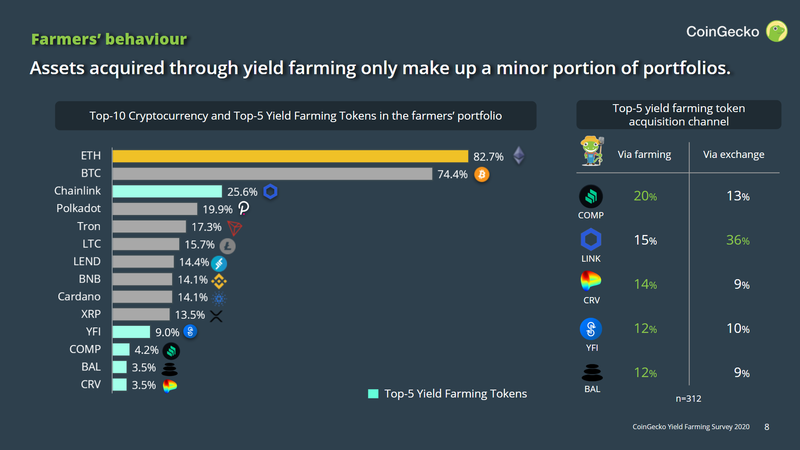 To understand yield farmers’ portfolio diversification, we dug deeper into the coins they are currently holding. Farmers are generally seasoned crypto natives, holding a significant portion of Ethereum (ETH) (83%) & Bitcoin (BTC) (74%) in their portfolio, along with a mix of various DeFi-centric tokens.

Notably, yield farming tokens acquired via yield-farming made up less than 10% of the total farmers’ holdings. However, Chainlink (LINK) which was only farmable through Yearn’s Vaults is mainly bought at exchanges rather than being farmed - it simply had much lower APY relative to some of the other farms out there.

Key takeaway: The small portion of yield farming tokens in their portfolio may suggest that the tokens are currently being locked in the smart contract pools of the respective protocols they are farming. On the other hand, we see behavior where farmers would ‘farm and dump’ after accumulating substantial reward tokens in the pool, indicating that yield farming tokens are not to be held long-term. 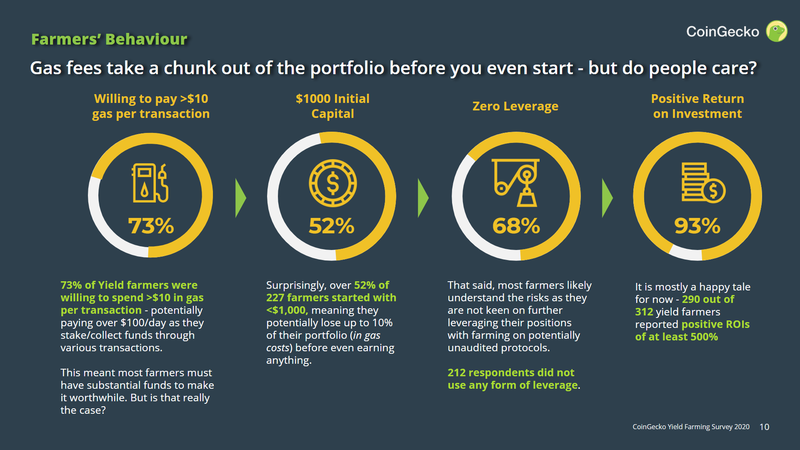 In an attempt to understand how farmers behave when yield farming, we asked them the following questions:

We discovered that more than half of the farmers invested capital of above $1,000 into farming pools, and the majority did not employ leverage in their strategy. It remains unclear whether it is because these farmers did not want to take on additional risks as many of the farming pools are unaudited or have yet to learn how to do so.

However, those who farmed with less than $1,000 may not have reaped as much profit due to high gas fees associated with the constant movement between pools and protocols when farming yields, excluding other associated risks such as impermanent loss.

Regardless, these farmers claimed that their return on investment (ROI) was up to 500%. The result is not a surprise find as many of the current new pools provide insanely high APY of over 1,000%. Our opinion is that these high yields offered are not sustainable as it comes with high risk, and the spike in gas fees will be a barrier to entry and exit for farmers.

Key takeaway: The high gas fees may impede the smaller farmers, and their ROI may not be as high as the ones that invested above $1,000.

Key Finding #4 -  A large portion of the farmers do not know how to read smart contracts despite claiming that they understand the risks associated. 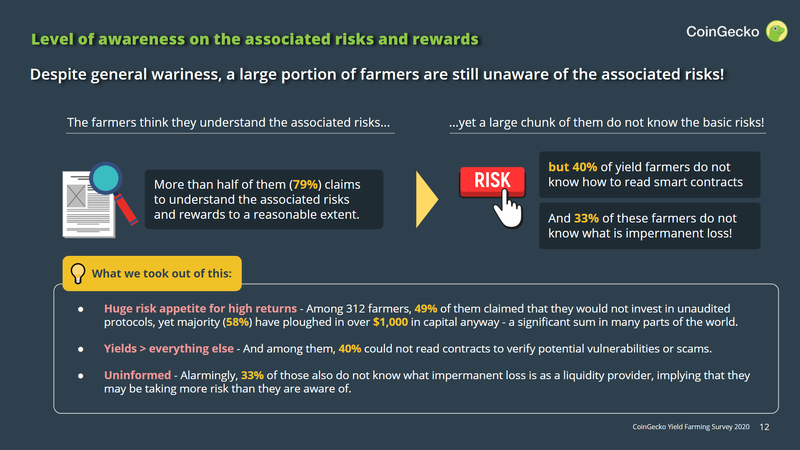 What is shocking to us (or maybe not) is that a large chunk of the farmers do not know how to read smart contracts (40%) and do not even know what impermanent loss is (33%), which implies that they don’t know their real ROI and are extreme risk-takers for the sake of the high returns.

Perhaps that is why 49% of the farmers are generally wary of unaudited smart contracts and rely on smart contract auditors to check the safety of the contract. However, time and time again audit firms themselves have mentioned that audits do not guarantee that contracts are safe and one should still take preventive measures where possible.

Key takeaway: All farmers should conduct their research before farming in any pools, as there are more copy-paste yield farming tokens that could potentially expose them to a greater risk such as code vulnerability or scams.

Below is the summary of the four key takeaways from our survey:

Key takeaway #1: Yield farming is a niche game for those who are at least familiar and comfortable with financial ratios and have been in the space for quite some time as they are familiar with the existing and new protocols to strategize their leverage.

Key takeaway #2: The small portion of yield farming tokens in their portfolio may suggest that the tokens are currently being locked in the smart contract pools of the respective protocols they are farming. On the other hand, we are seeing a behavior where farmers would ‘farm and dump’ after accumulating a substantial amount of reward tokens in the pool, which indicates that yield farming tokens are not being held long-term.

Key takeaway #3:  The high gas fee may impede the smaller farmers, and their ROI may not be as high as the ones that invested above $1,000. It may hurt their capital if they get impacted with the impermanent loss.

Key takeaway #4: All farmers should conduct their research before farming in any pools, as there are more copy-paste yield farming tokens that could potentially expose them to a greater risk such as code vulnerability or scams.

Back to our objectives when conducting the survey:

Our opinion is that the high yield pools are not sustainable, but yield farming products are here to stay. It is now apparent that the yield farming pools introduced by Uniswap recently on 17th September has solidified the yield farming frenzy. Indeed, it is no longer merely a frenzy but has now matured significantly.

However, until the high gas fee is solved, it is unlikely that retail users can enter farming without hurting their capital, and this is not taking into account other associated risks such as impermanent loss.

We also urge users to learn how to read up on smart contracts and familiarise themselves with the associated risks and rewards before entering any pools. As much as we want to be a Degen* and take advantage of the high yield, the downside risks are even more prominent with many projects coming in with little effort to conduct undifferentiated product development in this cycle.

*Degen is a short form for “degenerate”, commonly used in the crypto to indicate traders who take huge risk in anticipation of huge rewards.

We would like to express our gratitude to all our survey participants who have allowed us to gain a better understanding of the behavior of yield farmers in this new cycle. For those who are interested in our methodology of this study, you can read it here.

What is Vesting in Crypto? Understanding Crypto Vesting Schedules

Vesting is the process of locking up a designated percentage of a token's supply for a specified period of time or until conditions are met. 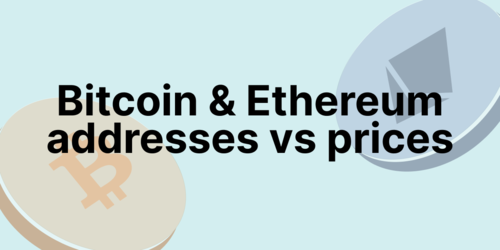 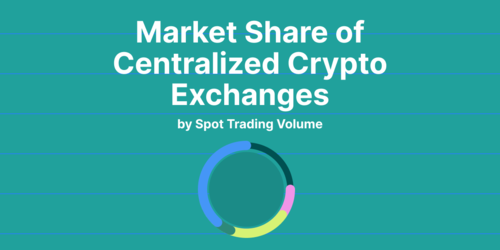 Binance dominated the centralized crypto exchange market with a 62% market share, even as spot trading volumes declined, in 2022.