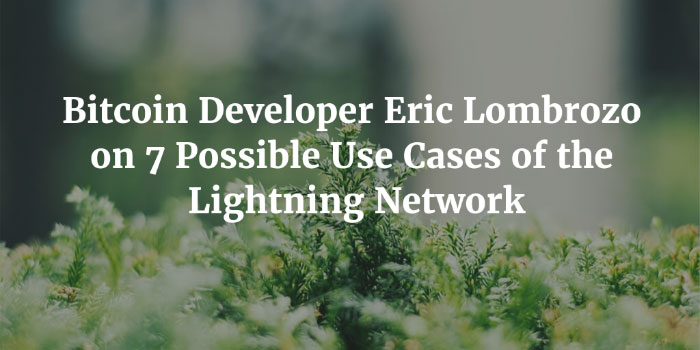 The Lightning Network has been one of the hottest new developments in Bitcoin over the past year, and many users are excited to see what new possibilities will take shape once the platform is finally deployed. An exact timeframe for the Lightning Network’s availability is not yet available, but that didn’t stop Bitcoin Core Contributor and Ciphrex CEO Eric Lombrozo from sharing his excitement for this solution for low-trust, off-chain transactions during his recent presentation at Blockchain Agenda San Diego.

While talking about the merits of the Lightning Network and other off-chain solutions, Lombrozo shared seven possible use cases of the new platform with the audience at the San Diego Convention Center.

The first use case for the Lightning Network mentioned by Lombrozo is perhaps the most obvious. When people think micropayments, they immediately think about the ability to make small payments to view articles, watch videos, or digest some other form of online content. Lombrozo noted:

“When you have micropayments available like this, you can really make it very, very easy for users to get past paywalls and pay a small amount to be able to view content.”

Not only does the Lightning Network make these sorts of small payments for content possible, it also could be made completely seamless through the use of browser-based bitcoin wallets.

One company that is excited about this potential use case of Bitcoin is 21, the company behind the world’s first Bitcoin computer. The idea is to make every device on the planet compatible with Bitcoin by default, which would remove many of the complexities and barriers to entry currently involved with using bitcoin online. The miner in a potential “Bitcoin chip” would provide a steady flow of bitcoin that would allow users to pay for content with an increased power bill rather than advertisements or their private data.

Lombrozo also talked about the online advertising industry in general when talking about the benefits of the Lightning Network. He noted:

“Advertisers could get paid this way. Also, it could give users more of a choice of whether they want ads shown to them. They could even get paid for watching ads, or if they want, to bypass the ads they could choose to use micropayments.”

Publishers could potentially get paid instantly for pageviews on their websites when micropayments are a viable option and money is allowed to move around the Internet in a frictionless manner. The point here is that replacing legacy payment options with Bitcoin-powered microtransactions creates more possibilities in how the online advertising industry works at a core level. 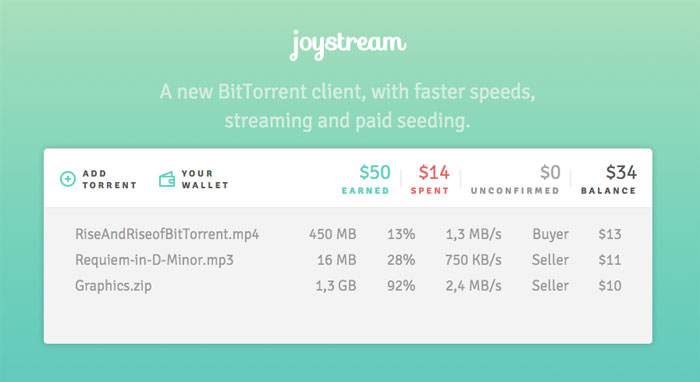 Content seeding was another use case mentioned by Lombrozo. In particular, it could make sense for some users to get paid for seeding particular torrents. One torrent client, Joystream, is already working on this, and they currently use basic payment channels instead of a more generalized network for micropayments such as the Lightning Network.

Although popular content usually has no problem finding seeders, torrents of less popular content tend to be hard to find or nonexistent. By adding a financial incentive to the mix, torrent leechers could have access to everything rather than simply what everyone else is consuming.

App stores were another use case of the Lightning Network mentioned by Lombrozo during his talk. Apps are, usually, low-priced digital goods, which is an area of commerce that has always been touted as an opportunity for bitcoin options. It would be interesting to see the development of a Bitcoin-powered app store that offered lower-priced apps for Android users due to the use of the Lightning Network for micropayments.

Lombrozo also briefly mentioned game credits and game tokens during his talk. Many developers have shown interest in incorporating bitcoin into their games over the years, and BitQuest was one of the first examples of this concept put into action.

Some game developers have gone the route of creating their own, new cryptocurrencies, such as Neucoin, while others have found it makes more sense to plug into something like Snapcard’s API.

One of the key areas of potential for Bitcoin and the Lightning Network in the gaming industry is the ability to transfer tokens or credits between games. Having said that, this would still require game developers to enable the transfer of these tokens between players. 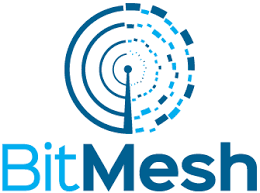 P2P bandwidth and hosting sales also make more sense with Bitcoin and the Lightning Network. At least one company, BitMesh, is already working on the ability to allow users to sell access to their Internet connections via hotspots created on their smartphones or other devices. With micropayments, users can connect to the Internet via a local mesh network and pay per megabit rather than signing up for a monthly subscription via an ISP. In the early days, this sort of technology could be most useful in public places, such as airports or bars, that don’t offer free WiFi access. Someone with a data connection through their mobile provider would be able to sell access to that connection via Bitcoin-powered micropayments.

A final possible use case for the Lightning Network that may come as a surprise to some is decentralized exchanges of digital assets. During his talk, Eric Lombrozo noted:

“[With the Lightning Network], you could have peer-to-peer order books and atomic, cross-chain swaps.”

The idea of using something like the Lightning Network to create a decentralized exchange has also been discussed by Amiko Pay Developer C.J. Plooy. According to Plooy, Lightning Network channels have the ability to route payments between different blockchains. This means transfers and atomic exchanges between sidechains, which could contain different assets, can take place instantaneously.

Lombrozo ended this portion of his talk by adding:

“You can have a way of doing all this stuff with minimal cost, which makes it really, really effective.”

Bitcoin’s future would be much brighter with a working implementation of the Lightning Network, but the community will have to wait for a few more improvements to Bitcoin Core before this sort of system can be rolled out. Having said that, Elizabeth Stark, who is working with Joseph Poon and Tadge Dryja (the original creators of the Lightning Network), recent claimed a preliminary version of this protocol for off-chain transactions could be available a few weeks after the midpoint of 2016.