In an unprecedented move by one of the FAANG tech giants, Facebook officially revealed their own cryptocurrency called Libra. For the very first time, we are seeing a company of this scale launch and issue its own native blockchain token. This move by Facebook will likely rock the boat of many other tech and financial institutions - mass cryptocurrency adoption looms and it probably will not be long before the other tech giants follow suit with their own blockchain plans.

Libra as a Cryptocurrency

Libra is a cryptocurrency, where transactions are recorded on immutable ledgers secured by various parties in a decentralized manner. Libra will launch H1 2020, and will be fully backed by reserves of low volatility assets (“Libra Reserve”). Libra and Libra Reserve will be governed by the not-for-profit Libra Association, which is comprised of founding members from various industries and countries. 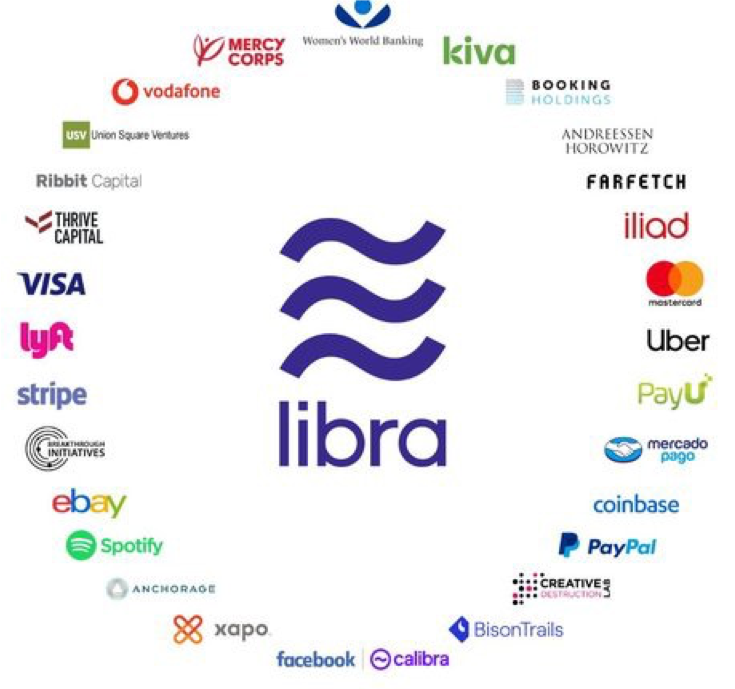 The Libra Association is an independent, non-profit organization located in Geneva, Switzerland. The association consists of founding members coming from various industry sectors and distributed globally such as:

The Libra Association plans to grow its number of members to 100 before its scheduled launch in the first half of 2020.

What is so special about Libra?

The potential impact of Libra in driving cryptocurrency adoption is huge, with Facebook having an existing 2 billion Monthly Active Users (MAU) who will be immediately exposed to Libra. And that is just Facebook alone - if we consider the user bases of all other consortium members, the exposure is likely far greater. This is undeniably a positive affirmation for the blockchain industry as the accessibility to cryptocurrency goes mainstream and begins benefitting the general populace.

In its whitepaper, Libra claims that it will be a stable digital cryptocurrency that is fully backed by a pool of assets which includes a collection of low-volatility assets (“Libra Reserve”), such as bank deposits and short-term government securities from stable and reputable central banks to build trust in the intrinsic value of Libra. Despite it’s backing, Libra is not a stablecoin where it’s value is pegged to a single fiat currency, but rather sort of an index fund of various currencies it has in its reserves.

The concept of a currency stabilizing its value by pooling assets and reserves is not a new one. This has been done by almost every federal reserve or monetary funds in a bid to stabilize their own fiat currencies. Similarly, applying such techniques to Libra will allow it to have a relatively stable value.

Libra, and the Libra Blockchain

Technically speaking, Libra closely resembles many of the permissioned blockchains where only entities that fulfill certain requirements and at the start, all participants are the founding members of the Libra Association. They will participate in it’s consensus to vote on the parameters and protocols of the Libra blockchain.

In 5 years time, Libra aims to become less permissioned by having 20% of the voting power come from all node operators in a Proof-of-Stake manner, rather than 100% from its founding members.

Consensus wise, it follows the Byzantine Fault Tolerance (BFT) consensus approach where two-thirds majority will be required for the execution of transactions.

What is next for Libra and the financial sector?

As announced, Libra is working towards its launch in first half of 2020. Facebook has also established Calibra to build and operate services on its behalf on top of Libra Network. Calibra is expected to introduce its first product, the Calibra wallet in 2020 to support the storage, sending and payment using Libra in Facebook Messenger and Whatsapp.

Facebook’s move into the blockchain sector with Libra is just the beginning. The potential for the blockchain technology to disrupt traditional financial services is slowly being realized and we should expect other tech giants to follow suit in the process.

With over 2.5 billion people unbanked and many still relying on illiquid/inefficient local currencies, Libra’s mission to empower billions with a simple global currency through technology echoes with that of eToro’s GoodDollar. The difference is that GoodDollar distributes money using the principle of universal income (UBI) and is 100% not for profit.

Moving forward, eToro will continue to play a key role in this financial revolution as it open up access to money to everyone around the world. eToro will be looking forward to having Libra listed on eToroX, eToro’s cryptocurrency exchange and eToro.com, the trading and investment platform with over 11 million registered users across 140 countries.

About Sim Teong Jing — TJ is a freelance writer that's enthusiastic for numbers, graphs and the economy. He is also a constant learner and are fast to analyse the latest happenings. Follow the author on Twitter @TjTeong