An Easy Guide to Switcheo - the First Decentralized Exchange for NEO

In this guide, we will be taking a look at what Switcheo is and how to use it. We will also be talking about the Switcheo token and where the exchange sees itself going moving forward.

A Brief History of Switcheo

The Singaporean team behind Switcheo first called attention to their project by winning a dApp competition hosted by City of Zion, the global open-source community for NEO, in December 2017. This was followed by a whitepaper in February 2018 and an ICO that ended on March 17, 2018.

The ICO was small but successful, hitting its cap of USD8.7 million within 24 hours. The first version of Switcheo went live days later. The Switcheo platform is currently in its second version (released on July 25, 2018).

Despite having the first-mover advantage, Switcheo’s goals extend far beyond the NEO space. It plans to integrate QRC20 tokens, which are tokens built on the Qtum platform, another fast-growing Ethereum challenger. ERC20 token integration will also follow next, targeted to be completed by the end of Q3 2018.

Switcheo also intends to integrate fiat payments (credit cards and bank deposits) and cross swaps with an end goal of integrating with its own specialized blockchain which can better support cross-chain trading.

For security and usability reasons, you need to login directly using your NEO/NEP5 wallet similar to how other Ethereum decentralized exchanges require you to use MetaMask.

Which NEO/NEP5 wallet to use? If you don’t have one already, a few popular choices are:

Also, if you have a Ledger Nano S, you can just login directly to Switcheo using your Ledger.

Logging in to Switcheo

Once you have your NEP5 wallet ready, logging in to Switcheo is a breeze. Simply go to the exchange webpage, and click the login button at the top right hand corner. Switcheo recommends using the incognito mode on Google Chrome for the best performance.

The following popup will show; you can also see the option to use your Ledger for a direct login. In my case, I logged in using my private key – and that’s all there is to it. 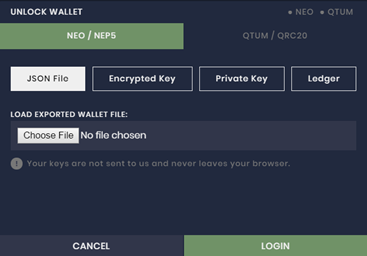 Do note that while I willingly shared my private key (essentially my NEO wallet’s password) with Switcheo, some of the more security-conscious among you might not feel too comfortable doing this, particularly if the wallet has a large amount stored. If so, you can opt to export the wallet file wholesale instead, though it’s obviously more inconvenient. Here’s a guide on doing it using NEON Wallet.

Now, you can take a look at the Switcheo interface, which is very easy to navigate. The main user interface is divided into six major components: order entry, balances, order book, price chart, trade history, and your transactions. Beginners should have no problem navigating through Switcheo.

Since I’m logged in, you can see my NEO wallet balance automatically displayed (bottom left of the screen). 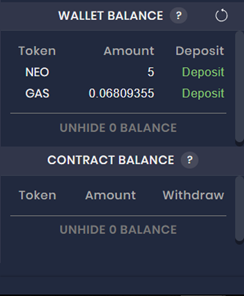 Before we go further, let’s take a look at one component that all traders consider when choosing an exchange of any kind, and that is the fee structure. Fortunately, just like its user interface, Switcheo’s fee structure is refreshingly simple.

Switcheo operates on a market maker-taker model, with a 0.15% fee on the market takers. This 0.15% fee can also be halved to 0.075% if market takers opt to pay the transaction fee in SWTH, Switcheo’s native token.

As for withdrawal fees, the bane of many traders’ existence, Switcheo has none. If you’ve used even a few crypto exchanges before, you know that this is a huge plus. 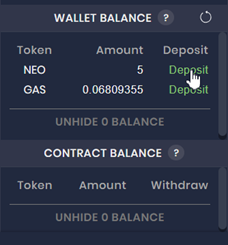 IMPORTANT NOTE BEFORE DEPOSITING: Understand that unlike many other cryptocurrencies, NEO does not have decimal places; it is always in whole numbers (BTC for example, has 8). And while exchanges, including Switcheo, are able to trade fractions of NEO, all withdrawals or deposits of NEO have to be in whole numbers.

What this means is that in the case of amounts with decimal balances being left on the exchange (e.g. 2.420 NEO) you will only be able to withdraw whole numbers. So in the previous example you would only be able to withdraw 2 NEO and the remaining 0.420 NEO will be left on the exchange’s smart contract. This is particularly problematic for exchanges that charge withdrawal fees (which Switcheo thankfully does not).

One workaround is to convert the fractional NEO into another NEP5 token or GAS, then withdraw that token instead. That said, this solution is not perfect because in many cases, a trader would rather just have NEO.

Now, let’s proceed. I am going to deposit 2 NEO into the smart contract. 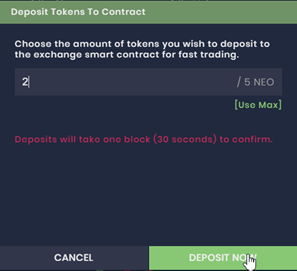 Although it said that it would take 30 seconds for the deposited amount to be transferred to the smart contract (viewable in the Contract Balance section), in my case I had to try multiple times before eventually seeing the deposited amount (which was the next day). I’m not sure whether this was due to the exchange or the NEO blockchain network itself, which does have a history of going down sometimes. 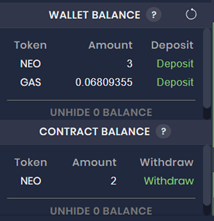 In any case, with the NEO now in my contract balance, it’s time to start trading. Currently, Switcheo offers 26 other NEP5 tokens plus NEO for a total of 87 trading pairs. 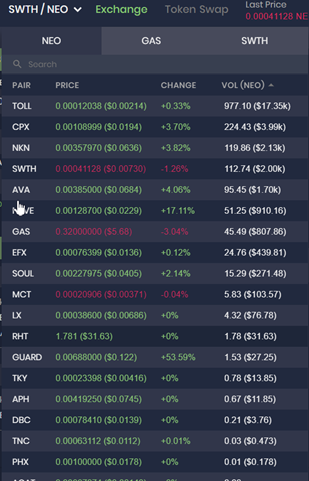 To keep things simple, I’m going to use NEO/GAS. GAS, similar to Ethereum, powers the NEO network. However unlike Ethereum’s gas, NEO's GAS is also a token with its own value. I’m going to purchase 1 GAS. 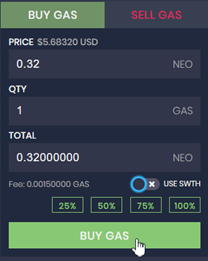 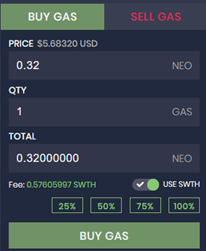 If that option is selected, the fee now shows 0.57605997 SWTH, which is worth 4.2 cents; half of the above. Do note that you must own SWTH in your contract balance first to have the transaction fee halved. And of course, if you were to buy SWTH, the fee would automatically be charged in SWTH and at the lower rate. Again, to keep things simple, I’m just going to pay the fee in GAS.

At the top of the sell order book (or the bottom of the buy order book), you will find people placing absolutely ridiculous prices, such as selling 1 GAS for 1,000 NEO. Do your homework before choosing to fill any orders. I scrolled to the bottom and selected one that was about equivalent to the market price. 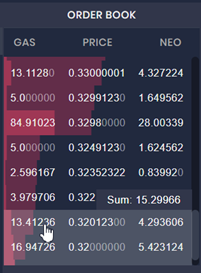 Note that you don’t have to fill the entire order, you can fill a set percentage of the order (25%/50%/75%) or fill in a specific number yourself. In my case I just changed the GAS amount to 1 and the rest of the values automatically updated. My order went through and I now have 0.9985 GAS (1 GAS minus the transaction fee). 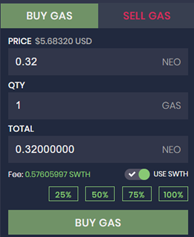 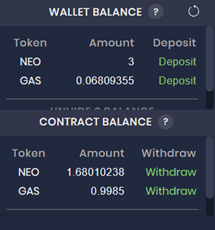 Now let’s create an order directly in the Order Entry section instead of filling an existing order. When you do this, you become a market maker and thus pay no fees (when you fill an order from the order book, you are a market taker). 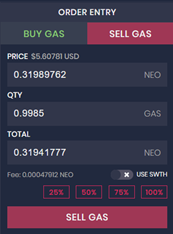 You can see my open order in the Your Transactions section here, as well as the previously completed Buy order.

In the end, nobody took up my open order, so I cancelled it by clicking the Cancel button under the Your Transactions section above. Now let’s withdraw my NEO and GAS back to my wallet. 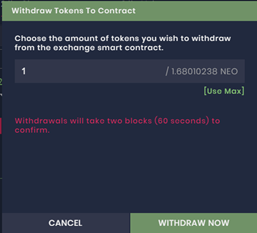 As mentioned, NEO cannot be withdrawn in decimals. Clicking the Use Max button will still keep it at 1 NEO. Withdrawals are supposed to take twice as long as deposits - 2 blocks or 1 minute. Unlike my delayed deposits, this time my withdrawal was processed promptly. 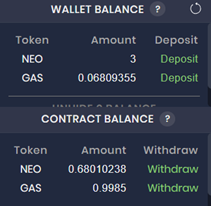 And that’s basically all there is to trading on Switcheo – it’s simple and basic, ideal for beginners. As for my remaining NEO decimals, I used it to buy GAS and then withdrew it into my wallet. 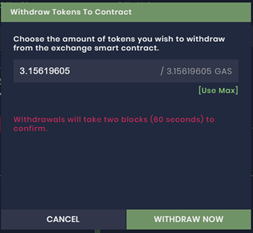 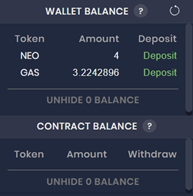 Let’s talk a little about Switcheo’s native token, SWTH. The utility of the token is straightforward; if you pay for Switcheo’s exchange fees in SWTH, it is halved. That’s the entire demand driver of the token. Also, SWTH tokens used for fees are burned.

Hence, the success of the SWTH token is directly related to the success of the overall exchange. If trade volume increases, more traders will elect to buy SWTH to pay exchange fees. Coupled with the fact that these tokens are burned, this will lower the supply which should have a positive effect on its price.

Since the ICO, the value of SWTH has fluctuated and is now below the ICO price. However with the recent launch the second version of the exchange, and the upcoming integration of QRC20 and ERC20 tokens, this could bode well for the value of the SWTH token.

Customer support is available via this page. It contains helpful articles and FAQs, plus a dialog box that you can use to send a direct message to the support team. Switcheo says that the majority of messages are replied to within a few hours.

In its present iteration, Switcheo clearly follows the keep it simple principle. The interface is intuitive and easy to use and only one type of fee is charged. While the lack of more advanced features such as more order types and technical analysis tools may put off the more sophisticated traders, it is doubtful that the average trader will find this much of an issue. Such features may also be added in the future, and may be necessary if Switcheo intends to compete with the bigger exchanges.

Although Switcheo’s trading volume currently remains relatively low (#148 out of 178 exchanges), keep in mind that it is still relatively new. Its first mover advantage as the first decentralized NEO exchange, coupled with the aforementioned QRC20 and ERC20 token integration, means that it has a lot of potential. In the meantime, for those looking to trade NEP5 tokens without trusting their funds to a centralized exchange, Switcheo is probably the best option out there right now.