Dead Coins: How Many Cryptocurrencies have Failed? 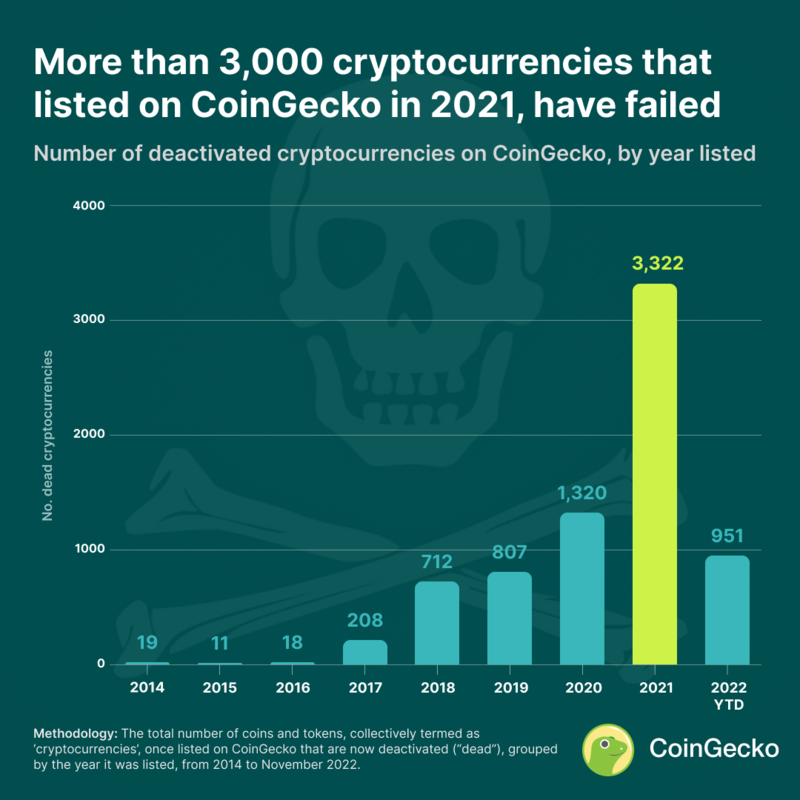 3,322 cryptocurrencies that were listed on CoinGecko in 2021, have failed (categorized as a dead coin).

The ‘meme coin season’ that took the industry by storm is a likely reason explaining the high number of ‘dead coins’ or failed cryptocurrencies from 2021. During this period, many cryptocurrency projects, tokens and coins with little to no value or any immediate or discernible purpose were launched by various anonymous developers. Few were actually committed to their projects, which resulted in a high rate of failure, and thus their ultimate demise.

A notable example of a dead coin would be Bitconnect Coin (BCC), which is now no longer listed on CoinGecko. Initially among the world's most successful cryptocurrency tokens, BitConnect was found to 'operate as a Ponzi scheme, by paying earlier BitConnect investors with money from later investors'. According to The U.S. Department of Justice, the price of its digital currency, BCC, was manipulated and falsely propped up 'to create the false appearance of legitimate market demand'.

On average, 947 cryptocurrencies listed each year end up failing

Excluding the anomaly year of 2021, an average of 947 cryptocurrencies listed are dead and end up failing in the last five years, between 2018 to 2022.

This study examines the total number of coins and tokens, collectively termed as ‘cryptocurrencies’, once listed on CoinGecko that are now deactivated (‘dead’ or ‘failed’), grouped by the year it was listed, from 2014 to 2022, year-to-date.

Cryptocurrencies may be deactivated and delisted from CoinGecko based on the following circumstances:

If you use these insights, we would appreciate a link credit to this article on CoinGecko. A link credit allows us to keep supplying you with future data-led content that you may find useful.

Curious to know more about the cryptocurrency landscape? Check out this one we did on Cryptocurrency Layoffs by Cities.

Tell us how much you like this article!
Vote count: 22

Julia leads Growth at CoinGecko and is passionate about onboarding more women onto Web3. That said, she is generally poor at timing the market, so she DCAs for safety. Follow the author on Twitter @ngxinyajulia

How Much Funds did Cryptocurrency Companies Raise in 2022?

Cryptocurrency companies raised $21 billion in 2022, which was 42% less than 2021, but still higher than previous years.