How are Bitcoin Wallets Supposed to Make Money?

There seems to be an endless list of bitcoin wallets available for those who wish to use the world’s most prominent cryptocurrency; however, the path towards profitability for the companies behind these projects seems a bit unclear. On a recent episode of Bitcoin Uncensored, Breadwallet’s Aaron Voisine and Aaron Lasher attempted to explain the path towards profitability for a bitcoin wallet to co-hosts Chris DeRose and Joshua Unseth. 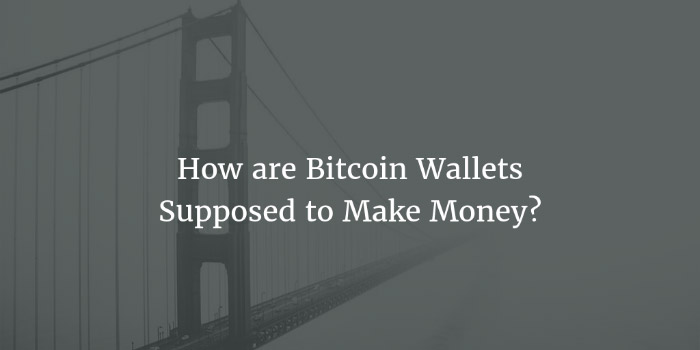 While they aren’t able to talk for the entire bitcoin wallet industry, Voisine and Lasher made it clear that part of a bitcoin wallet’s job is to attract new users to the space, which in turn leads to more users of their wallet. “Our focus is on attracting new users and making Bitcoin more accessible and easier to use for regular people,” Voisine stated.

For Breadwallet, the focus is on Bitcoin above everything else. When asked whether Breadwallet users will eventually be able to hold fiat currency in their wallets, Lasher responded simply, “No.”

“We’re focused on bitcoin. That’s the whole reason why we exist -- to help people use bitcoin,” Voisine added.

How will Breadwallet be able to bring new users to Bitcoin? “For us, the plans are to keep it as simple and clean as possible,” Voisine explained. “We want to focus really carefully on the payment experience -- keeping it fast, simple, and clean. And use that to try to attract users.”

Later in the interview, Lasher added, “We do think bitcoin has the potential to be a large, dominant, and global type of currency.”

Building a User Base

While creating new Bitcoin users is great for the entire industry, Breadwallet also wants to focus on carving out a chunk of users for their wallet. “If Bitcoin becomes a major, global currency and we have one of, if not the most, popular bitcoin wallet in the world, then I think that’s a very valuable position to be in,” Voisine explained.

According to Voisine, the focus is currently on developing an easy-to-use wallet that also offers the highest levels of privacy and security to its users. “We’re focused on user acquisition and growing our numbers,” Voisine responded when asked how he and Lasher expect to make money with their venture.

Lasher, who was an early investor in Breadwallet, explained the general philosophy behind his investment in the wallet:

During the interview, Lasher shared that 33.6 percent of their users are located in North America. When asked about the future consolidation of bitcoin wallet companies, Voisine agreed that there’s a lot of competition in the space and consolidation will eventually be needed.

Lasher also noted that Breadwallet has developed metrics to estimate how much bitcoin is being held in Breadwallet software around the world.

So what happens once a bitcoin wallet has attained a large user base, and what’s the point of gaining that user base if there’s no clear path towards revenue?

At first, Voisine replied that Breadwallet could follow a path similar to many other tech companies, such as Facebook and Twitter, who focused on user growth and acquisition rather than revenue in their early stages of development; however, Bitcoin Uncensored co-host Joshua Unseth was quick to point out that those companies rely on collecting large amounts of data from their users, which is something Breadwallet is not willing to do.

“Brokered third-party services. The first will be buying bitcoin, and you’ll be able to buy bitcoin from within Breadwallet. The reason that you would is that the experience is going to be very easy, very smooth, [and] very fast compared to other options people have. And we’ll take a very small cut of that.”

“We’re looking at a big business model change,” Lasher explained at another point in the interview. “We’re betting big on banking changing in the following way: Instead of having banks or third-parties hold your money, you’re going to have banking services, but you’re always in control of your funds.”

Over the years, free software companies have been able to find unique methods of generating revenue. For example, Google once paid Mozilla $900 million to be the default search engine in Firefox over a three-year period.

From Lasher’s perspective, Breadwallet will have a clearer road to revenue once there is a lot of money being held in their software by their users:

“From a certain perspective, we’re a company that has assets under management because every single person who uses Breadwallet, from a certain perspective, we’re a bank or a hedge fund holding those funds because we’re in charge of keeping them secure. We don’t control them, but it’s our job to make sure that the people who do own these coins can keep them securely.”