How to Bid on a Handshake Name Auction using Namebase

Handshake names are an alternative root zone for internet names that are managed and distributed by a decentralized blockchain instead of a corrupt(able) centralized authority. In this guide, I will show you the simplest way to bid on a Handshake top level domain: Using Namebase.io. The HNS I will be using for this auction is the HNS that I mined while writing my previous basic guide on “How to mine Handshake (HNS).”

Some notes on Handshake name auctions

Before we get into the steps to bid on a Handshake name, here are some terms that you should understand.

Bid: The amount of HNS that you are setting as your bid in the Vickrey auction

Blind: The amount of HNS that you’d like to send to the auction with your bid, which helps obfuscate your actual bid amount.

Lockup: The sum of your bid and your blind. This is what is seen on the Handshake blockchain and what your competing bidders will use to decide if they want to bid.

Vickrey Auction: A type of sealed-bid auction where the auction winner pays the second highest bid instead of the winning bid.

How a Handshake name auction works

The Handshake blockchain has naming auctions built into the consensus layer through the use of something called transaction covenants, which are a type of smart contract. Essentially, when sending an HNS transaction to interact with the consensus layer covenants, it is necessary to specify which covenant you are calling to place a bid, reveal a bid, renew a name, etc. The covenant types are as follows, all with self explanatory names. For more information on covenants, there’s no better source than the Handshake Whitepaper.

The auction process is simple and consists of two main periods: A 5 day bid period and a 10 day reveal period. When a Handshake TLD goes up for auction, there are 5 days where bidding is available. Following the 5 days of bidding, there are 10 days to reveal the bid and get your blind back. After the reveal period, the winning bidder will have his or her HNS burned by the blockchain in the amount of the second highest bid.

How Namebase simplifies participating in a Handshake name auction

Without further ado, let’s get into how to bid on a Handshake name auction!

Step 1: Create a Namebase account and fund it with HNS

a) Go to Namebase.io/register and agree to the terms of service and privacy policy. Once you do so, you’ll be able to decide whether to register using an existing Github account or with an email address. 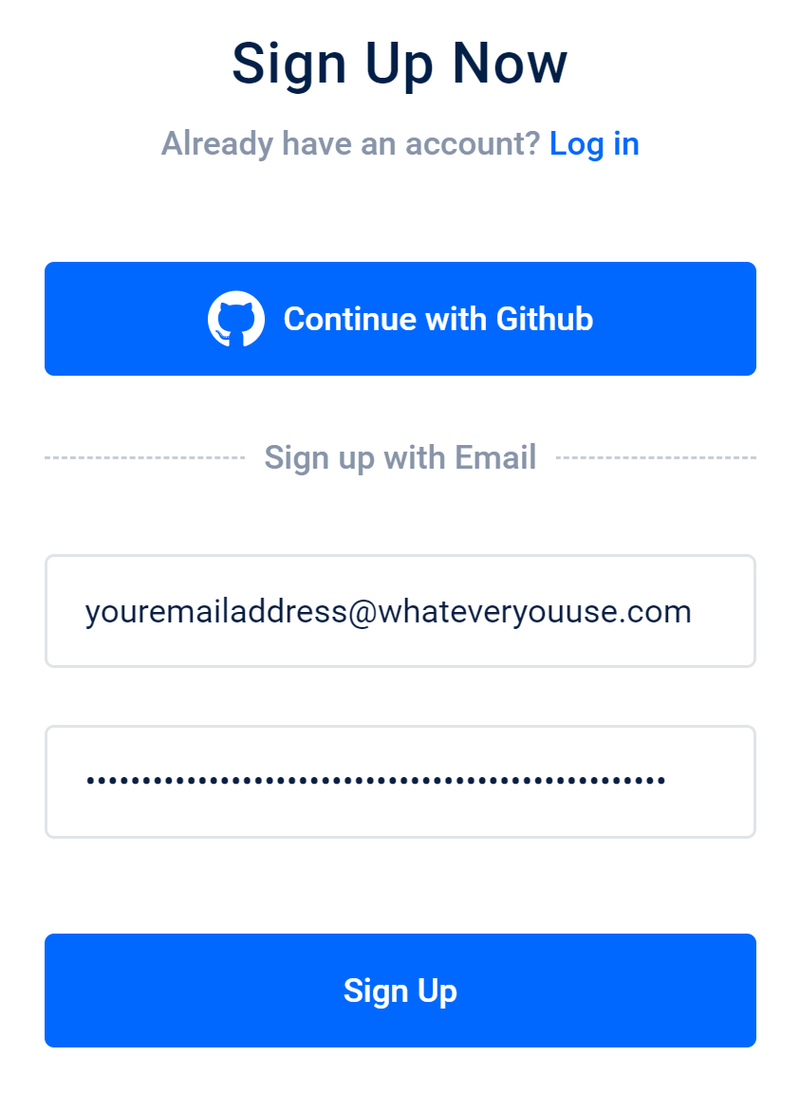 b) Once you have signed up, you’ll be directed to your Namebase dashboard. Click “Generate Address” to create a HNS deposit address on Namebase. 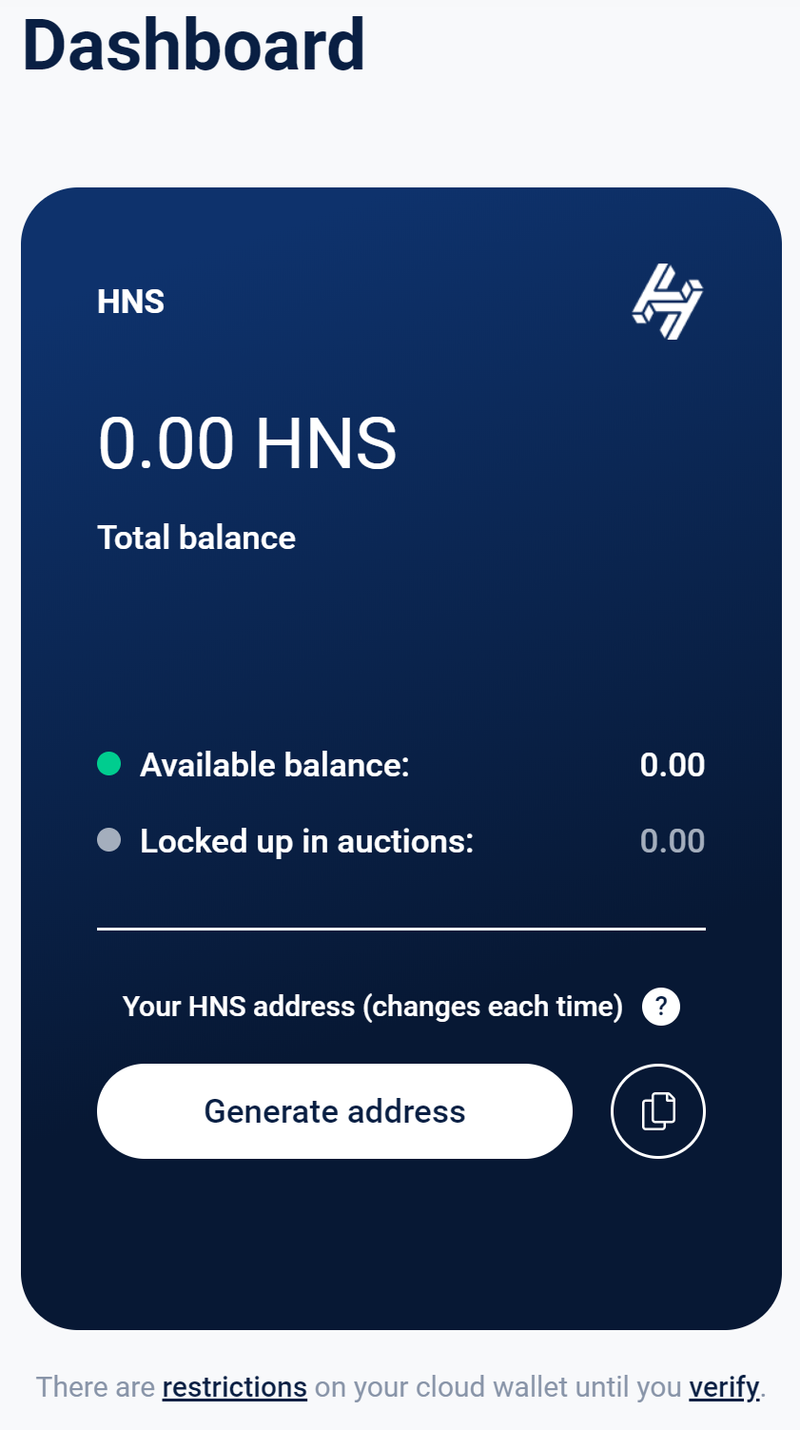 Step 2: Decide what Handshake name you’d like to bid on

a) At the Domains page on Namebase, you can search for your desired name and add it to your watchlist if it isn’t currently available for auction. For live Handshake auctions, Namebase organizes available domains by number of bids, and also by ending soonest. The default view on the Namebase website lists out domains by the number of bids first, then by ending soonest second. 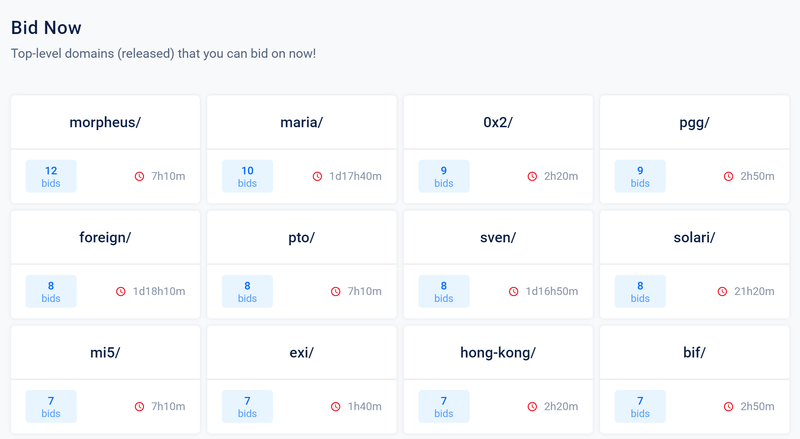 You can also find available top level domains by ending soonest too. There currently isn’t a way to search by “lowest price” as I often do on eBay. 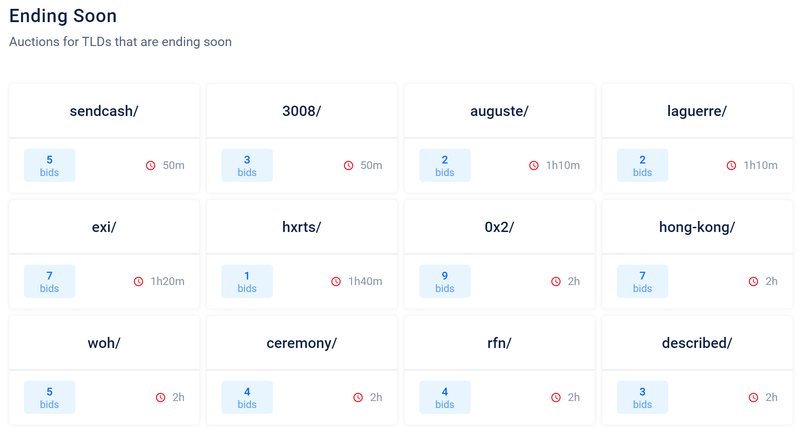 b) After searching through the existing Handshake auctions, I decided to try and pick up the cheapest Handshake TLD I could find - so I settled on tream/. Remember that tream/ is the top level domain - it is like a .com in the traditional domain name space. 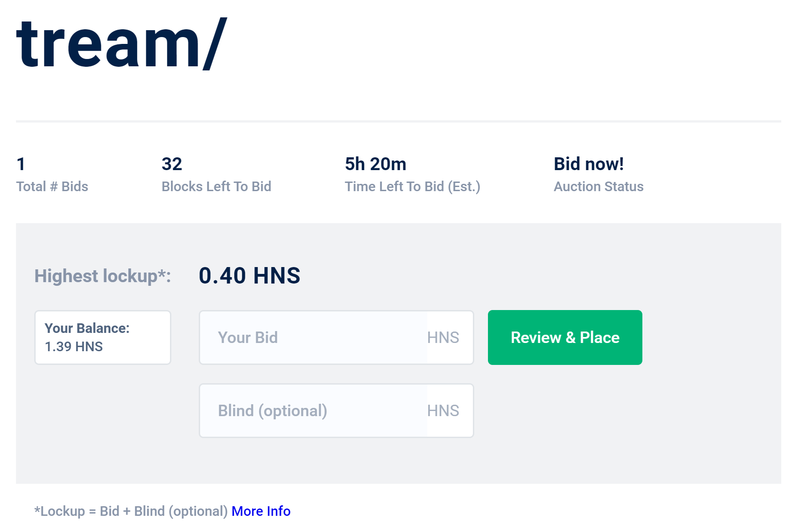 Step 3: Decide your bid and blind amount, then submit your bid

At the time of writing, bids range from 0.4 HNS all the way to 4500 HNS. It’s important to note, that due to the Vickrey auction style, the winner of the Handshake auction actually pays the second highest bid. That means if a Handshake name auction receives only one bid, the auction winner pays 0.00 HNS and receives the locked up amount of his bid (whatever the amount) back minus mining fees which are around 0.09 HNS at the time of writing. Because of this, pretty much every Handshake top level domain is receiving at least one bid. If you aren’t the winner of a Handshake auction, the blockchain will return your coins to you. No matter if you win or not, your blind amount that was locked up with your bid will be returned to you.

a) Not knowing how much of the 0.40 HNS that is locked up in the first bid is the actual bid versus the blind, I decided to play it safe and set my bid to 0.41 HNS and my blind to 0 HNS. This guarantees that my bid amount is higher than the bid amount from the first bid, and that I will win the auction provided no other bidders come around. 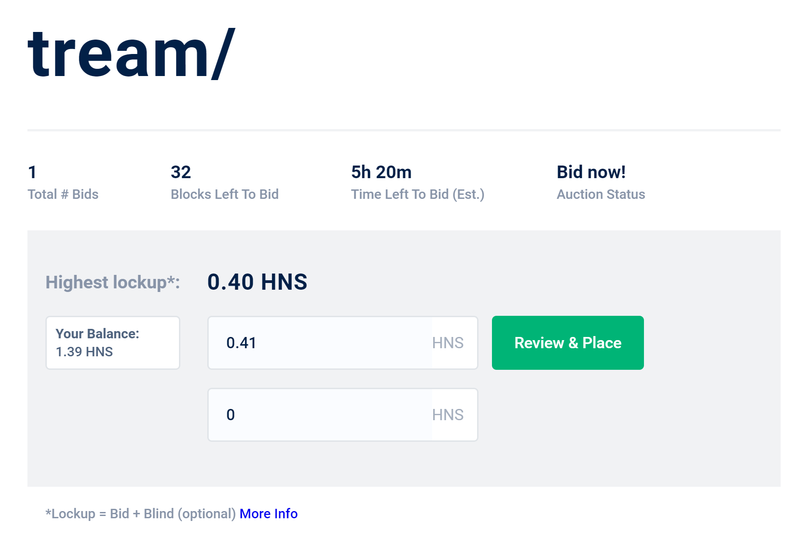 b) Namebase will have you review your bid and confirm it before sending it off. 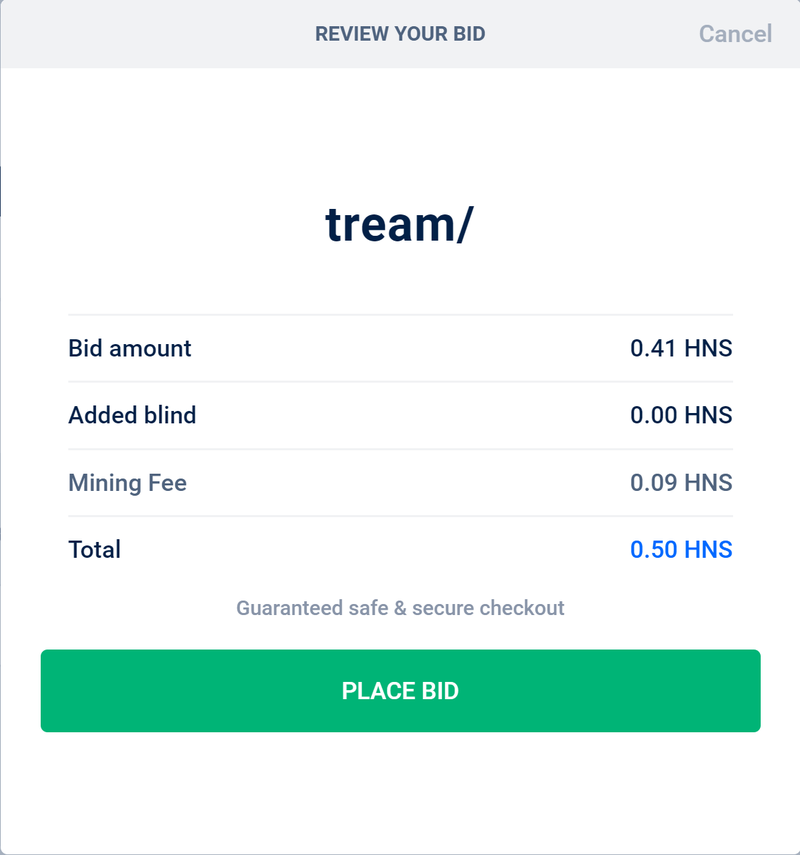 c) Once you click “PLACE BID,” you’ll receive a confirmation of your bid.

Step 4: Continue watching the auction to make sure you aren’t outbid. Enjoy your new Handshake name if you win!

a) Now that I’ve submitted my bid, I can see it in the bid history and the domain information for tream/. I am now waiting for the reveal period. However, if another bid comes in before the reveal period happens, I can decide whether or not I want to submit a new bid. 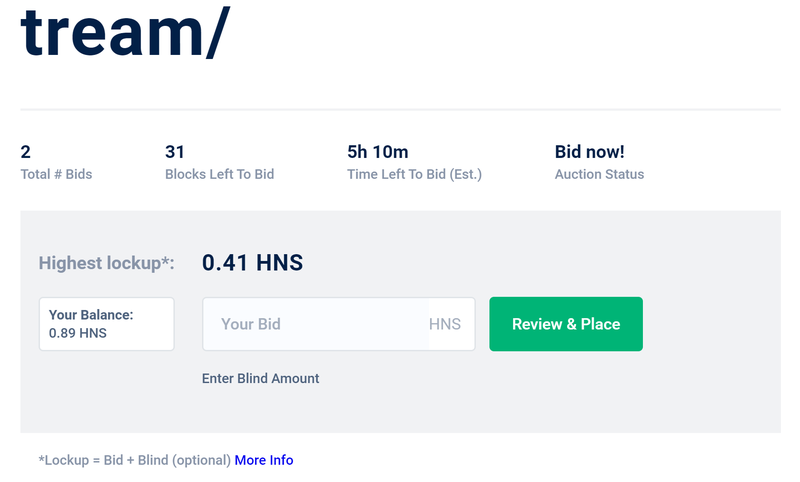 b) Shortly after bidding, I received notice from Namebase that someone had outbid me. Rats! 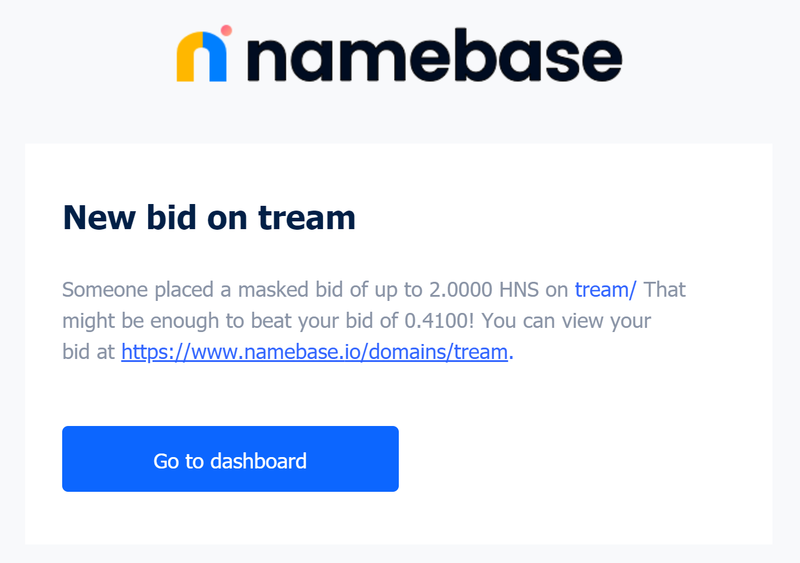 As a former editor at sites like CCN and BlockExplorer, Caleb has been writing about blockchain technology since 2013. He holds a MSc in Digital Currency from the University of Nicosia and believes that decentralized blockchain technologies such as Handshake are our best bet against a centralized, censored internet. Follow the author on Twitter @bitxbitxbitcoin