What was the highest price for Handshake?

What was the lowest price for Handshake?

What was the 24 hour trading volume of Handshake?

Where can Handshake be traded?

The Handshake project aims to create an alternative certificate authority and naming systems that is used for root Domain Name Server (DNS). It is decentralized and permissionless, typically compared to The Internet Corporation for Assigned Names and Numbers (ICANN) which is centralized. As of now names that are used in top-level domain names such as .com, .net and social networking usernames are centrally managed by a central authority.

What is the Handshake Protocol?

The Handshake Protocol consists of a node that anyone can participate permissionlessly to be part of a decentralized open naming platform. In order to run a node, you may refer to how to get started at https://github.com/handshake-org/hsd.

Why is there a Handshake Coin (HNS)?

Handshake Coin (HNS) is the native currency in the protocol that allows the transfer, registration, and update of internet names. The aim of introducing a unit of currency is in order to counter spams where someone claims and registers all the possible names without any form of control.

How are HNS allocated?

Free and Open Source Software (FOSS) developers are allocated the majority of its initial coins. This is done by way of allocating HNS coins to Github users that meets the minimal requirement of open source activity. If you are an FOSS developer, you may claim it by visiting https://handshake.org/claim/.

Where can I trade HNS?

The exchange with the best liquidity to trade HNS right now would be Namebase. 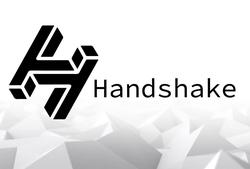 What is a Handshake (HNS) name? 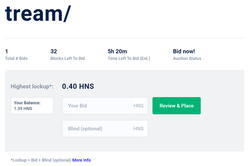 How to Bid on a Handshake Name Auction using Namebase

In this guide, I will show you the simplest way to bid on a Handshake top level domain name using Namebase.io

How to Mine Handshake (HNS)