In our series of articles on how to buy bitcoin in Asia, we previously took a look at how to buy bitcoin in Malaysia, Singapore, Vietnam and Thailand. In this article, we will look at how to buy Bitcoin in The Philippines, the second most populous country in South East Asia with a population of about 100 million people. The Bitcoin ecosystem in The Philippines is very vibrant and competition for Bitcoin purchases is very intense among the brokers and exchange operators.

Headed by Sam Kaddoura, along with founders Lasse Birk Olesen, Daniel Walton and James Florentino, BuyBitcoin.ph enables locals to buy bitcoin at over 800 Bank of the Philippine Islands (BPI) branches in the country. Coming from a business background, Kaddoura has worked in corporate finance in Silicon Valley while Oleson, having managed Bitcoin Nordic, one of the largest Bitcoin resellers in Europe, also brings to the table his experience in payment and fraud preventions.

Kaddoura has big plans for BuyBitcoin.ph. Not only is he targeting the tech-savvy group, but he also wants to expose the unbanked population to Bitcoin and it’s perks: convenience, lower processing fees and faster transactions.

Coins.ph launched in the the Philippines in 2013 with the aim of giving more payment options to consumers, especially in South-East Asia. With low credit-card penetration in this region, co-founder Ron Hose believes that this can help increase e-commerce transactions in this region.

It’s new platform, SendMoney allows Filipinos to receive remittances in bitcoin. Through SendMoney, worldwide bitcoin transactions can be made to locals, who can then collect their bitcoin in local currency via 22 different options within 8 hours, including Citibank, Maybank and Union Bank.

Coinage is the Philippines’ first enterprise-grade order book bitcoin exchange platform. It is a subsidiary of Satoshi Citadel Industries, a Bitcoin business involved in various Bitcoin verticals such as remittance (rebit.ph) and bill payments (bills.ninja). One of their most popular initiative is the launch of Bitstars, an initiative that gives out free bitcoins to users with the most voted selfie of the day.

Coinage is led by Anthony Giovanni Chua and Oscar Bicada III. Besides Coinage, Satoshi Citadel Industries is also involved with selling prepaid bitcoin cards where users can redeem their bitcoin on prepaidbitcoin.ph 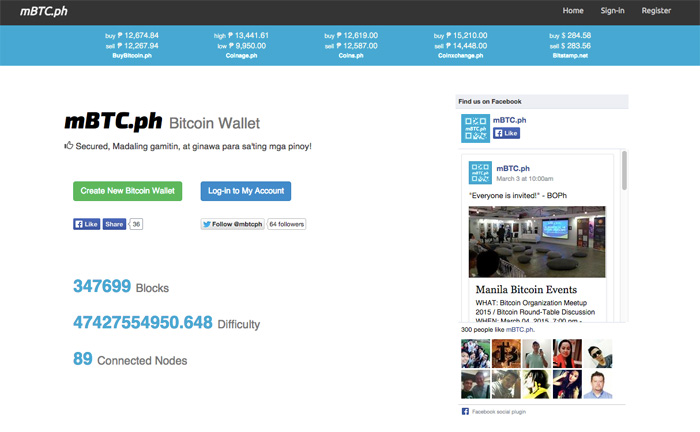 mBTC is another bitcoin brokerage in The Philippines. Users can create a wallet and proceed to buy/sell bitcoins using the platform. mBTC is the smallest of the Bitcoin companies helping users to buy and sell bitcoins when compared to the above 3 companies.

Embed this BTC-PHP widget in your blog by clicking here.

How To Buy Bitcoin in Malaysia (2021 Updated)