One of the first steps in getting started with owning your first bitcoin is to set up a wallet. There are many wallet options these days as shown on bitcoin.org - from desktop, mobile, hardware to online wallets. There is also the option of using paper wallets and storing your bitcoin in cold storage.

Cold-storage and offline wallets are really good in maintaining the security of your bitcoin but truthfully, they are pretty darn hard to set up, time consuming and not-to-mention requires a certain degree of technical ability to not mess up all the required steps.

It is not surprising that most people use an online wallet like Coinbase or Blockchain.info to store their bitcoin. In fact, I personally advise anyone getting started to buy their bitcoin from Coinbase (if it is available in their country) and to use the Coinbase wallet because it is the simplest wallet available. However once they start accumulating a larger amount of bitcoin, I would encourage them to think harder about wallet security by using a service like Coinbase Vault or a hardware wallet like Trezor.

We at CoinGecko Buzz are really interested to review the overall functionality, ease-of-use and security of a Bitcoin hardware wallet and requested for a Trezor to review things further.

Trezor is a product of SatoshiLabs, a Czech Bitcoin startup who is also behind Slush’s Pool, the first Bitcoin mining pool and CoinMap, a map containing bitcoin-accepting locations. Retailing for US$99, the Trezor comes in 3 colors - white, grey and black (US$109 for the black device).

Our Trezor arrived in the post using a normal registered mail service from our national postal company. 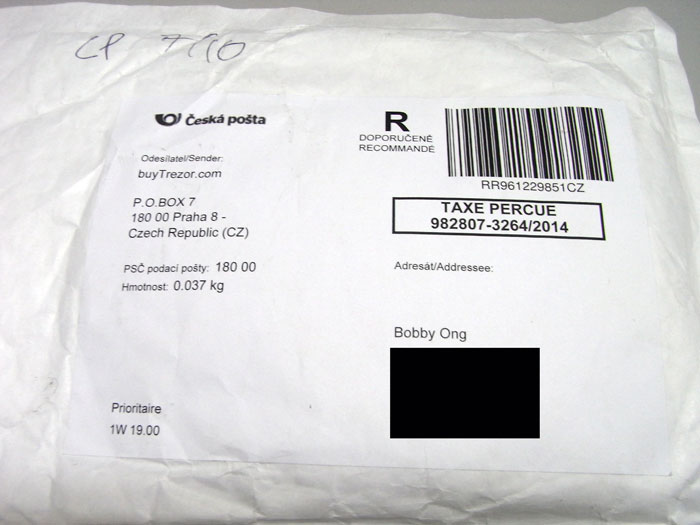 It was obvious from the envelope that this is from Trezor as the sender's name is written as buyTrezor.com on the top left. I would have preferred if Trezor is not written anywhere on the envelope and for it to have arrived via a courier like DHL or UPS for added security but this shipping manner works perfectly fine as enough security is provided in the Trezor packaging as explained below.

Below is how the Trezor packaging looked after removing it from the envelope and transparent plastic wrapping. You will notice that at the top there is a hologram sticker that if tampered with, will be pretty obvious to anyone. 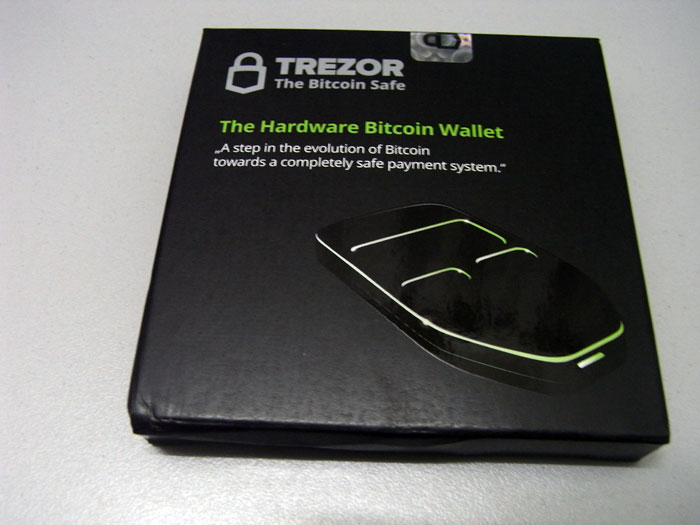 Removing the hologram sticker, I must then open the box and boy, was that one heck of a glue that those guys in SatoshiLabs used to seal the boxes. Opening the box causes it to be pretty much destroyed. 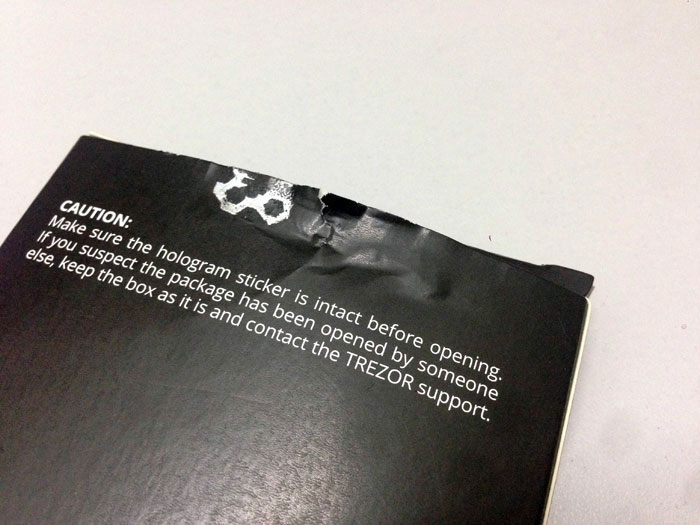 Inside the Trezor packaging is the white Trezor which I requested. 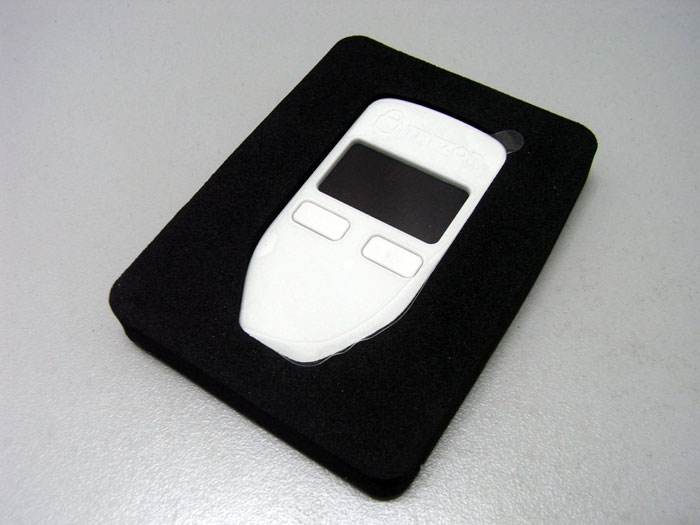 The Trezor came with a lanyard and a USB connector. The guys at SatoshiLabs were generous enough to also provide some Trezor stickers. 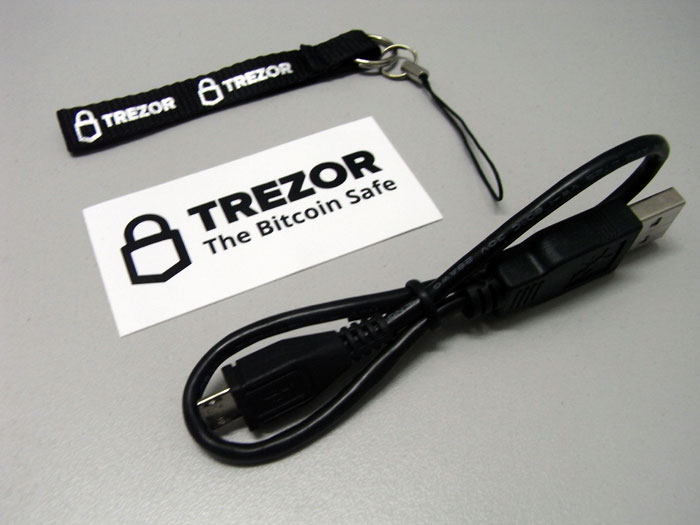 Just in case you are wondering how large the Trezor is, I placed the Trezor next to my iPhone 5 for comparison. It measures 60x30x6mm and weighs 12 grams. It’s tiny and light! 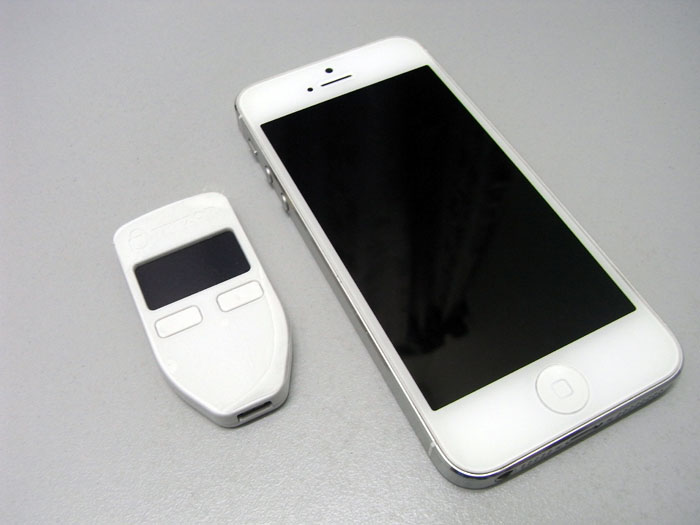 Getting Started with Trezor

To get started, I had to read this double-sided manual, which was quite lengthy. I had to read it twice to digest all the information in the manual. 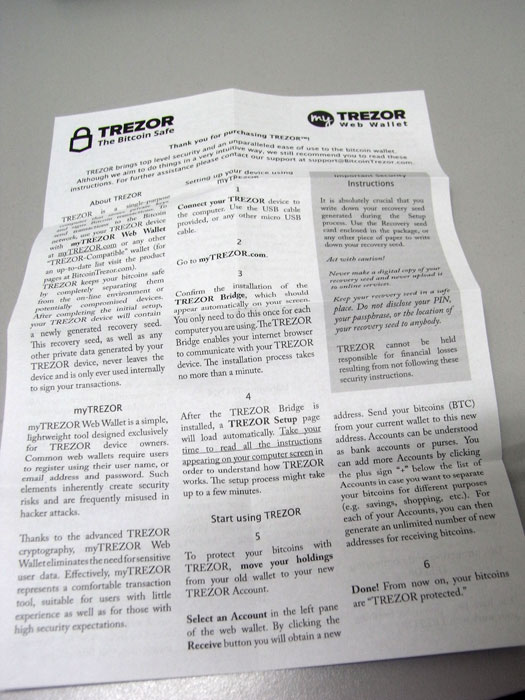 In the manual, it is stated that I can use the Trezor with the myTrezor.com web wallet or any “Trezor-Compatible” wallets aka Trezor Apps. 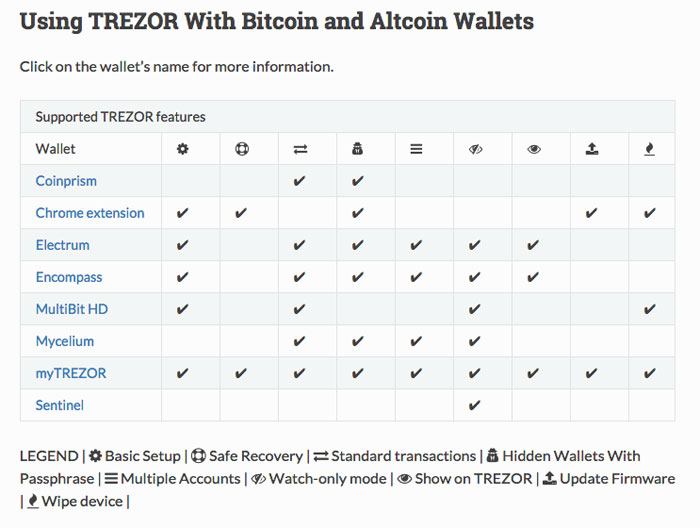 I seem to have the option to use Trezor with desktop wallets like Electrum and MultiBit HD. According to the manual, I should connect the Trezor device to the computer and then install the Trezor bridge on myTrezor.com 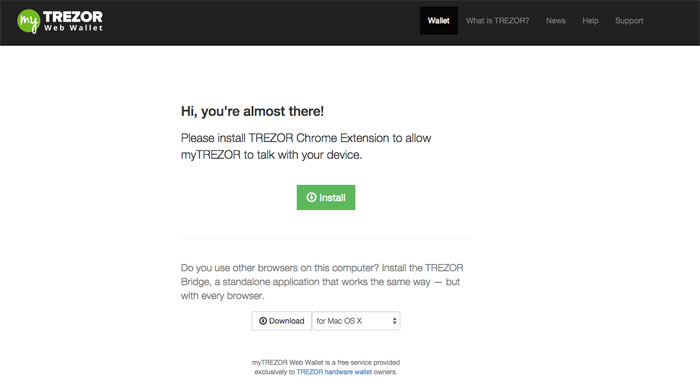 I followed the steps to install the Trezor Bridge and upon completion, I went back to myTrezor.com. I am now presented with a page to configure the Trezor device.

This process actually involves me clicking my PIN number on my browser and is an important security step. Since the 1-9 keypad combination is scrambled each time the device is loaded, an attacker could not get hold of my bitcoin even if they know my PIN because they would not know the location of the 1-9 keypad combination without having the device.

The recovery seed is important to ensure that the wallet can be salvaged if the Trezor device went missing. The Trezor wallets is created using the BIP39 and BIP44 standard so the generated recovery seed can be used on other compatible wallets.

Upon completion of the recovery seed step, the Trezor device is now configured properly.

Notice at the top of the myTrezor.com website, it is stated that the Trezor device I am using is using has an old firmware version. I decided to upgrade the firmware to see how it is like and am presented with this screen. 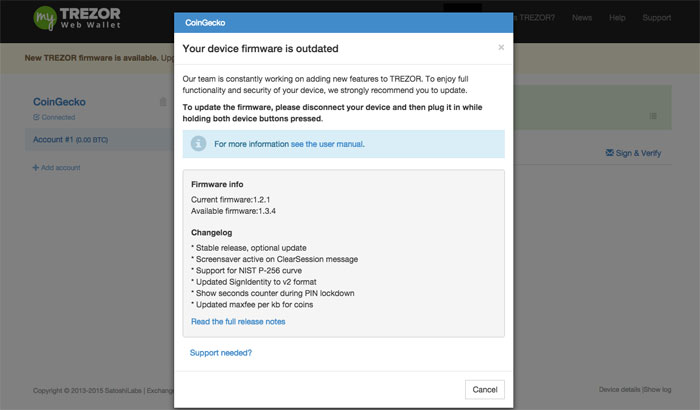 Upon plugging in the Trezor again, I was asked to key in my PIN on the browser using the scrambled 1-9 keypad combination. 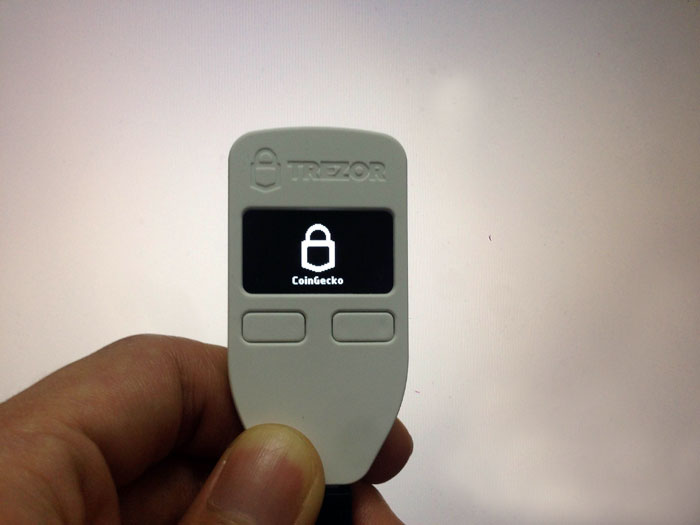 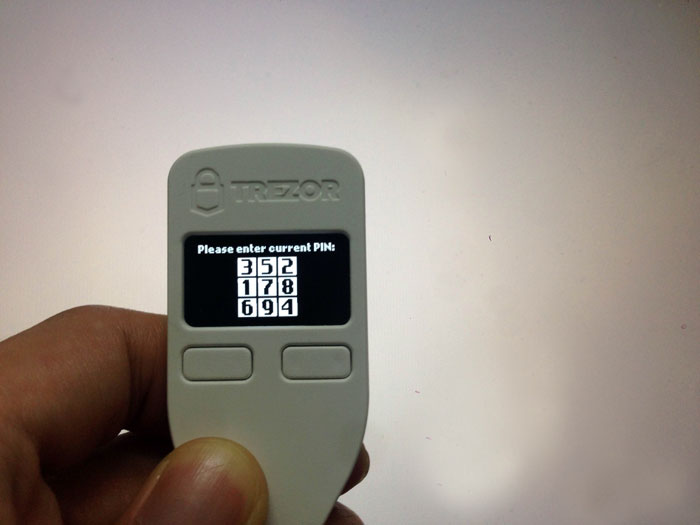 The firmware update is now complete. It is very hassle-free and the user experience of upgrading was good.

Receiving and Sending Bitcoin on Trezor

Next, I decided to give this hardware wallet a go by loading up some bitcoin to the myTrezor.com wallet.

One cool feature is the ability for the Bitcoin address to be displayed on the Trezor device to ensure that the generated address is genuine.

Safe from knowing that this address is legit, I proceeded to send some bitcoin over to the myTrezor.com wallet. Receiving bitcoin on the Trezor works like any other Bitcoin wallet.

Once the earlier transaction has been confirmed, I decided to send a portion of the funds back. 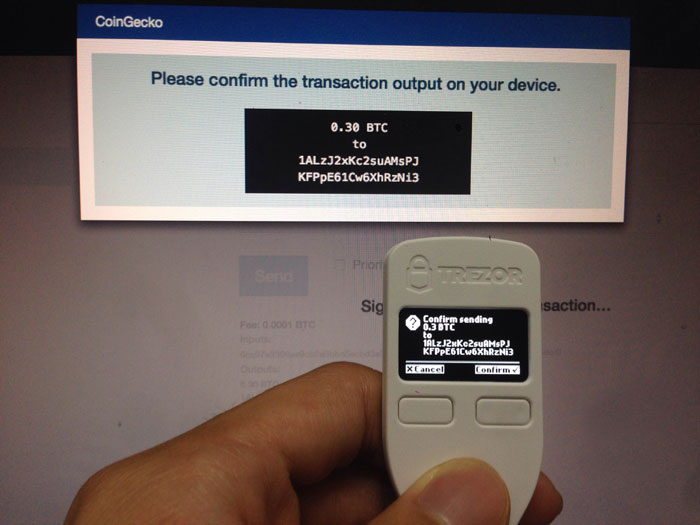 I had to confirm again on the Trezor device if I really wanted to send the 0.3 BTC back which I duly confirmed. Upon confirmation, my transaction is broadcasted out to the network.

I tried using the Trezor device on the Electrum desktop wallet just to see how it would work on a desktop wallet. The manual provided on the SatoshiLabs website works perfectly as stated.

Creating a new wallet was seamless and took only a few minutes after the initial setup on myTrezor.com has been completed. This is an image of my pending transaction on the Electrum wallet. 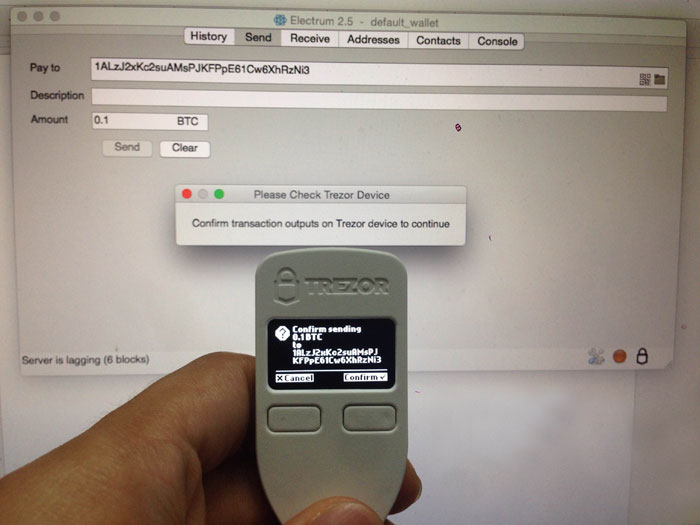 This Trezor device supports not only Bitcoin but also several altcoins such as Litecoin, Namecoin, Dash and Dogecoin. To store altcoins on your Trezor, you need altcoin-compatible wallet like Encompass or the Electrum equivalent fork for the altcoin like Electrum-LTC and so on. The really cool thing about Trezor is that the same device can be used to store several altcoins including Bitcoin at the same time!

Overall, I think the Trezor device is a very simple and easy-to-use device. It certainly provides for an added layer of security. Initially, I thought that the security offered by Trezor is almost similar to Authy's two-factor authentication systems used by Coinbase and Blockchain.info web wallets because I thought that myTrezor.com is yet another online wallet.

As you noticed, I actually did this review on my laptop and one of the early criticism of the Trezor device is that it does not support mobile use. This is no longer the case because the Trezor device can now also be used together with the Mycelium Android wallet where the Trezor can be connected using an Android On-The-Go USB adapter.

Unfortunately, the Trezor could not be used together with an iPhone yet. According to a Trezor representative:

"Support for iPhones is planned, but due to high costs of licensing fees and other issues, it has low priority for now."

As a whole, I would say that the Trezor device is sleek, very polished and has a top-notch user experience. Since the Trezor is designed mainly for large Bitcoin holders who wants added security without the headache of implementing cold-storage solutions, I would say that this is a good hardware solution to ensure that your bitcoin are securely stored.

For the price of only $99, this device is certainly a catch. Get your Trezor device now!