Avalanche is a decentralized smart contract platform that allows for transaction confirmations under one second, while maintaining low fees. It was created by Ava Labs, led by Emin Gün Sirer, and their mainnet was officially launched on 21st September 2020. The project has raised tens of millions of dollars from reputable investors such as Polychain Capital and Galaxy Digital.

What are AVAX tokens?

The AVAX token is the Avalanche network’s native token. Out of the maximum supply of 720,000 tokens, half of those will be on the mainnet. AVAX tokens are mainly used to pay transaction fees to validators, staking, and serves as the basic monetary unit for the Avalanche ecosystem.

Avalanche is a deflationary blockchain, which means that fees collected from various actions performed on the network are burned, which reduces the circulating supply of AVAX as the network continues to expand.

How does Avalanche work?

Although Avalanche can be used to support multiple custom blockchains, the network is centred around 3 interoperable blockchains, respectively known as the Exchange Chain (X-Chain), Platform Chain (P-Chain), and Contract Chain (C-Chain).

The Exchange Chain is used to mint new digital assets, while the Contract Chain is primarily used for smart contract execution and interaction, similar to Ethereum’s Virtual Machine. Finally, the Platform Chain is used to coordinate validators and create new subnets.

Subnets are a unique feature of the network, allowing anyone to create their own Layer 1 blockchain on Avalanche. Essentially, they are a set of validators that work together to achieve consensus on a group of blockchains. To make another subnet or to join an existing one, participants need to pay fees in AVAX tokens.

Returning our focus to the main blockchains of Avalanche, the P-Chain and C-Chain are secured using the ‘Snowman’ consensus - which is optimized for smart contracts, allowing for high throughput. On the other hand, the X-Chain is secured using the Avalanche consensus, which can achieve transaction finality in seconds. 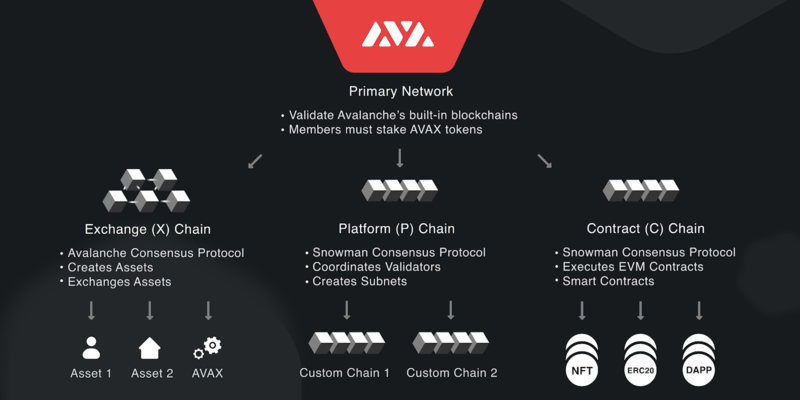 By splitting the Avalanche infrastructure into 3 parts, the network can be optimized for speed, flexibility and security, with little to no trade-offs.

To learn more about the Avalanche network, you can head over to their documentation.

How do I get AVAX tokens?

You can obtain AVAX tokens by purchasing them from cryptocurrency exchanges such as Binance or OKEx.

Besides that, you can earn AVAX rewards by becoming a validator and helping to secure the network. Users can also choose to delegate their tokens instead, where a minimum of 25 AVAX is required, and the minimum delegation fee is 2%. The maximum amount of time for validators and delegates to maintain their staked tokens is 1 year.