Portfolio
Portfolio New Price Alert Login and Security Developer's Dashboard Subscription Sign Out
Login
Search
Price alert successfully saved!
Open our mobile app to receive alerts on the go 🙌
Tokenomics data for this coin is currently unavailable.
Please send us a request for coins you would like to see Tokenomics data on. The Gecko team will try their best to curate the data!
In the meantime, check out some other coins that currently do have Tokenomics data here!
Rank #1114

Hop Protocol is a blockchain bridge protocol that allows users to move tokens from one chain to another without having to wait for a challenge period. This is more applicable for roll up chains such as Optimism and Arbitrum, in which the challenge period can take up to 7 days.

It is also possible for users to provide liquidity to Hop Protocol in order for other users to utilize the cross chain transfer. For each transfer, liquidity provider can earn fees from the swap.

Where can you buy Hop Protocol?

HOP tokens can be traded on decentralized exchanges. The most popular exchange to buy and trade Hop Protocol is Velodrome Finance, where the most active trading pair HOP/WETH has a trading volume of $34,585.43 in the last 24 hours. Other popular options include Sushiswap and Uniswap (v3).

What is the daily trading volume of Hop Protocol (HOP)?

What is the all-time high for Hop Protocol (HOP)?

What is the all-time low for Hop Protocol (HOP)?

What is the market cap of Hop Protocol (HOP)?

Market capitalization of Hop Protocol (HOP) is $6,941,755 and is ranked #1114 on CoinGecko today. Market cap is measured by multiplying token price with the circulating supply of HOP tokens (61 Million tokens are tradable on the market today).

What is the fully diluted valuation of Hop Protocol (HOP)?

The fully diluted valuation (FDV) of Hop Protocol (HOP) is $113,650,538. This is a statistical representation of the maximum market cap, assuming the maximum number of 1 Billion HOP tokens are in circulation today. Depending on how the emission schedule of HOP tokens are designed, it might take multiple years before FDV is realized.

How does the price performance of Hop Protocol compare against its peers?

With a price increase of 29.10% in the last 7 days, Hop Protocol (HOP) is outperforming the global cryptocurrency market which is up 1.75%, while outperforming when compared to similar Ethereum Ecosystem cryptocurrencies which are up 7.56%.

What is the market sentiment of Hop Protocol today?

The community is bullish as more than 100% of users are feeling good about Hop Protocol (HOP) today.

How to add Hop Protocol (HOP) to MetaMask?

Adding Hop Protocol (HOP) to MetaMask allows you to view your token holdings, trade on decentralized exchanges, and more. To add them, you’ll need to import HOP as a token. You can copy HOP’s contract address (0xc5102fe9359fd9a28f877a67e36b0f050d81a3cc) and import it manually, or add HOP to MetaMask with one click on CoinGecko.

What is Vesting in Crypto? Understanding Crypto Vesting Schedules

Vesting is the process of locking up a designated percentage of a token's supply for a specified period of time or until conditions are met. 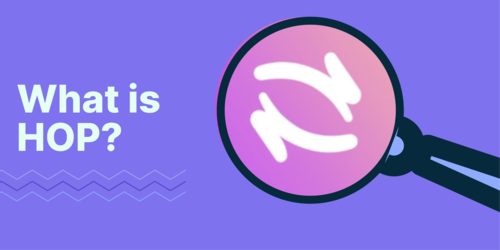 Hop protocol is a cross-chain solution that facilitates the secure bridging of crypto assets across side chains, Layer 2 solutions, and Layer 1 blockchains