Hey Geckos! The Top 30 coins closed out with a total market cap of $2.0T - the market cap hit an ATH at $2.5T in November, before taking a dip at the end of the year. Many narratives formed, giving rise to a bullish surge of altchains, NFTs, and even meme coins; all the while sending Bitcoin’s dominance tumbling to a historical low. 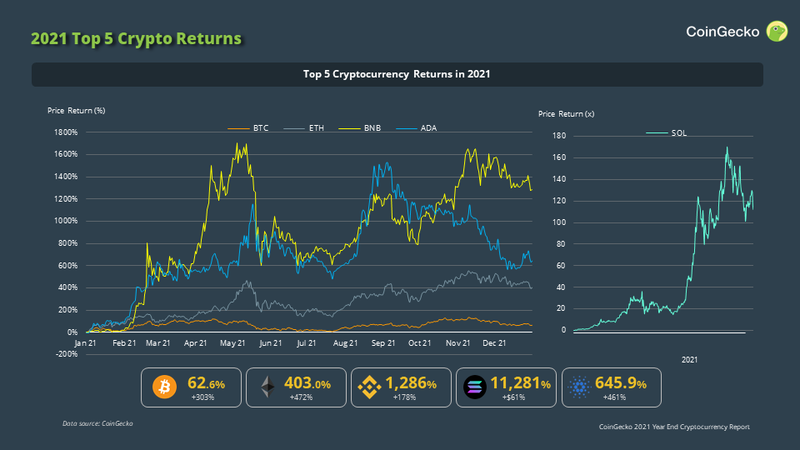 SOL only broke into the Top 5 in Q4 2021, pushing out XRP, DOGE and DOT which were all on the Top 5 crypto list at various points during the year.

Other than SOL, LUNA, SHIB, MATIC, AXS and FTM in the Top 30 all delivered 5 digit percentage returns or more during 2021.

2. An estimated $14 billion was lost through bugs and exploits in 2021 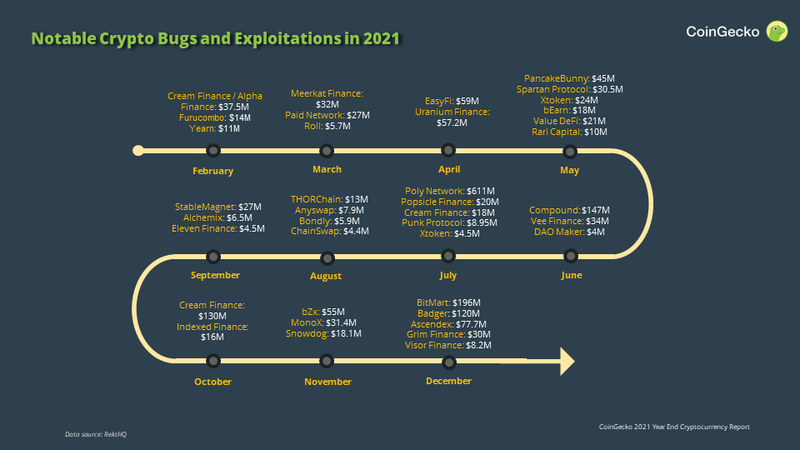 2021 was an action-packed year with an estimated $14 billion lost through bugs and hacks throughout the year.

The largest hack of 2021 took place in August when Poly Network was exploited for $611 million. This makes it one of the largest crypto hacks to have ever taken place.

Compound’s reward Reservoir bug was the largest of the year, with $147 million worth of COMP drained before the bug was patched.

Polygon discovered a critical vulnerability in their PoS genesis contract on Dec 3 which put 9B MATIC at risk. A silent network upgrade was executed within 24 hours, but not before a hacker made away with ~800k MATIC ($1.6M).

Certain protocols were hacked multiple times in the year. Cream Finance (CREAM) was hacked three times in 2021, losing a total of $185.5 million. THORChain (RUNE) was hacked twice in July, setting it back by $13 million.

3. An eventful year for Bitcoin in 2021, but relatively muted price action 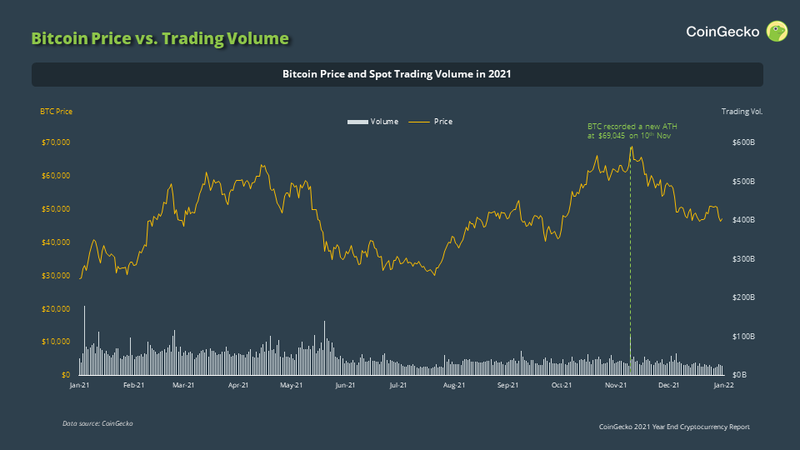 Price action of BTC throughout 2021 was rather muted when compared to 2020. However, Bitcoin still ended the year on a positive note at $47,191, representing a 62.6% increase year-on-year.

The year was marked by many noteworthy events for the asset: 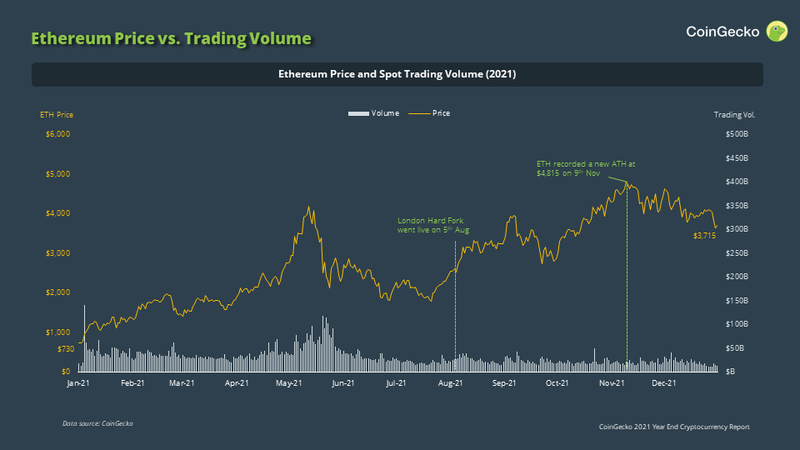 In a year filled with altchains and “Ethereum Killers”, ETH still ended the year on a strong note at $3,715 – a whopping 403% year-on-year increase.

The year was marked by many notable upgrades to the network in preparation for the arrival of Eth2.0 in 2022:

5. Altchains have performed exceptionally with Fantom leading the pack 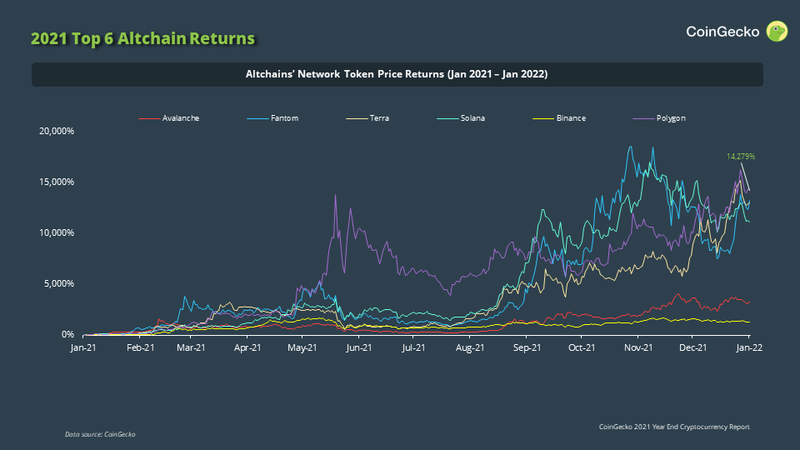 There is a clear demand for Ethereum / Bitcoin alternatives as users flock to other altchains.

Other altchains have also seen huge positive price returns (<1,000%), though nowhere near the levels of the Top 6.

6. DeFi closed out the year with a bang! 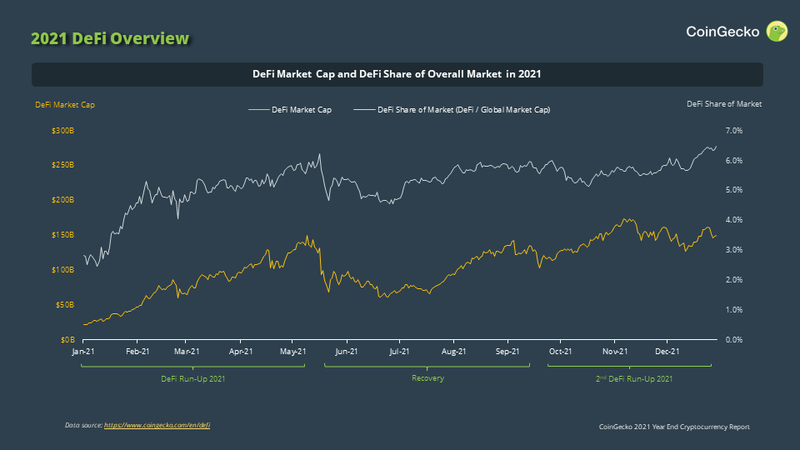 The resurgence of DeFi in the final quarter of 2021 may be attributed to a new generation of DeFi products nicknamed ‘DeFi 2.0’. These products seek to improve the design of the original DeFi protocols.

On top of that, the rise of incentives for new alternative EVM networks such as Cronos (CRO), Aurora (AURORA) and Boba (BOBA) have driven demand for DeFi tokens on these blockchains.

Although the DeFi market cap has retraced towards the end of the year, it reached an all-time-high of $174 billion in November.

7. NFTs were plastered across the headlines in 2021 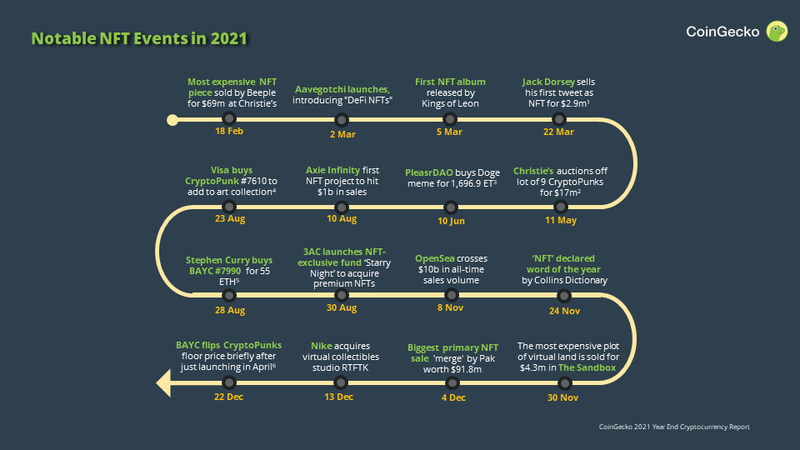 Big brands from sportswear, fashion, tech and even F&B jumped on the NFT bandwagon -among the names dropping NFT collections include Nike, Adidas, Dolce & Gabbana, Phillips, Budweiser and even Pringles!

NFTs received no shortage of celebrity endorsements in 2021. Big names such as Snoop Dogg, Grimes, Deadmau5, and Post Malone all added momentum to the NFT hype train. 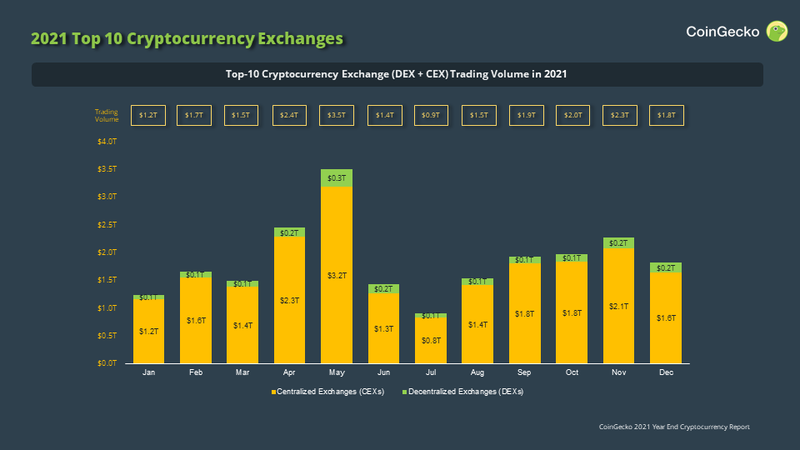 Other than an increase in November, monthly trading volume in Q4 essentially remained at the same levels as September.

Monthly trading volume in Q4 has been the highest since the run up and subsequent dip in Q2.

Notably, the DEX:CEX ratio has steadily increased from 6% at the start of the year to 10%.

This is just a fraction of what we cover in our report - Grab your copy of the full report:

(Psst! CoinGecko users can easily grab this and past reports right here!).

Like what you see? Here are two ways you can get more:

Sign up for our newsletter to get daily crypto updates 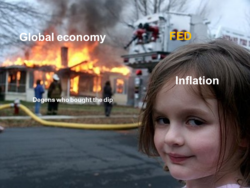