How To Play Axie Infinity: A Beginner’s Guide

This guide will provide an overview of Axie Infinity’s basic gameplay for new players who just started with the game. If you haven’t set up an account and gotten your first 3 axies, please read our guide at how to get started with Axie Infinity. 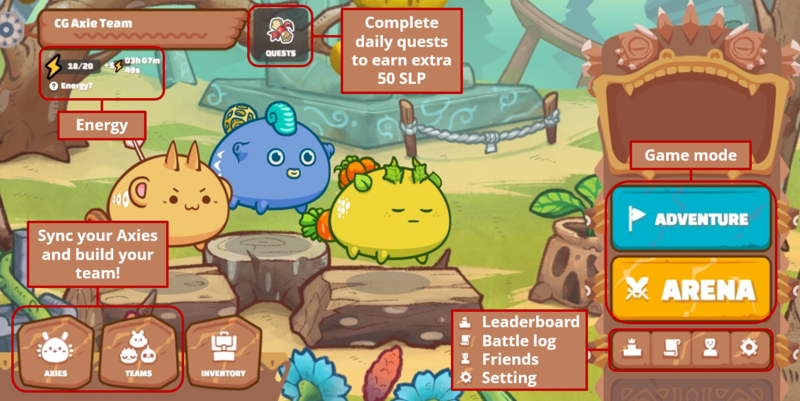 Once you have gotten at least 3 Axies from the marketplace, head straight into the game and sync your Axies: Go to AXIES > Sync Axies. Your Axies should appear once it finishes syncing. Then, build your team formation on “TEAMS''

Currently, there are a total of 2 game modes:

If you win in any of the game modes, you will be rewarded with a SLP token. SLP is one of Axie Infinity‘s in-game currencies and it is tradeable on exchanges such as Binance and Uniswap.

Also, Axies can increase in level by getting EXP from winning Adventure Mode.

Each Adventure/Arena battle costs 1 Energy. You can still play any of the modes if you use up all the energy, but you will not receive EXP in Adventure Mode and SLP rewards in Arena Mode. 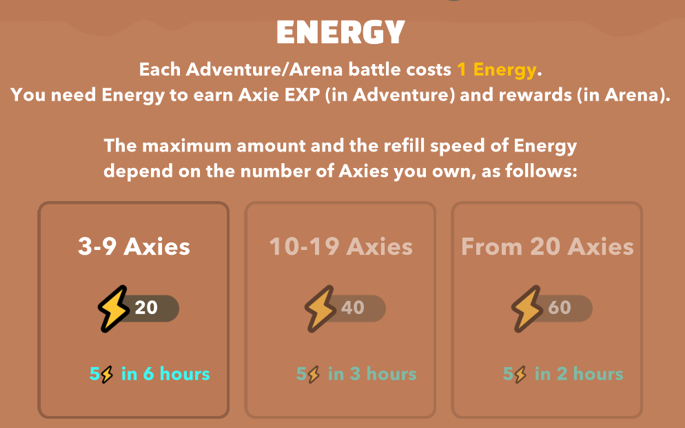 The maximum amount and the replenish speed of Energy depend on the number of Axies you own.

There are a total of 3 simple daily quests to be completed. You can claim a fixed 50 SLP every day by finishing all the quests.

Some of the daily quests include the following :

It is recommended for a new player to start by playing Adventure Mode. You can earn Axie EXP and up to 100 SLP per day by playing it.

An Axie will get stronger as it increases in level (for Adventure Mode only). Also, it is important to train your Axies’ EXP so that you can farm at a higher-level stage and grind your daily 100 SLP faster. 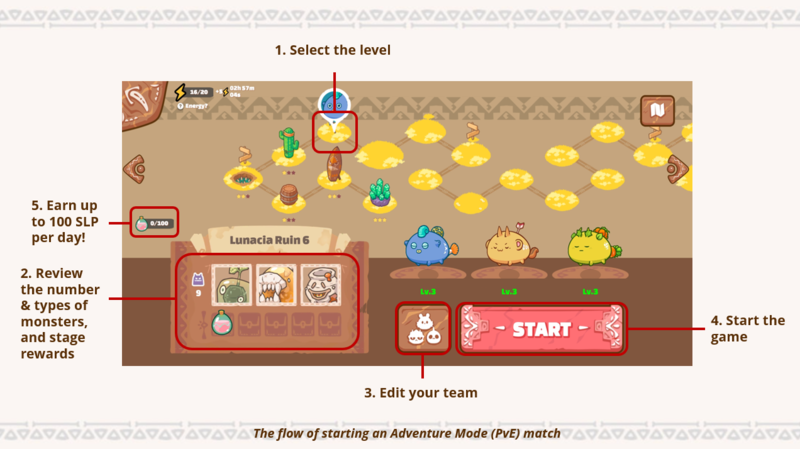 Another thing to note is that the levels start off easy but it will get harder to win as you progress. However, don’t give up yet as you can always farm at the previous level to gain Axie EXP and rewards. 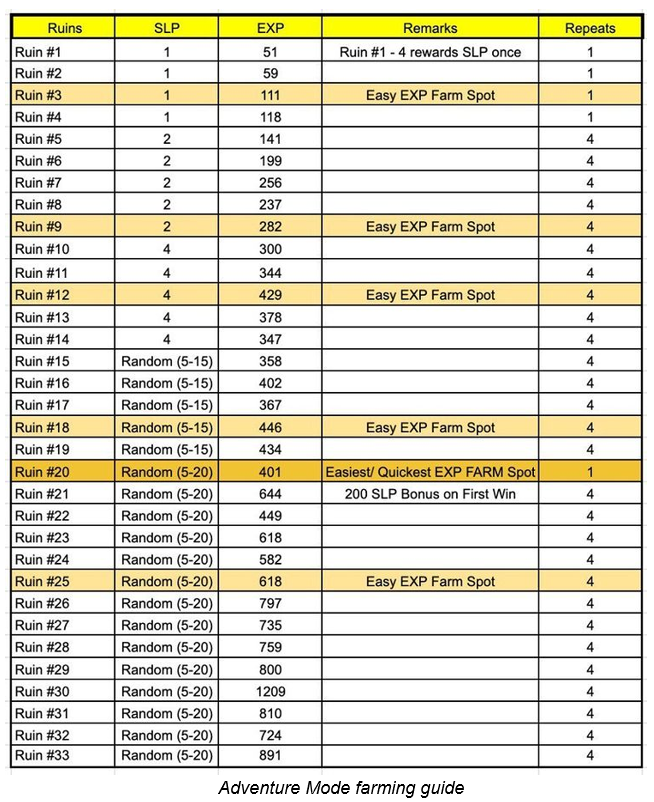 Based on your Arena MMR (Matchmaking Rating), you will earn different amounts of SLP for each Arena win. The higher your ranks, the more rewards you will get per win. Take note that this is an average based on community calculations. 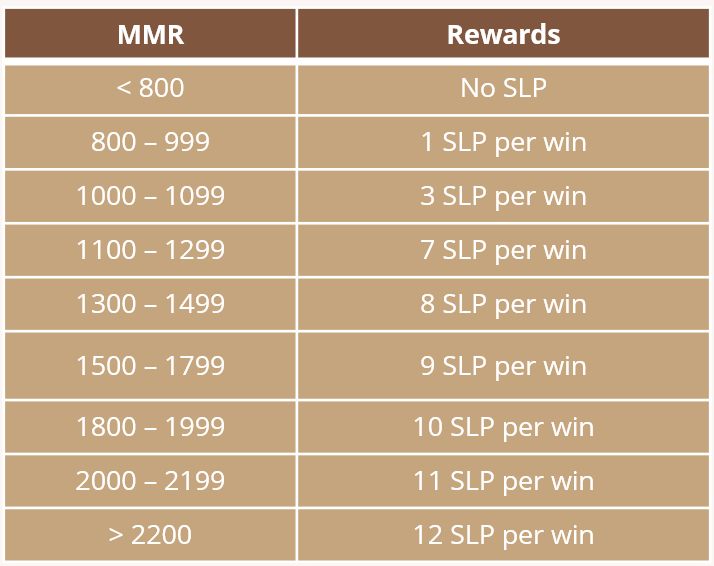 Regardless of your MMR, you can still complete your daily quest if you win five matches (even by winning without energy!) So, don’t give up if you keep losing in Arena Mode. Strategize all of your energy for Adventure Mode, then come back for five wins in the Arena. 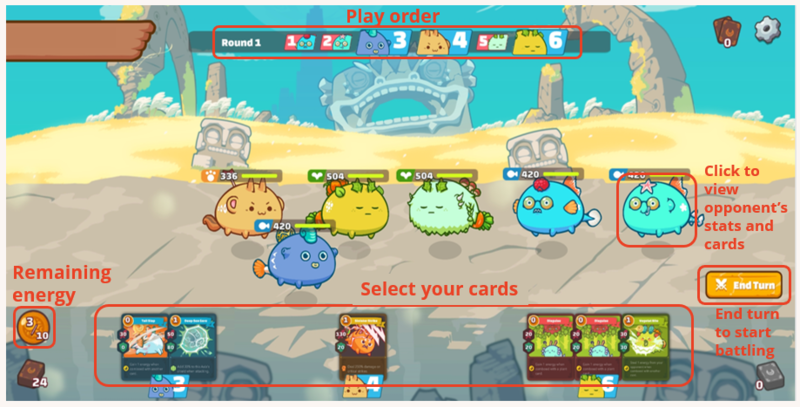 Before deciding your moves, it is recommended to strategize your tactics by analyzing the play order and your opponent’s ability.  The play order is located above the screen which determines which Axies move first. You can also view your opponents’ stats and cards by clicking on their Axies.

Once you select your cards, click “End Turn” to start battling. 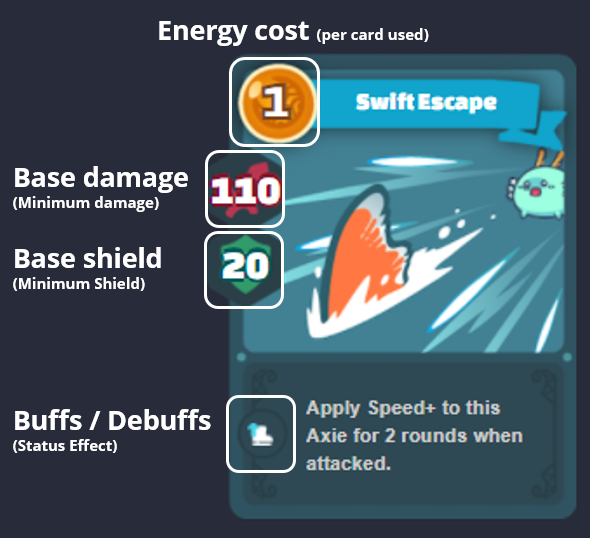 Another thing to note is that each card requires a different amount of energy cost, so it is important to do the math if you want to save up some of the energy for the next round!

Buffs and debuffs are the status effect that will be applied to either your opponent or yourself. It will be explained further in the Buffs & Debuffs section.

To win PvP matches constantly, it is important to understand how Axies’ class types can impact your odds of winning.

Axie Infinity has released a total of 9 Axie classes as of July 2021. 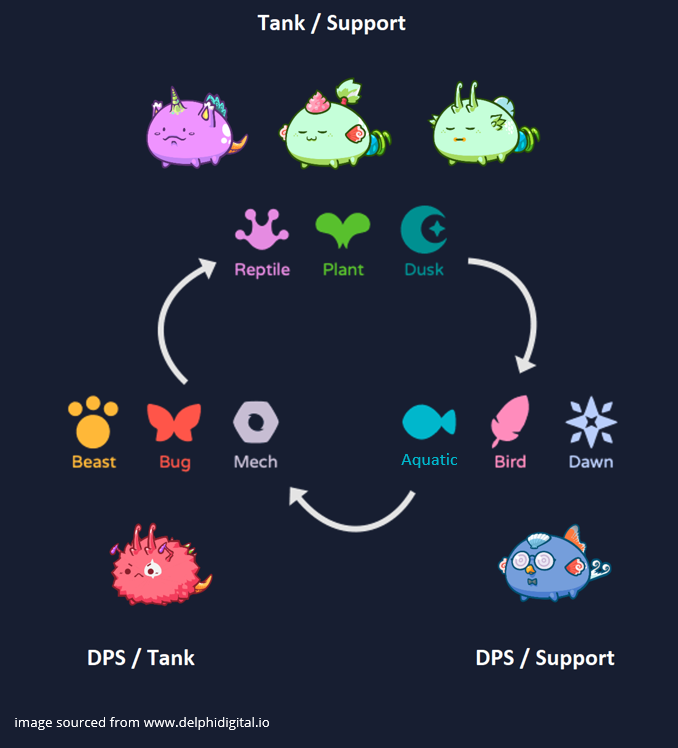 Furthermore, when an Axie uses a card from its own class, it gets an extra 10% attack and shield bonus.

Body Parts & Cards: An Axie has 6 body parts that are decided by its genes: back, ears, eyes, horns, mouth, and tail. Each body part represents a skill card of the Axie except the eyes and ears which do not provide the Axie with a skill card.

Attributes: Each Axie has 4 stats: Health, Morale, Skill and Speed.

Buffs & Debuffs: Status effects can be applied on Axies through playing skill cards. A positive effect is called a "Buff" while a negative one is called a "Debuff''. An icon will float above an Axie when a certain status effect is applied to it.

Currently, there are a total of 3 buffs and 13 debuffs in Axie Infinity: 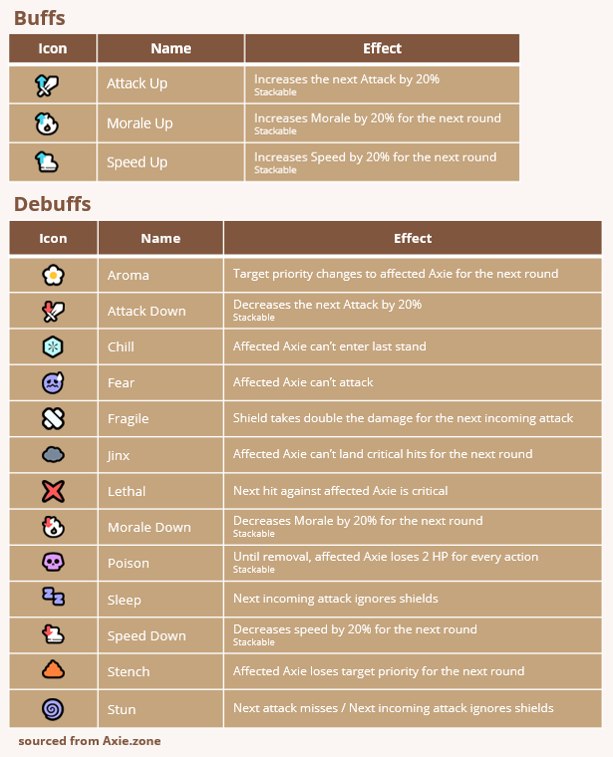 Much like Pokemon, Axies can be bred to create offspring, while the ancestry of every Axies is immutably recorded on the blockchain.

Breeding an Axie requires two resources: AXS and SLP tokens. Each Axie can be bred a maximum of 7 times.  At the time of writing, it costs 4 AXS and some SLP. The SLP cost depends on the breed count of both parents.

To breed, log in to the Axie Marketplace and click through My Account > Inventory. Next, select your Axie and click on “Breed”. Then, simply pair it with another Axie, review the costs, and start breeding. 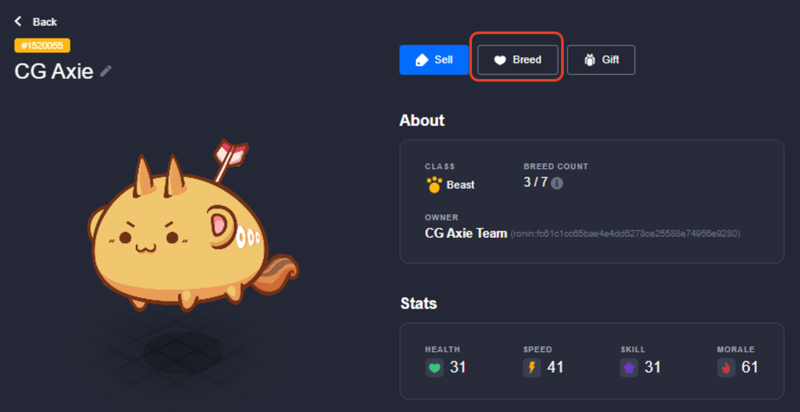 Axie takes 5 days to reach maturity. Subsequently, you can morph your Axie into an adult.

Axie breeding is a complicated process, and each decision needs to be carefully thought out to design a well-balanced team. Specially-bred Axies are essential, especially if you want to climb to the top ranks in the Arena (PvP).

We hope this guide provides you with a basic understanding of how to strategize your gameplay and maximize your profits on Axie Infinity. It takes a lot of effort, dedication, and experience to master Axie Infinity, so don’t give up yet if you fail at first. Follow us for more advanced Axie Infinity guide!

Yi Hong is a market research intern at CoinGecko. He is a finance student who is learning more about blockchain technology.

The crypto market is still reeling from the spectacular downfall of LUNA and UST, but how has GameFi fared in these trying times? Read on to find out!

Cryptocurrency games and the concept of play to earn have been on the rise. Here are some of the best blockchain games to help you earn while having fun!