What was the highest price for 0x?

What was the lowest price for 0x?

What was the 24 hour trading volume of 0x?

Where can 0x be traded?

ZRX is the governance token for the 0x protocol. ZRX holders have the authority to influence the direction of the protocol by voting on proposals.

0x is a protocol that aims to facilitate a frictionless peer-to-peer exchange of Ethereum-based assets. 0x is considered a non-custodial solution because funds are deposited or withdrawn from the user's wallet. It aggregates liquidity pools from different projects that are built on top of 0x for smoother peer-to-peer transactions.

Also, it behaves as the building block for developers that are looking for exchange functionality. 0x allows easy integration for developers through its relayers which adds exchange functionality on top of an existing product. 0x’s vision is to enable a direct, non-custodial wallet-to-wallet trading of any ERC-20 tokens on any Ethereum based platforms.

0x allows order makers to securely initiate a transaction with digital signatures and an 0x order is only considered valid after it has met all of the steps shown in the image below.

In order for a trade to occur, there needs to be someone on the other side of the trade. If the maker already has a desired counter-party, they could directly send the 0x order to them. Otherwise, the order will be sent to a relayer in hopes of finding a counter-party.

A relayer is an entity that helps to create, find, and fill 0x orders. Anyone can build a 0x relayer and begin earning fees for every trade it facilitates

Once someone finds and fills the 0x order, the 0x protocol’s settlement logic will verify the maker’s digital signature and make sure the conditions of the trade are completely met. If everything is in order, tokens will be automatically swapped between maker and taker. Otherwise, the request will be rejected.

Because 0x supports ERC-721 non-fungible tokens (NFT) as well, there could be a viable use case for gaming or digital artwork scenarios. Gamers can tokenize their in-game assets and trade among themselves. Artists can also digitize their artwork into a NFT and turn it into a trading product. 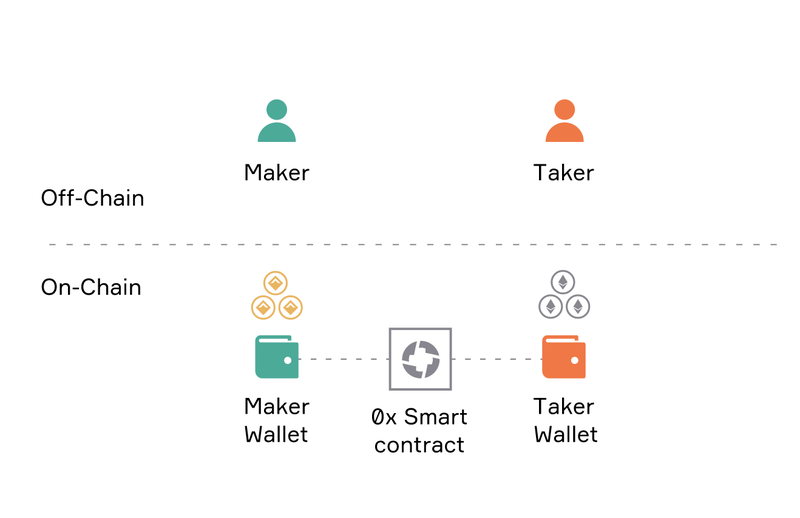 Unlike other decentralized exchanges, 0x does not store its orders on the blockchain. Instead orders are stored off-chain and trade settlements are only taken place on-chain. By taking transactions off-chain, there will be less congestion within the network and it would demand lower gas cost to operate within the 0x ecosystem.

The only part where the transaction occurs on-chain is the actual value transfer.

What can I do with ZRX?

Users can stake ZRX tokens with the staking pools available in the ZRX Portal and start earning ETH as rewards. If users are unsure about which staking pool to stake with, they can refer to the staking wizard for an easier process.

How do I get ZRX?

Users can purchase ZRX from centralized and decentralized exchanges such as Uniswap, Coinbase and OKEx.