Portfolio
Portfolio New Beam (beta) Price Alert Login and Security Developer's Dashboard Subscription Sign Out
Login Sign Up
Search
Give Feedback
Price alert successfully saved!
Open our mobile app to receive alerts on the go 🙌
Tokenomics data for this coin is currently unavailable.
Please send us a request for coins you would like to see Tokenomics data on. The Gecko team will try their best to curate the data!
In the meantime, check out some other coins that currently do have Tokenomics data here!
Rank #115

What was the highest price for Curve DAO?

What was the lowest price for Curve DAO?

What was the 24 hour trading volume of Curve DAO?

Where can Curve DAO be traded?

CRV is the governance token for Curve Finance. It implemented a complex time-based staking system to exchange CRV into veCRV, where veCRV is an internal token intended for governance purpose and has a right to claim the cash flows generated by the protocol.

Curve Finance conducted one of the biggest retroactive token airdrops on 14 August 2020 to reward early users, with a vesting period up to 4 years. It intends to have yield farming for all of its pool, with the reward weightage voted by the veCRV holders.

Yield Farming refers to the activity of depositing and locking capital in a DeFi Protocol for the reward of the protocol’s native tokens. DeFi protocols need to bootstrap capital to provide liquidity for exchanges, lend to borrowers, underwrite insurance risk, etc. It acts as an incentive to attract users to use the protocol while generating hype, giving out part of its native tokens.

Yield farmers will have to constantly monitor their veCRV power to get the maximum payout from the yield farming exercise as veCRV decays with time. There is a calculator built that shows this in detail. For further information do refer to the official documentation.

How to obtain CRV?

CRV can be obtained by buying them from exchanges such as Sushiswap or Binance. You can find CRV trading on various centralized and decentralized cryptocurrency exchanges.

What is Curve Finance?

Similar to Uniswap, Curve Finance is an Automated Market Maker (AMM) based Decentralised Exchange (DEX). Unlike Uniswap, its main focus is only to swap between assets that are supposed to have the same value. This is useful in the DeFi ecosystem as there are plenty of wrapped tokens and synthetic tokens that aim to mimic the price of the real underlying asset.

For example, one of the biggest pools is 3CRV, which is a stablecoin pool consisting of DAI, USDT, and USDC. Their ratio in the pool will be based on the supply and demand of the market. Depositing a coin with a lesser ratio will yield the user a higher percentage of the pool. As such when the ratio is heavily tilted to one of the coins, it may serve as a good chance to arbitrage.

Curve Finance also supports yield-bearing tokens. For example, it collaborated with Yearn Finance to release yUSD pools that consisted of yDAI, yUSDT, yUSDC and yTUSD. Users that participated in this pool will not only have yield from the underlying yield-bearing tokens, but also the swap fees generated by the Curve pool. Including the yield farming rewards in terms of CRV tokens, liquidity providers of the pool actually have three sources of yield.

To promote the liquidity of more obscure tokens, Curve introduced the concept of base and meta pools. Metapools allow for one token to seemingly trade with another underlying base pool. This means we could create for example the following pool: [GUSD, [3CRV]].

In this example users could seamlessly trade GUSD between the three coins in the 3CRV (DAI/USDC/USDT). This is helpful in multiple ways:


The Metapool in question would take GUSD and 3CRV LP tokens. This means that liquidity providers of the 3CRV pool who do not provide liquidity in the GUSD Metapool are shielded from systemic risks from the Metapool.

The similar base pool for BTC is sBTC Curve, consisting of wBTC, renBTC and sBTC.

What is the pool factory?

In collaboration with Yearn Finance, Curve has developed a pool factory, a way for anyone to deploy a Curve Metapool with the 3CRV or sBTC Pool.

Before this, only the Curve DAO can deploy a new pool. Now, anyone can deploy a pool for stable or algo coins as well as a tokenized Bitcoin in a few clicks.

There are a few parameters to be set:


Pools created through pool factory has a few characteristics:


Other than USD and BTC, are other assets supported?

Curve Finance just launched the ETH and EUR pools, with support for more assets in the development pipeline.

What are the benefits of providing liquidity to Curve pools?

As an example, let's look at stETH pool that provides four sources of yield. 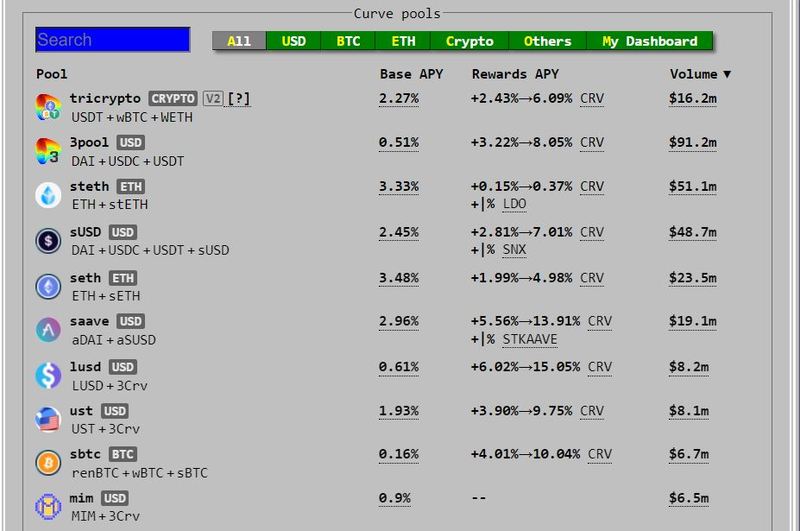 This can be viewed at the main page of Curve Finance. Looking at the Annual Percentage Yield (APY) figures, it shows that the Liquidity Providers (LPs) can roughly expect


As of January 2021, the total yield would be in the range of 49%-57% APY. The exact APY hinges on the weekly gauge weight votes, veCRV boost, and the LDO rewards that are expected to only last for 1 month starting from 13 Jan 2021.

The LDO and CRV tokens will have to be manually claimed and sold to ETH if the users only want to increase their ETH holdings, as such, it is simpler to use yield farming aggregators such as Yearn Finance that can do that automatically.

How to provide liquidity to Curve pools?

Using the same example as above, after clicking the pool and going to the deposit tab, users are able to see the information about the selected pool. 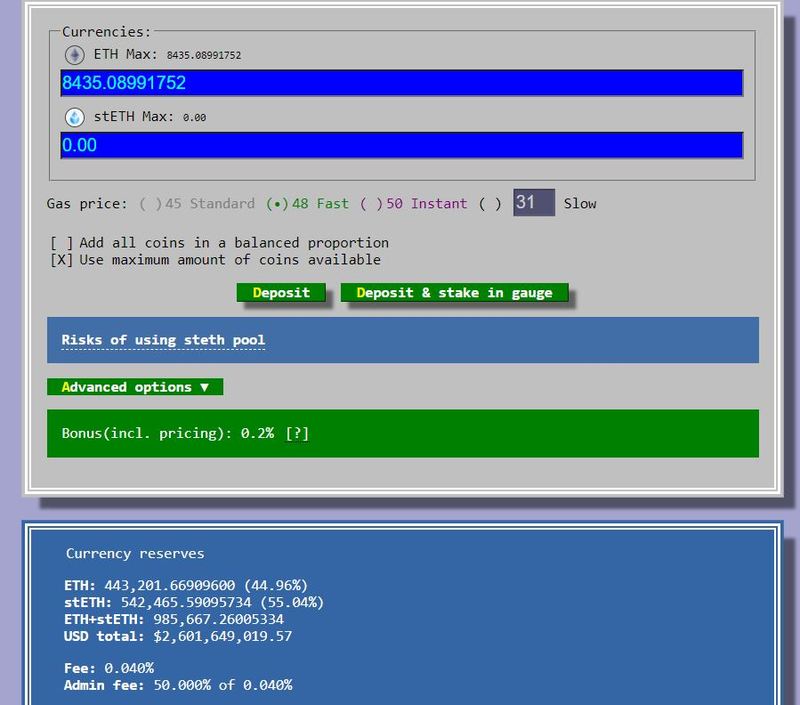 If users want to avoid any bonus or slippage in pricing, choose the ‘Add all coins in a balanced proportion’ option.

What is gauge weight?

Gauge weight refers to the daily CRV rewards a pool receives. The following graph can be found at the “Gauge weight vote” tab under the Curve DAO. 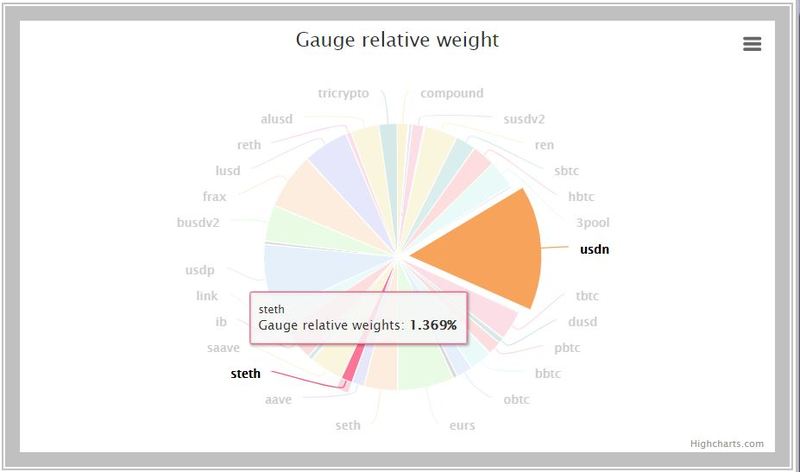 From the graph we can see that the stETH pool is only expected to have 1.37% of the daily CRV rewards. The weights shown above are the voting result by the veCRV holders conducted every week.

How to maximise the APY through vote locking veCRV?

Using the same stETH vault above, let's look at how to maximise the CRV rewards from the yield farming activity. A certain amount of veCRV is required to boost the CRV rewards up to max 2.5x. Below is the interface of the calculator. 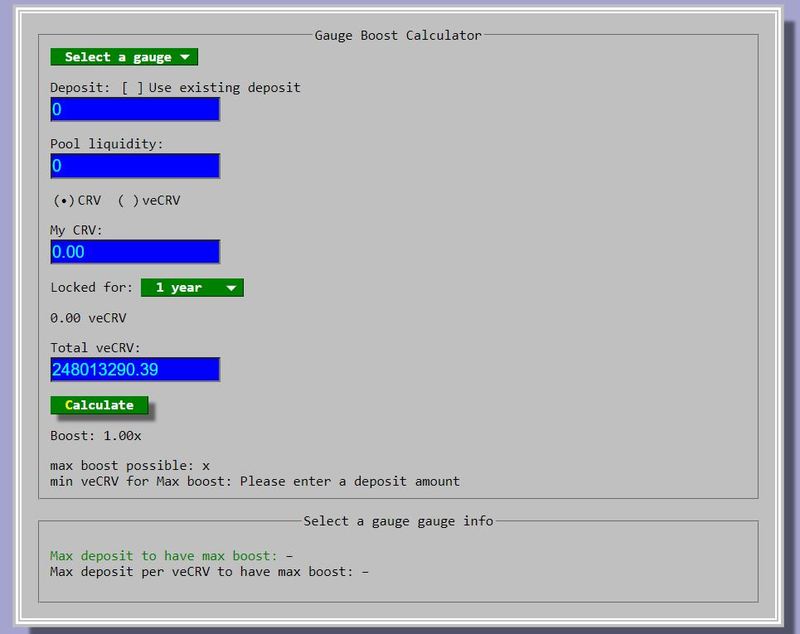 From the picture above it can be seen that locking 1000 CRV for two years will yield 500 veCRV and is expected to have a 1.99x boost on 1 ETH worth of assets in the stETH pool. If users already have assets in the pool, click the “Use existing deposit” option.

The voting power applies to all pools the users have but may produce different boosts based on how much liquidity users are providing and how much total liquidity the pool has. veCRV decreases over time but the boost will only be updated at certain checkpoints like withdrawing, depositing into a pool, or claiming CRV rewards. Constant monitoring is required to maintain max boost.

What are the fees to use Curve Finance?

Most swaps on Curve cost 0.04% in fees. 50% of the fees go to veCRV holders and 50% of the fees go to Liquidity Providers (LPs). Pools that are launched through the pool factory can support up to 1% in fees. For up to date information, go to the deposit page of the selected pool like shown above where the total fee and admin fee (fees earned by veCRV holders) are shown.