What was the highest price for UMA?

What was the lowest price for UMA?

What was the 24 hour trading volume of UMA?

Where can UMA be traded?

UMA is an infrastructure that lets users deploy and trade synthetic assets on Ethereum with minimal use of an on-chain price feed (See oracle). UMA positioned itself as the “priceless” derivatives platform and relied on a system of economic incentives.

What do you mean by a “Priceless” derivative platform?

UMA calls itself a “Priceless” derivative platform because they believe that oracles’ current usage is fragile.

The inherent composability and interoperability within the Decentralized Finance (DeFi) space can act as a double-edged sword.  The fragility of the oracles could lead to a domino effect affecting the whole ecosystem. This has been seen with the recent Compound oracle issue.

Hence, UMA aims to ensure the counterparties properly do collateralization without using an on-chain price feed.

Fun Fact: UMA is the abbreviation of Universal Market Access - as it strives to break the barriers to entry for retail to enter into the derivatives market.

A brief history of UMA

In April 2020, UMA hosted its first-ever initial decentralized exchange offering (IDO) on Uniswap. The UMA token’s initial listing price was at ~$0.26, and 2% out of 100 million supply was made available during its IDO round.

How does the UMA platform work?

To understand how UMA works, we will look at its core components and the infrastructure's actors.


And there are three actors on UMA’s infrastructure:

It is designed with mechanisms to incentivize the token sponsors to properly collateralize their positions without requiring any oracle usage, including a liquidation and dispute process for undercollateralized positions.

For a new type of synthetic asset that has yet to exist in the market, the token needs to be parameterized and deployed. Here are some key parameters:


To understand in detail how to mint a synthetic token on UMA, you can refer to the tutorial here.

Data Verification Mechanisms (DVM) is an oracle service complementary to the “Priceless” Financial Contract. It is used to resolve disputes of liquidations and settling the synthetic token contracts upon expiration.

At any time, liquidators can choose to liquidate positions that they believe are improperly collateralized (based on their own off-chain price index reference). They can do so by posting a liquidator bond to the synthetic asset contract.

If a disputer thinks the liquidation is invalid, he can submit a price request to DVM for UMA token holders to vote to determine the asset price at the specific timestamp.

The votes can be done via UMA Improvement Proposals (UMIPs) and vote on UMA’s Voter dApp. At the same time, the disputers will post their disputer’s bond to the contract as well.

The DVM will count the votes to determine the final price of the asset for the given timestamp. 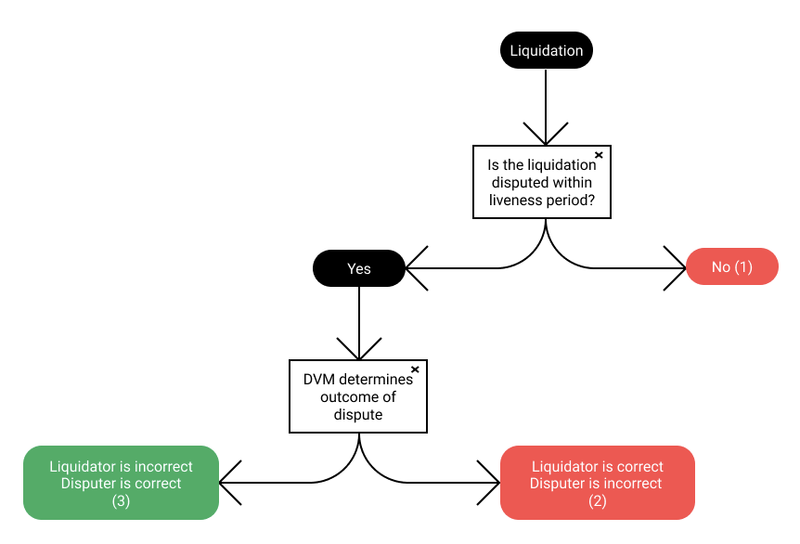 Conversely, if the disputer is incorrect, he will lose his disputer’s bond to the liquidator. Additionally, the liquidator will earn the token sponsor’s collateral, and his liquidator bond will be refunded.

Note that DVM requires up to 4 days to respond to a price request, and hence it is not intended as an on-chain price feed. It serves as the court-house to resolve dispute and liquidation related-matters.

Do synthetic tokens on UMA have an expiry date?

Yes. The token “expires” on this date is within the token name, such as yUSD-SEP20, which expires on September 1st, 2020.

However, based on UMA’s roadmap, they are currently building a perpetual synthetic contract this year (2021).

What can you do with a UMA token?

UMA token’s primary use is governance, especially in operating UMA’s optimistic oracle (DVM) and the direction on UMA’s protocol.

As UMA token holder, you can earn rewards via two ways: (1) voting on price requests from financial contracts and (2) voting on UMA system upgrades, including parameter changes.

Voters who participate in the price requests from financial contracts and governance could earn an inflationary reward (0.05% of total supply and prorated based on the amount they staked (voted)).

Are there any projects building synthetic assets on UMA?

At the time of writing (8th February 2021), there are nine projects currently using UMA to build synthetic assets. One of the latest projects (December 2020) is the collaboration between UMA and YAM, creating a synthetic token called uGAS - which tracks the cost of gas on Ethereum.

You can find a full list of projects here.

What are the differences between UMA vs. SNX?

Synthetix Network Token’s protocol relies on Chainlink as its price oracle to power its synthetic assets. UMA meanwhile uses a system of economic incentives instead to ensure that data is not corrupted.

Another critical difference is that users can buy or sell synthetic assets minted on UMA on secondary markets such as Uniswap. Synthetic assets on SNX, however, can only be bought and sold within its own exchange ecosystem.

Has UMA been audited?

Yes, the contracts in the financial-templates have been audited by OpenZeppelin. The audit report can be found here.

Can I long or short UMA?

Yes, you can open a long or short position on UMA perpetual contracts, though only on a limited number of derivative exchanges: Stormgain Futures and OKEx.

Note that derivative contracts and tokens are high-risk products. You might want to understand what you are doing before participating in them.