Portfolio
Portfolio New Beam (beta) Price Alert Login and Security Developer's Dashboard Subscription Sign Out
Login Sign Up
Search
Give Feedback
Price alert successfully saved!
Open our mobile app to receive alerts on the go 🙌
Total supply has changed from 10m to 5m. More information can be found on https://wing.finance/vote?anchor=wip08
Tokenomics data for this coin is currently unavailable.
Please send us a request for coins you would like to see Tokenomics data on. The Gecko team will try their best to curate the data!
In the meantime, check out some other coins that currently do have Tokenomics data here!
Rank #602

Wing Finance price today is $9.11 with a 24-hour trading volume of $6,157,412. WING price is up 2.1% in the last 24 hours. It has a circulating supply of 2.9 Million WING coins and a total supply of 3.99 Million. If you are looking to buy or sell Wing Finance, Binance is currently the most active exchange.

What was the highest price for Wing Finance?

What was the lowest price for Wing Finance?

What was the 24 hour trading volume of Wing Finance?

Where can Wing Finance be traded?

What is Wing Finance?

Wing Finance is a decentralized finance (DeFi) platform built by the team behind Ontology that supports cross-chain interactions between various protocols. The Wing team created an innovative credit valuation method designed to support its credit-based lending and to increase transparency. The project aims to create a fair and synergistic relationship between borrowers, creditors, and guarantors through decentralized governance and its own risk control mechanism – which opens doors to a larger range of DeFi projects accessible and implemented on the platform.  Wing is a decentralized autonomous organization (DAO) that allows users to participate in decision-making, product design, and operations.

How does Wing work?

Though lending in DeFi is rampant, it is not as accessible to many as it was meant to be. Despite the openness and permissionless nature of platforms, over-collateralization requirements have restricted the ability to make loans to borrowers because borrowers needed to own a ton of digital assets in the first place. Essentially, Wing was created to solve the issue of over-collateralization that pervades the DeFi industry – to engender an inclusive ecosystem.

OScore’s credit scoring mechanism examines the user’s balance and lending/borrowing history. It is able to support Bitcoin, Ethereum, and Ontology blockchain and automatically generates a quantifiable credit score for a user. So, since borrowers have to rely on their OScore data for loans, the collateral needed is lowered. Thus, Wing improves trust, transparency, and security within its own platform, and also taking the DeFi industry a step up.

As such, it is a credit-based DeFi platform that is able to support cross-chain interaction across the asset lending market. There are several functions in Wing:


Activities such as depositing, withdrawing, borrowing, repaying, insuring, surrendering, and other contracts on the Wing platform will cost 1-5 Ontology Gas (ONG) in handling fees, which ultimately depends on the complexity of the contract performed.

WING is the native token for Wing Finance. It serves three purposes:

WING can be purchased on exchanges such as Binance and OKEx. 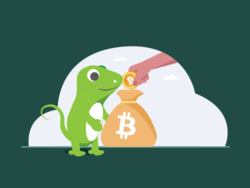