Portfolio
Portfolio New Beam (beta) Price Alert Login and Security Developer's Dashboard Subscription Sign Out
Login Sign Up
Search
Give Feedback
Price alert successfully saved!
Open our mobile app to receive alerts on the go 🙌
ARMOR had rebranded to EASE, kindly refer to this post for more information.
Tokenomics data for this coin is currently unavailable.
Please send us a request for coins you would like to see Tokenomics data on. The Gecko team will try their best to curate the data!
In the meantime, check out some other coins that currently do have Tokenomics data here!
Rank #1718

What was the highest price for ARMOR?

What was the lowest price for ARMOR?

What was the 24 hour trading volume of ARMOR?

Where can ARMOR be traded?

ARMOR is the governance token for Armor protocol.

How to obtain ARMOR?

ARMOR can be purchased from exchanges such as Uniswap or Sushiswap. You can find ARMOR trading on various centralized and decentralized cryptocurrency exchanges. 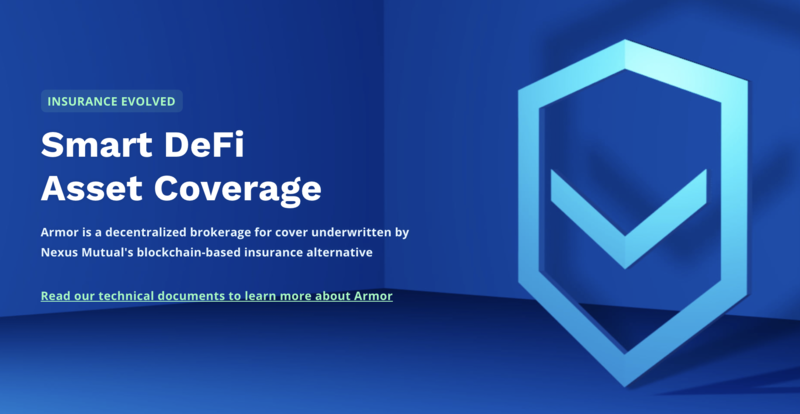 Armor is the first insurance aggregator for DeFi. Leveraging the underwriting capability of Nexus Mutual, it offers pay-as-you-go insurance products and the ability to buy insurance covers without KYC.

Wrapped NXM (wNXM) was created to allow investors to have exposure to NXM without having to do KYC. However, as more wNXM were created, less NXM became available for internal functions of the mutual such as staking, claim assessment, and governance voting.

arNXM was created by Armor to solve this issue while still allowing investors to participate in Nexus Mutual’s operations without having to do KYC.

To get arNXM, users can stake wNXM in Armor. The wNXM is unwrapped by Armor and the NXM token is then subsequently staked on smart contracts on Nexus Mutual. By staking on Nexus Mutual, stakers signal that the smart contracts are safe and are thus paid a premium and this opens up more insurance covers for sale.

To ensure there is sufficient liquidity to exchange between arNXM and wNXM, 10% of the wNXM are not unwrapped. This 10% liquidity will only be refilled every 3 days.

arNXM can be referred to as a wNXM vault, where users deposit wNXM into the vault and can expect to receive a higher amount of wNXM in the future.

arNFT is the tokenized form of insurance cover purchased on Nexus Mutual. arNFTs allow users to buy insurance cover without having to do KYC. Since these insurance covers are tokenized as non-fungible tokens, users are now able to transfer them to other users or sell them on the secondary market. These tokenized covers also allow for further DeFi composability.

arNFTs can be minted for all protocols for which Nexus Mutual coverage is available.

arCORE is a pay-as-you-go insurance product, where Armor tracks the exact amount of user funds as they dynamically move across various protocols, and bills by the second using a streamed payment system. Underlying arCORE are pooled arNFTs that are broken down and sold at a premium. This allows for much more innovative product design and showcases the great composability of the DeFi ecosystem.

To compensate arNFT stakers for taking the risk of not fully selling out the cover, arCORE’s products are charged at a higher premium. Currently the multiplier is 161.8%, meaning the price would be 61.8% higher instead of purchasing directly from Nexus Mutual.

For the additional premium, 95% is given back to arNFT stakers, 2.5% is charged by Armor as an admin fee, and 2.5% is reserved for referral fee. At a 1.618 premium multiplier and 95% share of revenue, utilization would have to be greater than 65% for this to be profitable for arNFT stakers. This means that if the covers sold are less than 65% of those staked in the pool, then the stakers will have to foot the costs themselves.

arSHIELD is an insured storage vault for Liquidity Providers (LP) tokens where insurance premiums are automatically deducted from the LP fees earned. This essentially creates insured LP tokens where no upfront payments are required from the user.

arSHIELD only covers the protocol risk of the liquidity pools. For example, insured Uniswap LP tokens only cover the risk of Uniswap’s smart contract getting compromised, but not the risks of the underlying assets (e.g. hack of underlying asset protocol).

As such, arSHIELD is just a repackaged version of arCore. arSHIELD is offered in two versions with differing risk levels, similar to how fixed interest rate products are designed in tranches.


Shield+ Vaults are the safest risk tranche, where claim payouts are guaranteed as it is fully collateralized but cover capacity is limited. It has a higher premium multiplier of 200%, making it two times more expensive than Shield Vault.


Shield Vaults are the higher risk tranche, where claim payouts may not be fully reimbursed, as it depends on the available capital in the pool during the time of hack. To compensate for the extra risks, it only has a premium multiplier of 100%, meaning it is the same price as directly buying from the Nexus Mutual itself. Cover capacity is designed to be unlimited so users will have to be comfortable with the collateralization ratio as it might not be fully collateralized.

How to claim from Armor?

After a user files a claim, a review process will be triggered and submitted to Nexus Mutual for consideration. Armor token holders will also be able to participate in Nexus Mutual’s process for claim approvals and payouts using arNXM. If a payout is confirmed, the amount will be sent to Armor’s payout treasury before being distributed to the affected users.

What are the fees to use Armor?

Below is the profit sharing fees table updated as at January 2021.

One thing to note is that for every cover bought from Nexus Mutual, 10% of the premium is reserved for claim purposes, where the claim fees is 5% of the premium. This means that every user can claim twice with the same policy. If there are no claims at the end of the policy period, the 10% premium will be refunded. This is where the arNFT’s profit comes from.

A deep dive into decentralized insurance