Axie Infinity has recently exploded onto the global stage with its novel play-to-earn gameplay design. Players from all around the world can face off in its Arena, or march off on Adventures to explore the Lunacia Ruins.

Despite the amount of attention it has garnered, there are still many mysteries surrounding the game. Who forked out 300 ETH to buy the most expensive Axie in history? Why did I get 0 SLP from my glorious Arena win? What happens when 2 Axies of the same speed face off?

We aim to answer all of these burning questions in this article.

1. Secrets of the secret classes

Dusk, Dawn, and Mech are the three “Secret Classes” in Axie Infinity. Secret class Axies are hard to breed, and there are no secret class cards. This is a disadvantage because when an Axie uses a card from its own class, it gets an extra 10% attack and shield bonus.

But wait, that just means secret classes are considerably weaker compared to the others with class bonuses right? Yes and no.

Secret class Axie can still benefit from class advantage and card bonus, but only at 7.5%. This might be good for niche, balanced cross-class builds depending on playstyle preference. 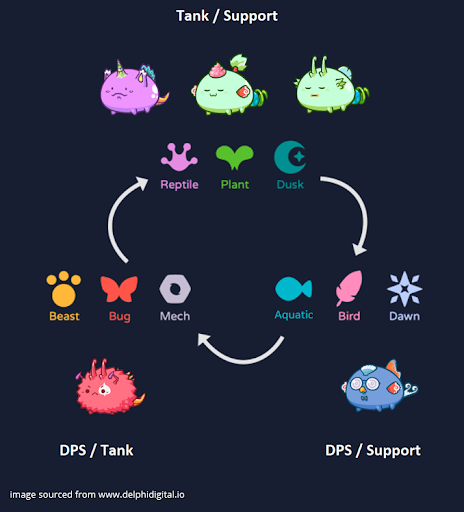 In terms of class advantage, secret classes share the same advantages and disadvantages as the classes they enjoy the card bonus from. For example, Dusk which gains a 7.5% class bonus from playing Reptile and Plant cards, also gains additional 15% damage against Aquas Birds and Dawns - just as Reptiles and Plants would.

Also, there are rumors brewing that Mech, Dusk, and Dawn classes might be getting their own moves in the future, but it is still not known when or what those will be yet.

Aside from the standard SLP rewards, one-time treasures also await those who defeat the bosses at certain levels. Fair warning to those who want to brave the ruins – the bosses are notoriously difficult, hence research and preparation are highly advised before any attempts.

Snapshot of Ruin #21 Boss Fight from a YouTube guide

3. Dominating Arena? Not so fast…

Ever had an Arena game sooooo good that you beat your opponent in 5 rounds or fewer? You think, “Sweet, I wonder if they reward such magnificent feats with extra SLP”, only to be transported to the main screen immediately and unceremoniously – SLP reward screen nowhere to be found.

“Excuse me? Where’s the reward for annihilating my opponent?”

It turns out that winning too quickly (before round 5) in PVP will yield players a grand total of 0 SLP. This is a measure put in place to discourage win-trading strategies.

So next time you find yourself winning too quickly, hold your horses back a little, at least until AFTER round 5.

We know that faster Axies (i.e. higher speed) will get to move first – but what happens when 2 or more Axies share the same speed? Spoiler alert: it is not a 50:50 coin toss.

In that case, turn order is then determined by comparison of the following stats in sequence:

In a face-off, since both Axies share the same Speed and HP, the Mech Axie will strike first because it has higher Skill.

All else being equal, including breed count and genes, Axies with lower IDs should fetch a higher price – a tip for all of you aspiring Axie arbitrageurs/appraisers out there *wink wink*

5. Origin of the Origins

If you have ever wondered what is the lowest Axie ID available for purchase, we have got you covered:

This adorable little Beast Axie, aptly named 🏆, is one of the Origin Axies. Origin Axies occupy most of the lowest Axie IDs, and are the first of their kind in the Axie Universe.

Back in April 2018 when Axie Infinity was first launched, Origins Axies went on sale for an average of 0.22 ETH. Axie Origin Coins (AOC) were also given out if someone bought an Axie using your referral, and these AOCs could then be redeemed at a 5-to-1 ratio for Origin Axies.

So what is so special about these Axies? Not only do Origins come with a special tag, they will also perform a special victory pose flex when they win in the Arena.

There can only ever be 4088 Origin Axies in total. As of today, there are 3,291 Origins. Some Origins have not yet been redeemed (and some will never be) since there are still unspent AOCs out there.

With the #5 Axie ID, 🏆 has the current honor of having the lowest Axie ID on the Ronin marketplace. Should you ever come across a 1-vs-1-whoever-strikes-first-wins-it-all situation between 🏆 and Axie #30979, you know whom to put your money on…

But what about its cousins #1 - #4? Our guess is that these Origin Axies likely still reside in the land of Ethereum across the bridge, biding their time to make an appearance in Ronin.

6. Who bought the most expensive Axie ever sold? 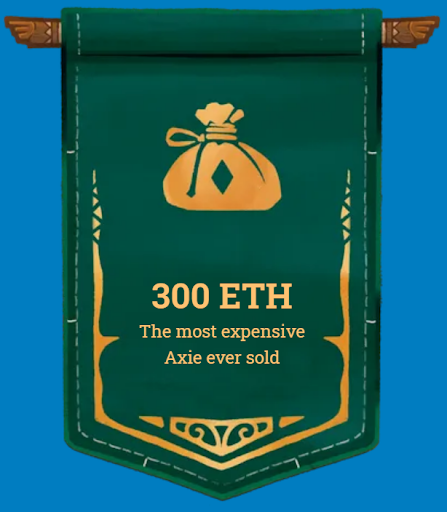 The image above should be a familiar sight to Axie enthusiasts. We know that the most expensive Axie was sold for 300 ETH, but…who bought it?

According to an interview by CoinDesk Chinese, the mysterious buyer was a Harvard University student from Beijing, China. The student, Andy, had started investing in cryptocurrency since 2017 with the start-up funds granted by his parents. He had come to learn about Axie Infinity by chance and quickly cultivated an interest in the Pokemon-inspired game.

One thing led to another and as we already know, Andy would then purchase Angel (Axie #1046) for a record-breaking 300 ETH, forever etching himself in the tapestry of Axie Infinity’s history. 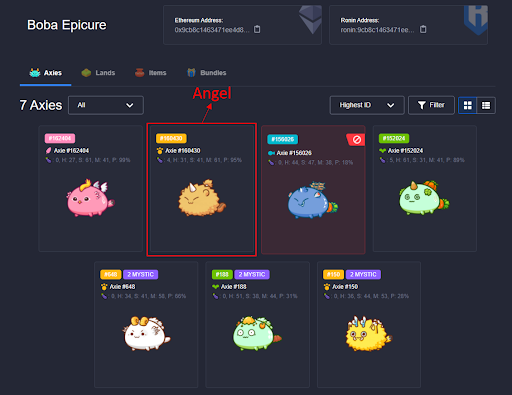 As of today, Andy (who also appears to be a Boba fan) owns 7 Axies in total, including the famed Angel!

7. The most expensive Axie Infinity land

Most Axie enthusiasts are familiar with the magic number of “300 ETH”, but not nearly as many of us know about “888.25 ETH” – the price of the most expensive digital land ever sold. 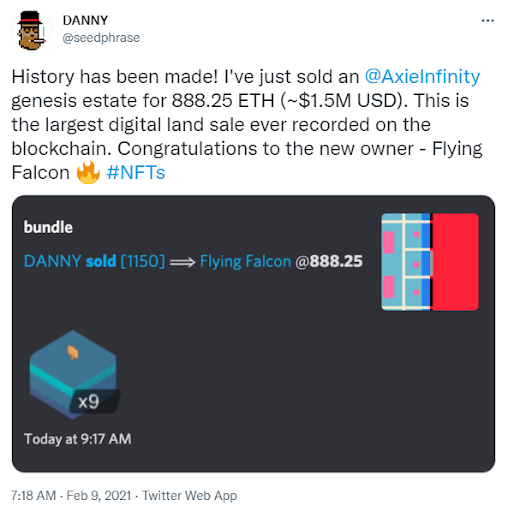 On 6 February, a user known simply as “DANNY” tweeted that he had just sold an Axie Infinity Genesis land for a whopping 888.25 ETH (~$1.5M USD). Genesis lands are extraordinarily rare (only 220 in total) and are located in the center of the Axie Infinity map. In the future, these will be the hosting areas for special content like Chimera Bosses and Raids.

Ready to show off your glorious drawing of Andy's Angel with your close circle of friends, family, and internet strangers? You might want to think again.

As of September 2020, Axie Infinity updated the terms of usage for their IP. This essentially allows Axie NFT owners and artists the right to create and monetize their fanart, provided that the following terms are met: 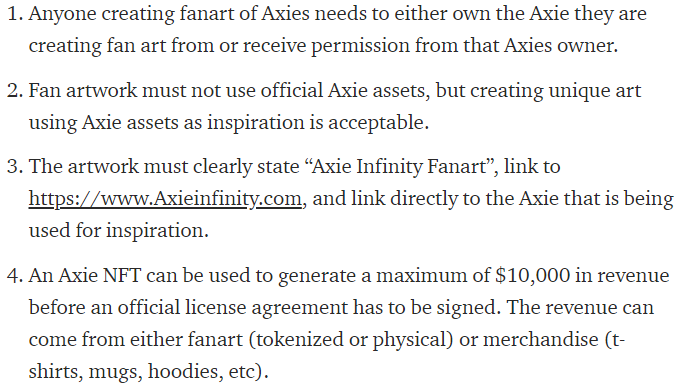 Artists who create original fanart without monetizing it are not required to own the Axies, although seeking consent from the Axie owner is still highly encouraged. Original creations here are defined as creations that do not use Axie Infinity’s existing assets. Below are the examples given: 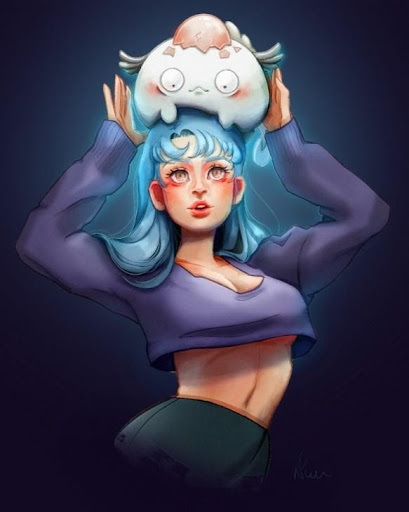 So here’s a gentle reminder to all the Axie artists out there to remember your “please and thank yous”.

We know for a fact that there is a positive correlation between Morale and Last Stand chance – the higher the Axie’s morale, the higher the chance of Last Stand being activated. We also know that your Axie will never enter Last Stand when you need it most, but believe it or not, this is actually more than just a game of chance.

As it turns out, there is a mathematical way to determine if your Axie will enter Last Stand: 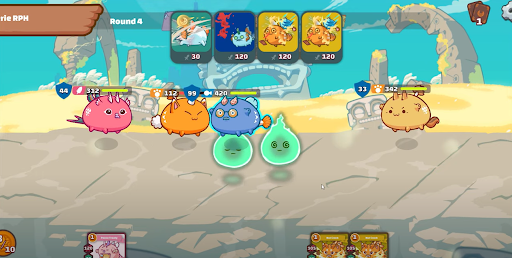 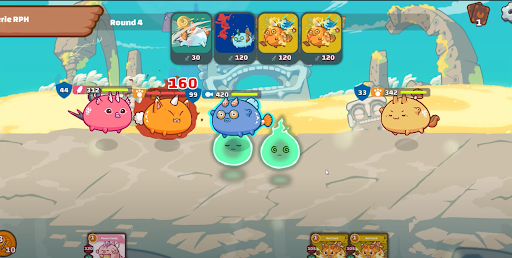 Based on the above, you would want to get opponent Axie down to as little remaining HP as possible before dealing the final blow, minimizing the chances of it entering Last Stand.

So no more finger-crossings for Last Stand miracles, only cold, hard factual math!

Note: On average, players will only have a microseconds window to calculate the above, and are advised to have at least some pen and paper ready.

Okay admittedly, this is actually one of the worst-kept secrets of Axie Infinity. But for the few of you who did not already know, there is a way to look at Axies’ genes beyond the 6 body parts. 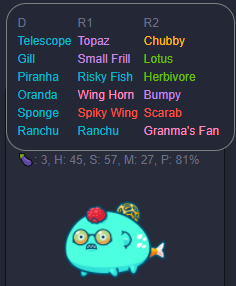 That pure Aqua you saw? Might not be so pure after all.

Thanks to Freak, we now have a Chrome/Brave browser extension that will grant us the power to view all of Axies’ dominant and recessive genes. The extension will also display the number of breeds, HP, speed, morale, and pending exp, making your shopping experience on the Axie Marketplace that much better. To view the hidden genes, simply hover over the Axie's stat line.

For those readers who consider #10 to be cheating (it is not) since it is arguably a universally known “secret” well documented in the Axie Whitepaper, here is a bonus you-did-not-know.

Fans of CoinGecko can rejoice knowing our beloved Gecko mascot is in Axie Infinity in the form of a majestic statue. 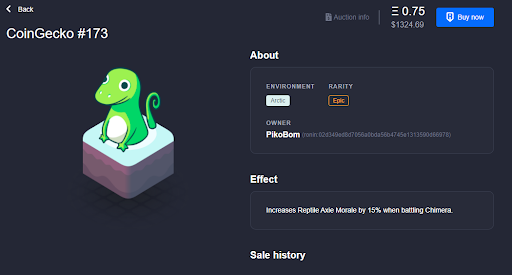 Not only is the statue a fabulous décor piece for Axie lands, but it also boosts morale by 15% for Reptile Axies when you are out battling those pesky Chimera. The floor price of this statue as of now is at 0.75 ETH.

And that wraps it up for 10 Things You Didn’t Know About Axie Infinity!

Which of the above facts did you already know? What other obscure Axie facts do you know that others might not? If you are eager to start your Axie adventure and would like some help with it, visit our Axie Scholarship guide.

Dillon is an Operations Associate at CoinGecko with a weakness for 3-digit APYs. As an ex-consultant, he now finds joy in laughing at consulting memes unironically.