Chainlink price today is $9.21 with a 24-hour trading volume of $446,465,251. LINK price is down -0.2% in the last 24 hours. It has a circulating supply of 470 Million LINK coins and a total supply of 1 Billion. If you are looking to buy or sell Chainlink, BingX is currently the most active exchange.

What was the highest price for Chainlink?

What was the lowest price for Chainlink?

What was the 24 hour trading volume of Chainlink?

Where can Chainlink be traded?

Chainlink is a framework for building Decentralized Oracle Networks (DONs) that bring real-world data onto blockchain networks, enabling the creation of hybrid smart contracts. These DONs provide decentralized services such as Price Feeds, Proof of Reserve, Verifiable Randomness, Keepers, and the ability to connect to any web API.

Chainlink oracle networks are blockchain-agnostic and are incentivized through the native LINK token, used for node payments and network collateral.

Watch a video to learn about Chainlink.

A brief history of Chainlink

The Chainlink Network went live on the Ethereum mainnet on June 1st, 2019 and has since expanded to support additional blockchains and layer 2 networks such as Polygon, BSC, Avalanche, Arbitrum, and more.

What is the purpose of Chainlink?

To understand the purpose and function of Chainlink, we will split it into two sections:

Before we dive into the function of the Chainlink Network, we need to understand the basics of smart contracts and how oracles work.

To overcome this problem, an additional piece of infrastructure is required known as an “oracle” which relays data from the real world onto blockchain networks, where it can be consumed by smart contracts.

The Chainlink Network addresses this issue through Decentralized Oracle Networks (DONs) that consist of a network of independent oracle node operators that fetch, aggregate, validate, and deliver real-world data on-chain. Each oracle node can specialize in providing different decentralized services on the behalf of smart contracts. 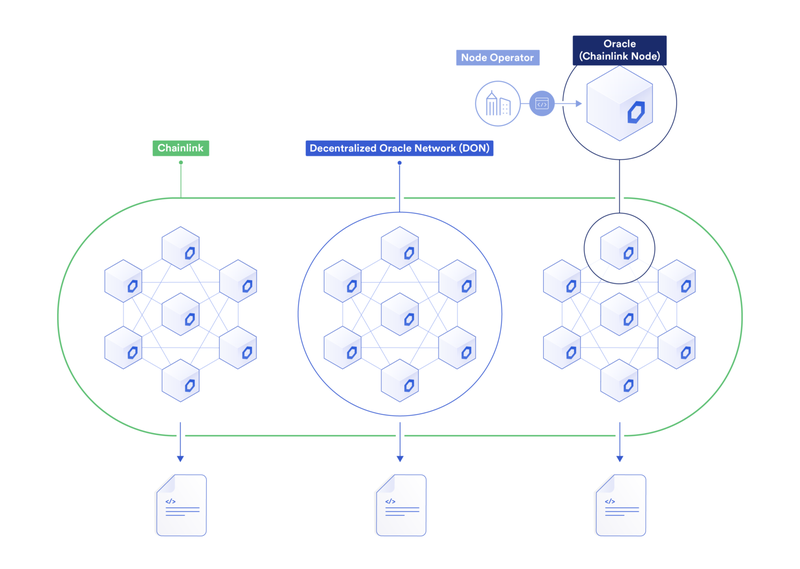 
The decentralized data model is powered by Chainlink nodes using the Off-Chain Reporting Protocol (OCR), where data is fetched and aggregated off-chain, before a single transaction is submitted on-chain containing each node’s signature and corresponding data point.

LINK is an ERC-677 token that is used to incentivize the proper operation of Chainlink DONs. The token has also been bridged across multiple blockchains to enable native Chainlink oracle integrations.

The LINK token is used within the Chainlink Network for the following components:

The most common use case includes securing Decentralized Finance (DeFi) protocols which require financial market data. The Chainlink Network offers a variety of on-chain data feeds that are used to secure tens of billions of dollars. Integrated applications include Aave, Compound, Synthetix, and more.