Portfolio
Portfolio New Beam (beta) Price Alert Login and Security Developer's Dashboard Subscription Sign Out
Login Sign Up
Search
Give Feedback
Price alert successfully saved!
Open our mobile app to receive alerts on the go 🙌
Tokenomics data for this coin is currently unavailable.
Please send us a request for coins you would like to see Tokenomics data on. The Gecko team will try their best to curate the data!
In the meantime, check out some other coins that currently do have Tokenomics data here!
Rank #2017

DIGG price today is $3,389.39 with a 24-hour trading volume of ?. It has a circulating supply of 250 DIGG coins and a total supply of 574. If you are looking to buy or sell DIGG, Uniswap (v2) is currently the most active exchange.

What was the highest price for DIGG?

What was the lowest price for DIGG?

Where can DIGG be traded? 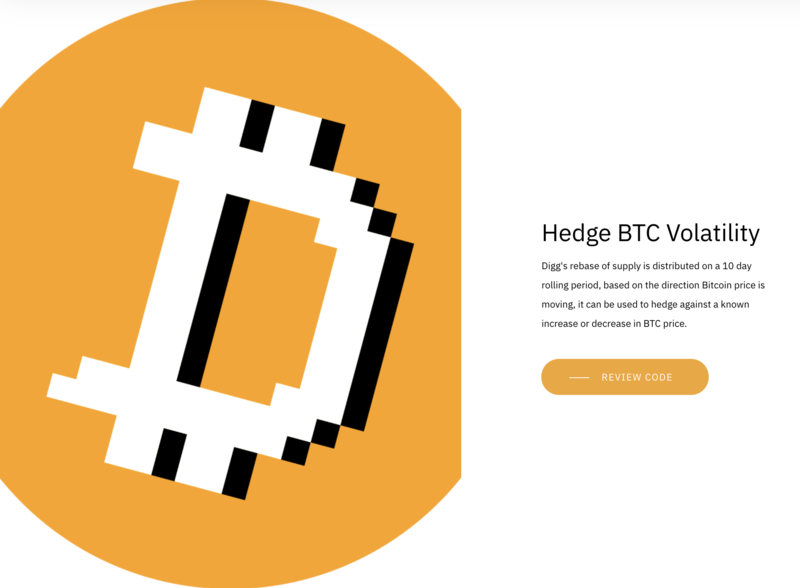 DIGG is the first elastic supply rebase token where its price is pegged to Bitcoin’s price. It is one of the products released by Badger Protocol.

How to obtain DIGG?

DIGG can be obtained by buying them from exchanges such as Uniswap or Sushiswap. You can find DIGG trading on various centralized and decentralized cryptocurrency exchanges.

What is a Rebase token?

The concept of rebase tokens is a bit abstract. Unlike normal currencies, rebase tokens aim to peg their price towards a target. To do so, rebase tokens change their supply dynamically, corresponding to market demand.

For example, if a user owns 1% of the total supply, no matter if the rebase tokens are going through a positive or negative rebase, the user will still own 1% of the network in the end. Thus, to look at the value of rebase tokens, it is more insightful to look at their market capitalization rather than their price.

Ampleforth was the first rebase token where it has a target price peg of $1. After the launch of Geyser, its liquidity mining programme, Ampleforth skyrocketed from a valuation of $10 million to a peak valuation of $687 million. It later helped to inspire the launch of multiple algorithmic stablecoins such as ESD, DSD, FRAX, MIC, and BAC.

How does DIGG rebases?

The rebase mechanism works similarly to Ampleforth. Currently, rebases are scheduled daily at 8PM UTC. Initial supply has been set at 4,000 DIGG. 15% of the initial supply were airdropped to Sett users. There is a yield farm to earn DIGG alongside BADGER for roughly 22 weeks starting from 23rd January 2021.

Below is the formula used to execute the supply rebase, with Rebase Multiplier set at 10 as DIGG aims to reach parity with BTC in 10 rebase periods.

Users can lock up their DIGG in Badger to receive bDIGG. Other than to earn more farming rewards, bDIGG is an attempt to make DIGG more composable in the DeFi ecosystem by making away with the supply changes daily. bDIGG supply will not be influenced by the supply rebases while its value will represent the underlying amount of DIGG, similar to yield-bearing tokens.

What is the risk of investing in a rebase token?

Rebase tokens value is heavily tied with its market demand, but as it lacks intrinsic demand for any usage, currently it is mainly backed by speculation.

Rebase tokens try to stabilise its price through Liquidity Provider (LP) tokens, pairing with tokenized assets that have its target price. For example, for USD rebase tokens, they are usually paired with stablecoins such as USDC or USDT. Meanwhile for BTC rebase tokens, DIGG is paired with WBTC. Normally there will be a yield farming programme for LPs to bootstrap liquidity.

Becoming a LP for rebase tokens is highly risky. For example, in the early stage, there are high yield farming rewards offered for DIGG/WBTC LP UNI tokens. Users who want to earn the rewards will have to provide WBTC to the UNI pool where half of the WBTC will be converted into DIGG, pushing up DIGG price.

At the later stage, rewards normally will reduce and there will be higher DIGG supply in the market. Without any other demand to hold DIGG’s price, DIGG may experience a selloff, where LP will exit through WBTC, causing DIGG’s price to crash. When negative rebase happens, the amount owned by the user will further decrease, inducing panic among users. This will further compound the selloff, initiating a vicious spiral downwards.

Rebase tokens are still experimental in nature. Whether the demand for such financial products is sustainable remains to be seen. Please proceed with caution.

Bitcoin: A New Paradigm in Financial Inclusion in Latin America

Bitcoin offers a solution for economic problems such as high levels of inflation in Latin America, while enabling financial inclusion.

Most Popular NFTs: What Type of NFT is Most Commonly Owned?

Majority of NFTs owned are metaverse and gaming NFTs, followed by PFP NFTs and Art NFTs.