Portfolio
Portfolio New Beam (beta) Price Alert Login and Security Developer's Dashboard Subscription Sign Out
Login Sign Up
Search
Give Feedback
Price alert successfully saved!
Open our mobile app to receive alerts on the go 🙌
Tokenomics data for this coin is currently unavailable.
Please send us a request for coins you would like to see Tokenomics data on. The Gecko team will try their best to curate the data!
In the meantime, check out some other coins that currently do have Tokenomics data here!
Rank #2948

What was the highest price for Dynamic Set Dollar?

What was the lowest price for Dynamic Set Dollar?

What was the 24 hour trading volume of Dynamic Set Dollar?

Where can Dynamic Set Dollar be traded?

The DSD platform is a decentralized protocol that aims to create an uncollateralized algorithmic stablecoin which relies on game theory to maintain its peg at $1.


What is Dynamic Set Dollar (DSD) about? 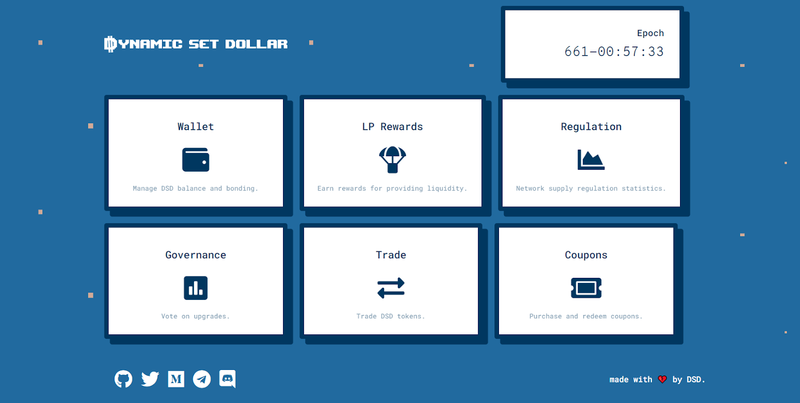 Stablecoins have been around for a while and are quintessential to the crypto industry. However, most existing stablecoins are collateralized by either fiat or crypto assets which goes against DeFi’s call for decentralization. The DSD Protocol was thus formed in late November of 2020 to address a gap in the market and become one of the first truly decentralized stablecoins.

The DSD Protocol came into existence at a time where many other algorithmic stablecoins were really starting to develop. This means that the scene is still in its infancy and highly experimental. The DSD protocol is no exception and has been undergoing many iterations in order to maintain its peg at $1.

The DSD Protocol relies on game theory to control its circulating supply. When the price of a DSD coin goes above $1, the protocol will enter into an expansion phase and start minting DSD coins as rewards to all governance stakers and liquidity providers. By expanding the supply, price will inevitably drop.

On the other hand, when the price of a DSD coin falls below $1, the protocol enters into a contractionary phase where DSD coins will stop being minted. Instead, the coupon redemption system will be unlocked where users may purchase these coupons with DSD coins in exchange for a premium (i.e. receive more DSD coins) but only if the price of a DSD coin reaches $1 or above. The idea is that users burn their DSD coins in exchange for coupons - this reduces the circulating supply and would naturally lead to a price increase.

However, this system has to also factor in user behaviour and overall market dynamics. If users decide to ignore the coupon incentives and not participate in the system as a rational user, it will affect the protocol’s ability to maintain its peg at $1.

Do take note that coupons expire after 360 epochs (30 days).

What can Dynamic Set Dollar (DSD) coins do?

DSD coins are meant to be currency and perform the same role as regular stablecoins i.e. become a medium of exchange and offer reliable store of value.

DSD tokens can be obtained by buying them from an exchange such as Uniswap. You can browse through the various centralized and decentralized exchanges by heading over to our exchanges page here. Alternatively, you can check out DSD’s markets for an overview of the different exchanges DSD is traded on.

What is Optimism (OP)?

Optimism is a Layer 2 solution for Ethereum that's been making waves. Read our guide to know all there is to know about Optimism and its competitors.

Which Industry has the Most Brand NFTs?

Apparel and Luxury Goods outpace all other industries, with 19 out of 52 brands launching NFTs, since 2020